Struggle between generations in Latin America

The emergence of technosociability introduced a source of non-institutional socialization that in less than two decades altered the dialectic between the individual and the collective, reformulating the logic that organized social, political, and cultural life. 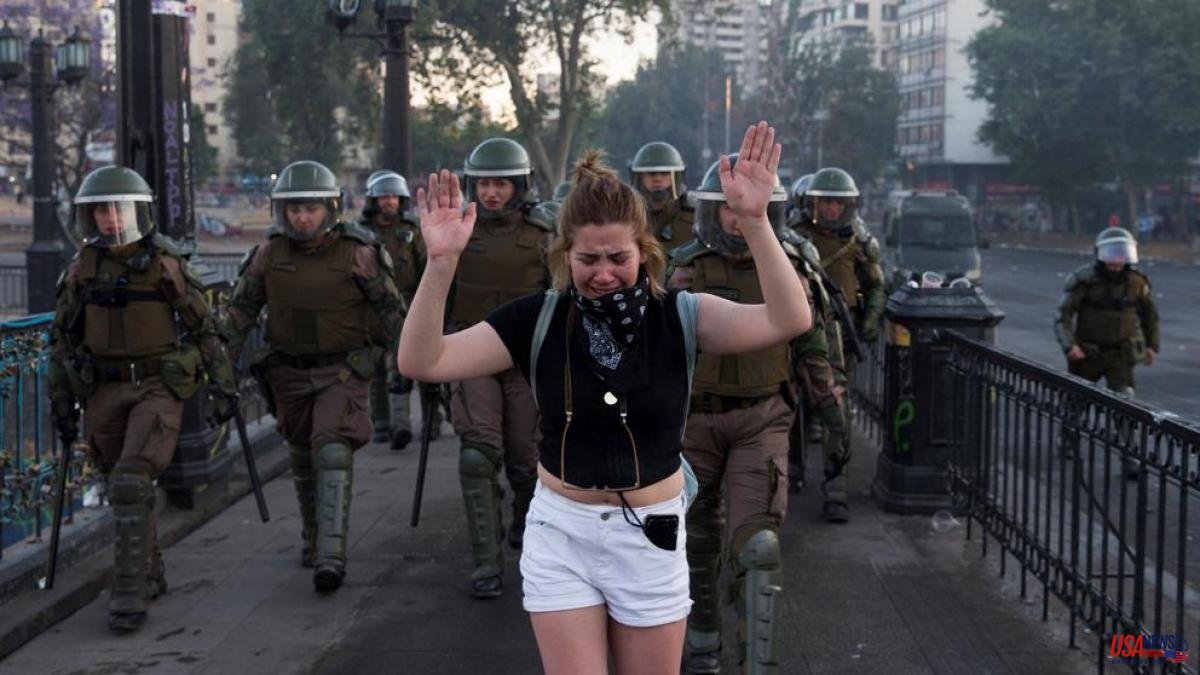 The emergence of technosociability introduced a source of non-institutional socialization that in less than two decades altered the dialectic between the individual and the collective, reformulating the logic that organized social, political, and cultural life. This becomes very evident in the younger generations, where technosociability competes from an early age with the formative roles of the family and school, presenting situations, problems, and relational logics that empathically dialogue with their life experiences. In this way, a divergent cultural codification was generated that became intercomprehensible for the youth of all social strata, and at the same time was declassified from the comprehensive schemes that adults handle, the institutional constellation and the social sciences.

As a result of this sociotechnical phenomenon, which has glocal expressions all over the world, Latin America is witnessing a splitting of reality into two cultural registers, also generational, that are unable to communicate. On the one hand, adults whose cultural patterns became outdated in a short time and today feel challenged by the multiple demands of a technosocial dynamic that they have not fully assimilated and that does not allow them to fully insert themselves into the informational society, from which they Multiply the number of people who, at just 40 years old, feel like foreigners in their own time. On the other side, techno-socialized young people who massively disaffected from a social order whose validity and gravitation diminishes together with the inertial force of modernity, because it is hardly related to their daily lives anymore and because it has stopped giving effective responses to their needs - youth unemployment in Latin America triples that of adults (23.8%)–.1 Faced with this, youths were forced to explore alternative paths while, informally, they developed technosocial knowledge that has a high political impact and productive value each increasingly relevant, but which nevertheless fail to constitute an ordering alternative to the chaos and economic robbery that pierce the democracies of the region.

This complex scenario is usually associated with a crisis of political representation where the most optimistic fight for a recomposition of social trust, the most pessimistic see the proximity of an unavoidable implosion of the political system, and the most irritated demonize the political caste with terms that they come dangerously close to stoning, especially when it comes to left-wing, populist, or neo-developmentalist expressions.2 However, these and other interpretations do not realize that we are facing an epochal problem rather than a disciplinary, institutional, or political one, and that it occurs due to the confluence of some extraordinary and transfigurative phenomena, such as: 1. massive and global access to the potential of a decentralized technological architecture such as the internet;3 2. the exhaustion of the universalizing, continuous, argumentative, ethnocentric and patriarchal narrative in that the cultural project of the West was supported; and 3. two demographic cohorts (millennials and centennials) who abandoned writing and logocentric culture to migrate to audiovisual storytelling, hypertextual dynamics, and the convergence of media and platforms.

In this context, in addition to the rise of former Chilean students to the government, the youth activism that supported Gustavo Petro in Colombia, and the interpellation of the patriarchal order by feminist youth, some South American experiences emerged that exhibit an interesting countercyclical effect. –in addition to political edges– that I would like to review briefly. Above all because they can serve as a reference to think about initiatives that interrupt the escalation of this generational disagreement, in accordance with a reorganization of the socio-productive dynamics and strategies that could improve the regional position in the current international reordering.

Arbusta is an informational company of Argentine origin. Its particularity is that all the employees come from popular sectors in a situation of vulnerability, with some striking data. In 60% of cases, it is their first job in a dependency relationship; 83% had no previous work experience related to technology; more than 50% are women; at the time of admission, 20% did not finish secondary school. The sustained growth of this company motivated a question that became a research interest: how is it that millennials and centennials who were born and raised in social sectors with basic needs that are often unsatisfied and with life experiences developed in marginality or under the social indifference, especially when it comes to women, did they obtain the necessary technological skills to apply in a company that provides computer services with high added value for companies such as Disney, Fox Sport, YPF, Omint, L'Oréal and Mercado Libre?

Federico Seineldin, one of the founding partners, says that it all began in 2013 while he was providing technical assistance4 for a cardboard collectors cooperative located in the Buenos Aires suburbs.5 He remembers that on one of those work days a couple approached him and told him : “What should we do so that our children, when they grow up, do not have to have surgery like us?”6 The question took him by surprise, and he did not know what to answer, so he suggested that they stay with them for a while, to carry out what in social sciences we would call ethnographic work and, after observing their daily dynamics, make them a proposal. In this kind of coexistence, he observed that the children of the cartoneros used the cell phones of the adults with great skill and began to challenge them with some exercises. Seeing that they responded satisfactorily and with increasing avidity, he made the exercises more and more complex. Thus, he warned that: 1. even without knowing the names of what they were doing, the most adolescents had a high development of technological skills; and 2. that, unlike their counterparts in the private sector, where the middle and wealthy sectors are dominant, these young people had the drive to discuss problems and solve them collaboratively. Shortly after, he spoke with the cartoneros cooperative and with different social organizations to create an inclusive innovation company that accompanies the computerization process of large clients; that is to say: only with young labor coming from the social sectors where the largest social debt in Latin America accumulates.7

Attracted by this experience, I started an investigation on which I worked for almost four years. Among the many testimonies collected, I am going to cite two, due to their eloquence and representativeness. That of Bruno DV, its director of operations: “we trained them on some specific issues, but these young people were already digitally literate when they entered Arbusta, because they had access to cell phones and social networks. Then the task of testing becomes a simple task, because it is giving rise to their user experiences and recognizing the flaws of a product. If you add to this the needs that companies have to test their products, you have the capital of people to respond to the demand”. And that of Betiana T, a 26-year-old employee, who says: “when you enter [in Arbusta] you realize that there are a lot of processes and procedures that are natural today and that are useful for working in the IT sector, and that for you they do not represent a challenge because it is part of your life”. Today the company is based in Argentina (Buenos Aires and Rosario), Uruguay (Montevideo) and Colombia (Medellín) and does not stop growing and diversifying its informational services. As a counterpart, and confirming Seineldin's reading, cases of young people who exhibit the same creative, innovative and productive potential arise daily. Gino Tubaro,8 Mateos Salvato,9 L-Gante,10 Mario Maximiliano Sánchez11 and Sebastián Carsorio12 are just the most bombastic Argentine cases of this phenomenon that extends throughout Latin America.

Latin America has a rich tradition in native and popular knowledge that, despite not being declaimed and not having the conditions of possibility to be expressed, managed to transcend the prejudices of coloniality due to the weight of its prestige and its applied value. Thus, they were gaining recognition and extending their reach to production and technical imagination. Along these lines, one could cite Perón's Second Five-Year Plan, when in 1951 he called on Argentine citizens to make productive proposals with a view to being incorporated into a national development program; or the initiative of ECLAC in 1990, when after the fall of the Wall it presented the Productive Transformation with Equity (TPE), as part of a regional strategic plan that was based on the productive potential of the region and on the dialogue between the knowledge of the different cultural traditions. Today, on this background, public, private and academic initiatives arise that recognize techno-social knowledge as an informational agency capacity of today's youth, with an unavoidable political dimension. The Explora Park of Colombia; Laboratory in Peru, Chile, Brazil and Mexico; and the Information Technology in Argentina are some of these approximations.

But I am going to dwell on a project that condenses these experiences into a public policy that arises with the idea of ​​putting them in dialogue and that can be replicated in the region. I am referring to the Technotheques for Argentine Popular Innovation (TIPAR), promoted by the I D i Agency, and which consists of the recognition, recovery and productive articulation of the techno-social knowledge carried by the new generations –especially the popular sectors– , as agents of productive, social, cultural and political transformation. The particularity, as in Arbusta, is the universe to which it is directed: young people who neither work nor study (wrongly called nini) and who, due to the level of their techno-social skills –acquired and developed informally–,13 could be incorporated into the new productive processes, but that are not taken into account due to prejudices and marginalization. The device includes the construction of a 2,000 m2 network of technotecas that will be equipped with the latest technology and will have face-to-face and virtual instances to: 1. recognize one's own technosocial knowledge based on its applicability; 2. Complement them with training that establishes concepts with theoretical volume, and 3. Link them to the productive world, in a broader sense than economics, as a socially productive dynamic that includes small-scale ventures, community participation, cooperatives, and the governance of the institutions of the State. The idea of ​​its promoters is that, starting in 2023, each technoteca trains a significant number of these young people annually so that they can join a broad political-productive project, with public and private components.

In such a delicate global and regional context where, as García Canclini says, there is a "radical indeterminacy of the places of enunciation, circulation and reception of meaning", and where different epistemological registers coexist with different cultural codes, I preferred to avoid references to the many valuable emergents produced by the movement of the indignant, grouped under the banner “the system is anti-us”,14 and highlight experiences that are based on that background, but that combine their potential with careful political and economic listening. Not only because it proves the strategic value of the technosocial knowledge possessed by young people from popular sectors in Latin America to explore the construction of new development models, but also because it is an opportunity to break with the successive layers of exclusion that generated the hopeful migrations of the countryside to the large urban centers and give these youth the role they claim and deserve, joining the regional socio-productive future from power and not from solidarity and sympathy, with an important political volume.

Fernando Peirone is a professor and researcher at the Argentine national universities of San Martín (UNSAM) and José C. Paz (UNPAZ). He is the director of the Interuniversity Observatory for Society, Technology and Education (OISTE).