Having already passed the halfway point in its programming for this torrid summer, last night the Cap Roig Festival hosted someone who could well be considered an old friend of this Costa Brava cycle: citizen Gordon Matthew Sumner, universally known as Sting. 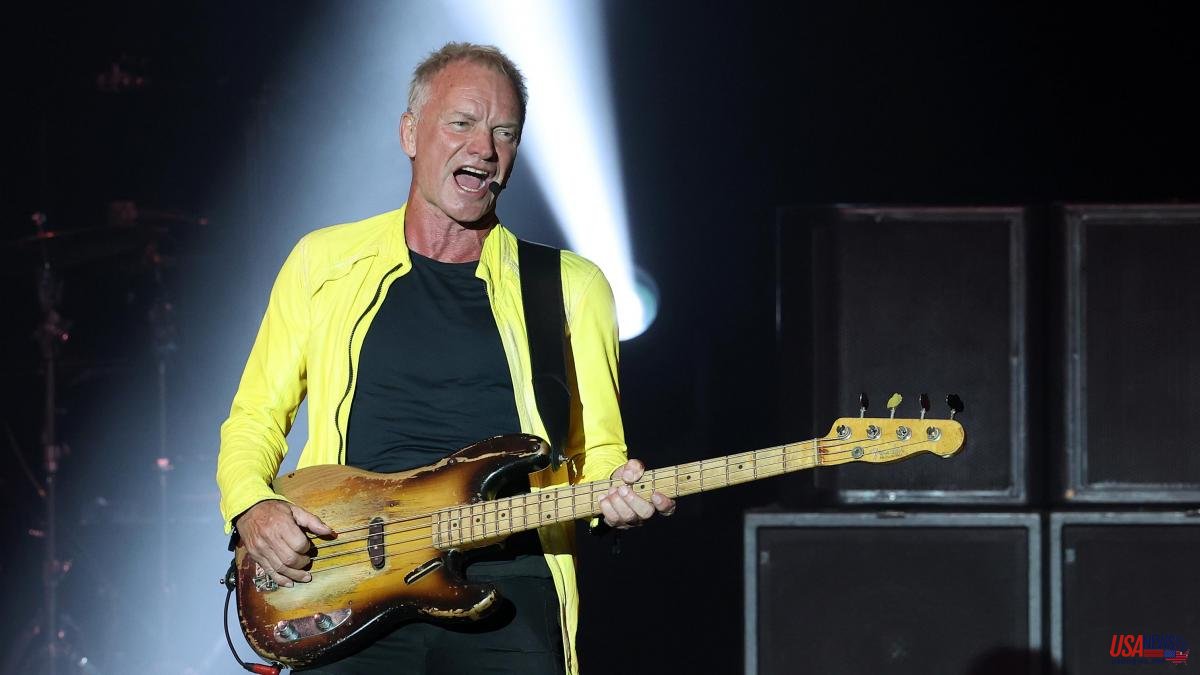 Having already passed the halfway point in its programming for this torrid summer, last night the Cap Roig Festival hosted someone who could well be considered an old friend of this Costa Brava cycle: citizen Gordon Matthew Sumner, universally known as Sting. It is a recurring figure on this stage, and always with excellent results in terms of public response, a fact that was confirmed once again this Monday, since the tickets to attend the concert in question had been sold out well in advance.

A fundamental figure in the pop hemisphere over the last four decades, Sting appeared on the scene in the company of a well-oiled band made up of seven members, including his lead guitarist, Dominic Miller, as well as his son, Rufus Miller.

Dressed in a colorful yellow jacket, our protagonist energetically uncorked the evening, taking us back to the days of The Police with a sure target: Message in a bottle. First episode of a night in which Sting had to review the best of his long seasons in the first division of this business, either with the aforementioned youth band or alone. A frankly ideal menu for the 2,440 attendees who traveled to the gardens that host this festival, with a mature profile in terms of average age.

The musician appeared in Calella de Palafrugell for the third time in the last five years. His last visit before last night was in 2019, in the context of the beginning of the My Songs tour. The same tour that landed this Monday at the festival... although not exactly, since in this interim Sting has recorded a new album, The bridge, composed in the midst of a pandemic and appeared at the end of 2021, to which it logically alludes in the programming of the concerts he is performing this summer. He too has joined the septuagenarian rock club, a fact that is happily not incompatible with the excellent form he showed in the opening stages of Monday's concert.

Armed with his characteristic and very historic Fender electric bass, Sting continued his performance with a song of his particular vintage, the Englishman in New York that raised passions, to later reconnect with the very alive heritage of The Police through Every little thing she does is magic. How magical was the atmosphere that, at this stage of the film, was already being experienced in the Empordà auditorium, with an audience that delighted in the proposal that the Briton and his partners officiated. The team had come to these latitudes from Vigo, where they performed last Saturday night. Calella was Sting's fourth and last visit this summer to Iberian lands, and the only one he has made in Catalonia.

The song If it's love was also played, belonging to the most recent album by Sting, who also sang in Spanish Por su amor, the version of For her love that he recorded this spring with the Mexican Kurt.

With a Sting full of form, voice and attitude, the rest of the gala went through great balls of the career of the musician of the caliber of Shape of my heart, Fields of gold or Fragile, a theme of calm profiles with which he ended the party. All of this, naturally, together with samples of his repertoire from his stage with The Police of both hooks such as Every breath you take or the round Roxanne, among other gems.