Spain, European champion: this is how a collective is crowned

Well into the second quarter, Juancho Hernangómez turned the appointment into gibberish for the French. 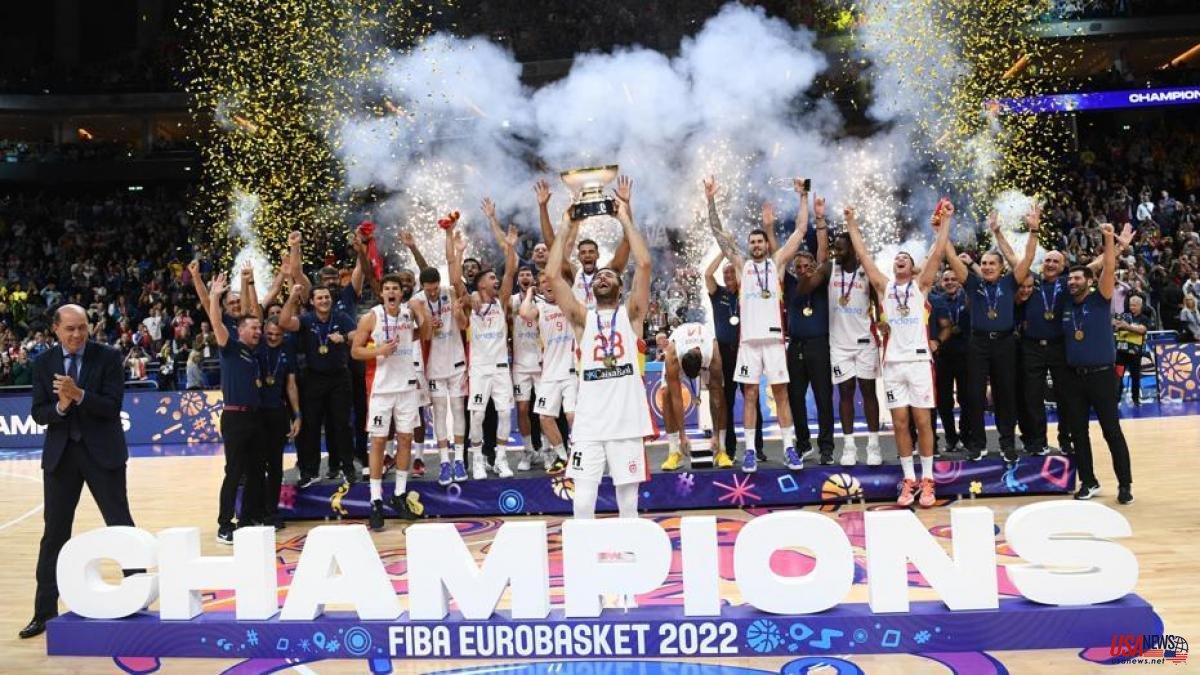 Well into the second quarter, Juancho Hernangómez turned the appointment into gibberish for the French.

He signed his sixth triple of the final (six of seven attempts in just ten minutes on the court! He would round off his performance with 27 points, with seven triples in nine shots and five rebounds, becoming the MVP of the final), he placed Spain 19 up (45-26) and seemed to be on track, even though it was very early, for the Eurobasket title, the fourth for the Spaniards in the last thirteen years (2009, 2011 and 2015).

Well, until then, the French group did not shoot.

The powerful Gobert, the king of rebounding in the NBA and also in this Eurobasket, did not appear, nor did Fournier or Yabusele, that magnificent Yabusele who had overwhelmed Poland in the semifinal (22 points that day). And on the bench, Vincent Collet, the father of the French creature, was sweating and tearing at his hair, as if asking himself: "What the hell?"

Right, what the hell was that?

Where did this perfect Spain come from, synchronizing every move, sacrificing defense, blocking French shooters and scoring from any shooting line?

Really, was there that much difference between one set and the other?

And the moments that followed were going to prove it.

Suddenly Fournier (seven consecutive points), Heurtel and Yabusele appeared, and the French registered a partial 0-16 and the Spanish advantage was reduced to 47-42.

The end of easy money seemed to be coming, and that was why it was Scariolo who now put his index fingers to his temples and asked his men:

Then the Spanish collective claimed its claim, that stony block that, mounted on its chariot, has toured the tournament, growing step by step until becoming invulnerable at any committed moment of this Eurobasket, this time in the grand final and against a fearsome opponent.

Now Willy Hernangómez (MVP of the tournament, the leader of the team) emerged, and in his wake his dolphin Lorenzo Brown and the unexpected Jaime Fernández (eight points in a flash) and Alberto Díaz, and Scariolo's team recovered the pulse (61-48 and, already in the last quarter, 80-68) and the French returned to lose their configuration, because they definitely did not know what to do to deactivate that Spanish arsenal.

Magic had been made by Scariolo, who has won the four European finals that his Spanish team has played, and who has done so by recycling himself over and over again, remaking himself even now, when there is hardly anything left of that portentous generation of Gasol, Navarro, Calderón, Sergio Rodríguez, Ibaka or Mirotic, if anything the autumnal presence of Rudy Fernández, as sporadic as it is opportune throughout this tournament.

Seven rookies had taken Scariolo to the Eurobasket, and in the run-up a shadow seemed to hang over the team, described as gray by the environment, because –it is assumed– the Hernangómez are not the Gasols and Lorenzo Brown barely speaks Spanish and has come out of the blue (express nationalization) and neither escorts nor flashy eaves appeared.

All that was said or thought beforehand.

But they talked in vain.

Well, game by game, the Spaniards were contradicting the skeptics, those who rushed their criticism until the last moment, predicting downpours even at the end of the second quarter.

In the Eurobasket of the stars Antetokounmpo, Jokic, Doncic, Gobert or Markkanen, the choral performance of the Spaniards has monopolized all the spotlights until eternal.

His are four of the last six editions, play stars or play day laborers, like now.