We had to wait until the last game to see the best Spain in the tournament. 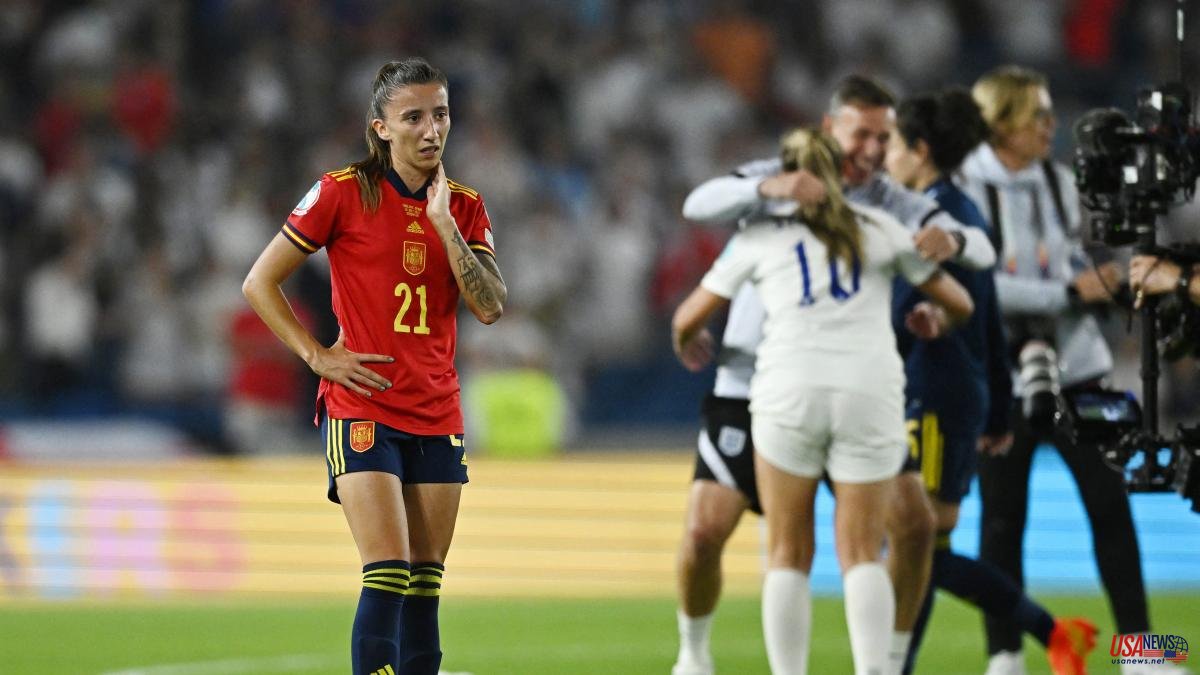 We had to wait until the last game to see the best Spain in the tournament. And despite this, it was not enough to reach the semifinals. The red was the only team that has been able to score against England in this European Championship, but Ella Toone neutralized Esther González's goal and sent the game to extra time, where a shot by Stanway gave the hosts the classification. Spain remains at the gates again and still does not know what it is to overcome a tie in a final phase -it lost in the quarterfinals in 2017, 2013 and in 1997 in the semifinals, when it was accessed directly from the quarterfinals- and ends, with dignity, to his European adventure.

Jorge Vilda surprised with a new eleven in which Tere Abelleira entered in the interior position, accompanying Patri Guijarro and Aitana Bonmatí. The young Real Madrid midfielder, who hadn't played a single minute this European Championship – and barely 15 minutes in two games with Spain throughout the year – made her debut as a starter against the almighty England and delivered.

It was not the only change introduced by the Spanish coach, who completely modified the lead of the last match against Denmark, repositioning Mariona Caldentey on the left, recovering Esther in the lead and starting with the scorer of the last duel, Marta Cardona. And finally, after three games in which almost all the danger from the rivals had slipped down the left wing, Vilda decided to change Leila Ouahabi and line up Olga Carmona in her place, a success. The Sevillian unhinged one of the stars of England, a Mead who after 25 minutes changed wings for Hemp, unable to overcome her on this side.

Spain played at a high level, they knew how to withstand the initial pull, when England had possession of the ball, and as the minutes progressed they gained confidence and dared to step up the attack against an England that was frustrated at times, unable to score. But Sarina Wiegman's team were not the only ones who had problems to drill the rival goal. Despite the great game he was doing, the red one could not see the goal. Jorge Vilda ordered Athenea del Castillo to warm up, who replaced Marta Cardona at halftime. And from his boots would come out in minute 54 the assistance of the goal that would put Spain ahead on the scoreboard. Esther González, annulled by Bright during the first half, received, controlled and finished off with a cross shot to the bottom of the Earps' goal. England conceded their first goal in the entire European Championship and Spain had to play with their anxiety to keep them out of the match.

The hosts gave some fright, but Paños was very safe rejecting any attempt and as the minutes passed, the Spanish victory was becoming more and more real. An electric Athenea del Castillo continued looking for the sentence sneaking into the area to the despair of the English. Wiegman moved the bench looking for a more direct and effective football and the effect emerged. With five minutes to go, a cross from Russo ended at the feet of Ella Toone, who sent the ball into the back of the net to send the game into extra time. The stadium collapsed and the fans erupted in a deafening scream of rage. The hostess re-entered the match. Spain fought the tie until the end, but a shot from outside the Stanway area in the first part of extra time gave England the classification.

At least he will have the consolation of having fallen with dignity against one of the greatest adversaries. An England that aspires to everything, that exuded confidence in all its players from the first minute of the warm-up. A team that has the fans devoted to them, who vibrated with their players in each pass and pushed them to victory. A team that had already won before the ball began to roll with those thousands of throats chanting the names of its stars. Some stars who hope to continue their journey to Wembley and be crowned European champions for the first time in their history.

Incidents: Match corresponding to the quarterfinals of Euro 2022 played at the Amex Stadium in Brighton (England) before 28,994 spectators.