The British group Soul II Soul performed yesterday for the Barcelona public for the first time in its 34 years of life –they had only held private concerts here– reeling off songs from their concise but catchy discography. 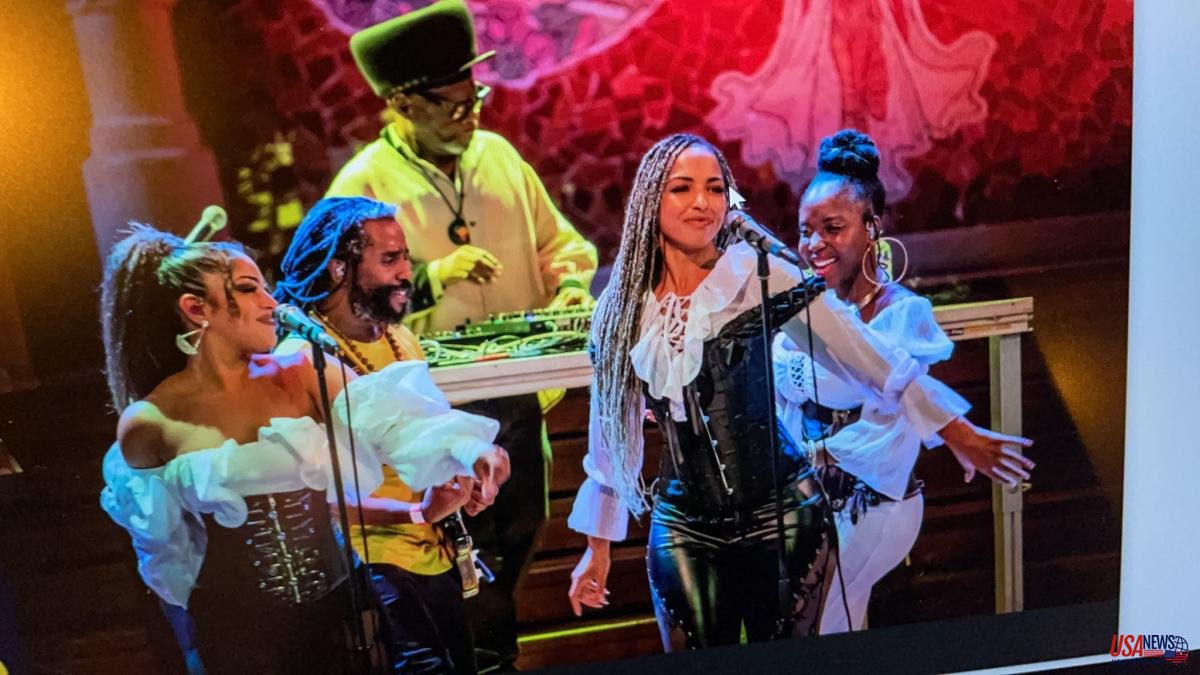 The British group Soul II Soul performed yesterday for the Barcelona public for the first time in its 34 years of life –they had only held private concerts here– reeling off songs from their concise but catchy discography. They only recorded five albums, between 1988 and 1997.

The band opened the Mas i Mas Festival with its special bath of urban rhythms made in the U.K. that despite the time that has passed, they preserve the sophisticated and classy style that they once breathed into black music. Proof of those successes was the full capacity of the Palau de la Música Catalana, with almost two thousand tickets sold for its capacity.

A heterogeneous public gathered in the modernist room. There were plenty of people nostalgic for those fabulous '90s and the occasional young person –“we're Danes on vacation and we've seen that there was this festival...”–, always ready to enjoy a group that guarantees dance moves.

Had he been able to do without the seats, the concert hall could have ended yesterday as a five-star record. The body asked for it in mythical songs like that Back to life with which the band triumphed in 1988 and that here put an end to the concert between resounding applause. Too bad it wasn't sung by Caron Wheeler, one of the three original members who follow and who unfortunately has fallen off the tour.

Instead, Nadine Caesar opened fire with Zion, a track from the band's latest album, Believe, whose violin play harkened back to a James Bond scene. It was followed by Fairplay from the debut album Club Classics. Vol 1, whose success led them to repeat in 1990 with Vol. 2, marking the flow of the parties for a whole decade.

Blessed craving the one that Joan Mas has had bringing a band that in the Barcelona of the Olympic fervor made the dance floors delight. A city that at that time was extremely permeable to proposals bordering on acid jazz and in this case acid soul. We are talking about the Young Disciples, Incognito, James Taylor Quartet, US3 or the special Galliano who in 1991 attended the Aliança del Poblenou with the secret attitude of London clubbing combined with atypical clothing.

That Barcelona briefly resurfaced yesterday during the reunion with Soul II Soul, which coincides –curiously– with the anniversary of the Olympic Games. Jazzie B, creator of the band and well-known DJ, led the concert from the production table, although the sound was not as clean as expected.

Along with Caesar, three vocalists were in charge of raising the respectable from their seats, seconded by bassist Chris Brown, drummer Julien Brown, violins by Gill Morley and Ellen Blair, guitar by Kashta Tafari and keyboards by Nathan Johmson and Brian Henry. . All of them dressed in lace and corsets typical of the Prince era, they did not live up to their name by performing a strange and uninteresting version of Nothing compares to U.

He enhanced the night with mythical melodies like Keep on movin', which was sung by another Soul II Soul legend, Charlotte Kelly, with the typical blonde hair and dreadlock. And other recognizable melodies followed, such as Dream's a Dream, Today, Universal love or Holding on , a combination of hip hop, reggae, funk and pop that gave Afro-British music a shake three decades ago, with the self-confident good-naturedness of a tribe that Originally it was really cool.