Solved the mystery of the purple gold of the Alhambra

Two researchers from the University of Granada have finally managed to solve a mystery almost as old as the Alhambra itself: what are those enigmatic violet stains that are spreading over some decorations of the Andalusian complex, making it ugly. 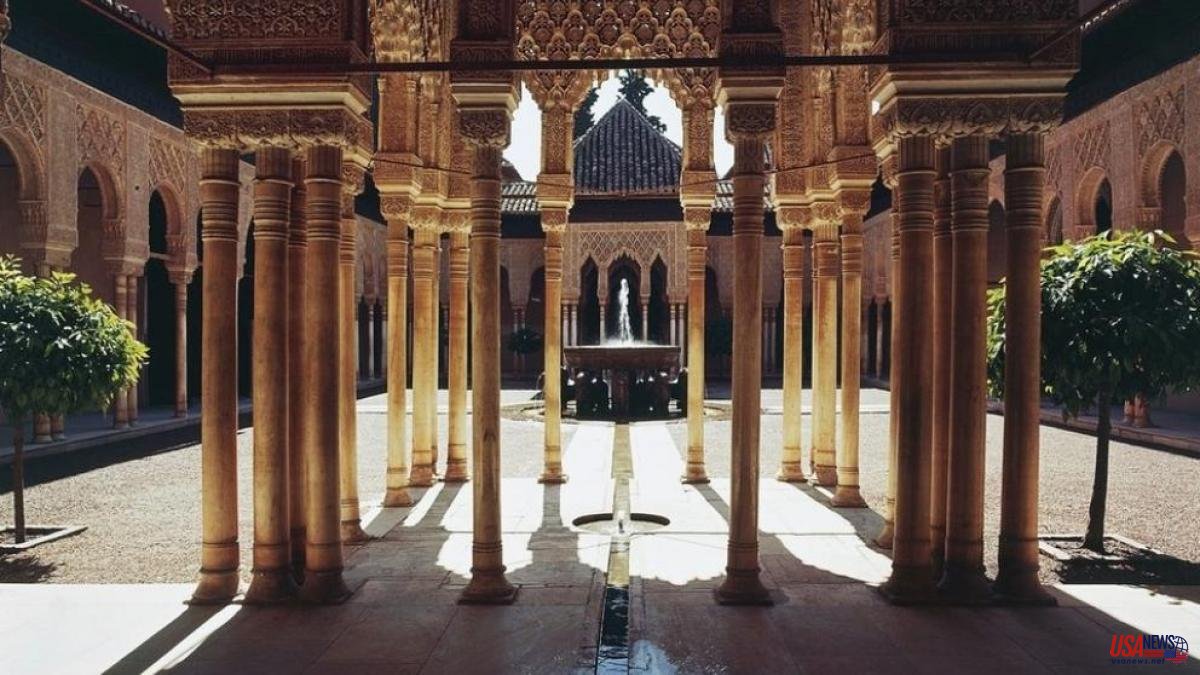 Two researchers from the University of Granada have finally managed to solve a mystery almost as old as the Alhambra itself: what are those enigmatic violet stains that are spreading over some decorations of the Andalusian complex, making it ugly.

After almost 30 years working on this monument, the scientists have discovered that the appearance of this color on the surface of the plasterwork of some palaces, such as that of the Lions, is the result of an electrochemical corrosion phenomenon that makes the gold transform into violet nanoparticles.

This finding, published in the journal Science Advances, can not only help prevent the gilding of the Alhambra's plasterwork from further deteriorating and improve its conservation, but it can also be applied to many other monuments and pieces of art that have gold overlay, such as those dating from the Renaissance, a time when layers of gilding were widespread.

Since construction was completed 800 years ago on the Sabika hill in Granada, promoted by the Nasrid dynasty, some of the ornamental gold that decorated it had been deteriorating and purple flecks had appeared on the surface of the plasterwork. . In fact, the degradation of some areas was already such in the 19th century that, in an attempt to restore it, white plaster layers were applied over the gold.

Until now, however, although the authors had documented the purple color, its origin and the process that caused it and how to stop it were unknown.

In the 1990s, the researchers Carolina Cardell and Carmen Navarrete characterized the polychromes of the Alhambra and verified that this violet was not a pigment applied as a pictorial material in the ornamentation of the monument. At that time, the lack of high-resolution technology did not allow them to find out the origin of the color or explain the processes of alteration of the gold that had led to the violet.

"We saw that it only happened on some gildings that consisted of a thin sheet of gold placed on a sheet of tin," Cardell explains to La Vanguardia. "These golds were very altered, with grayish, purple spots and whitish areas," he adds, "in areas semi-exposed to the weather and humidity."

The situation changed about 10 years ago, when the Center for Scientific Instrumentation of the University of Granada acquired several very high-resolution electron microscopes with which Cardell and Guerra were able to analyze samples of dorado.

Until then, "we didn't know what it was and discovering that it was gold nanospheres deposited on the white layer of plaster was a huge surprise," recalls Guerra. But how had they been formed?

Since the Middle Ages it has been known that gold can be dissolved in aqua regia, a mixture of concentrated nitric acid and concentrated hydrochloric acid. This is how the Purple Cassio pigment was synthesized, a highly coveted and expensive color due to how difficult it was to obtain. However, aqua regia had not been used in the Alhambra, but the purple gold was due, as the researchers discovered, to "a curious combination" of electrochemical corrosion processes. "For these to occur, an electrolyte is needed to act as an electrical conductor, which in the case of Granada is provided by the environment rich in chloride aerosols," says Cardell.

The gilding, in question, of some palaces of the Alhambra had been made by burnishing a sheet of gold on a sheet of tin; In this process, small fissures are produced in the gold foil, which look like volcano craters, which put the solution rich in chlorides in contact with the tin; then, it oxidizes, corrodes, forms tin oxides that come out of those craters and are deposited on the surface of the gold sheet, but not continuously, but forming a kind of dirt islands. And that causes a specific type of corrosion that causes the gold to dissolve and then return to its metallic state in the form of nanospheres of, above all, 70 nanometers, which give it its purple color.

Although the alteration mechanisms that have operated are irreversible, because it is a combination of corrosion processes that have damaged the gilding in such a way that it is impossible to return it to its original state, these results give conservators and restorers valuable information for decide the best methods of intervention of this ornament that covers the plasterwork of the Alhambra, consider the authors of this work.