Solidarity with Minister Irene Montero, insulted yesterday in the plenary session of Congress by Vox deputy Carla Toscano, has transcended Spanish borders and prominent political figures in the international sphere, particularly from the left, have shown their support for the head of Spanish equality, the main target of criticism for the reduction of sentences for sexual abusers after the entry into force of the law of Comprehensive Guarantee of Sexual Freedom, better known as the law of only yes is yes. 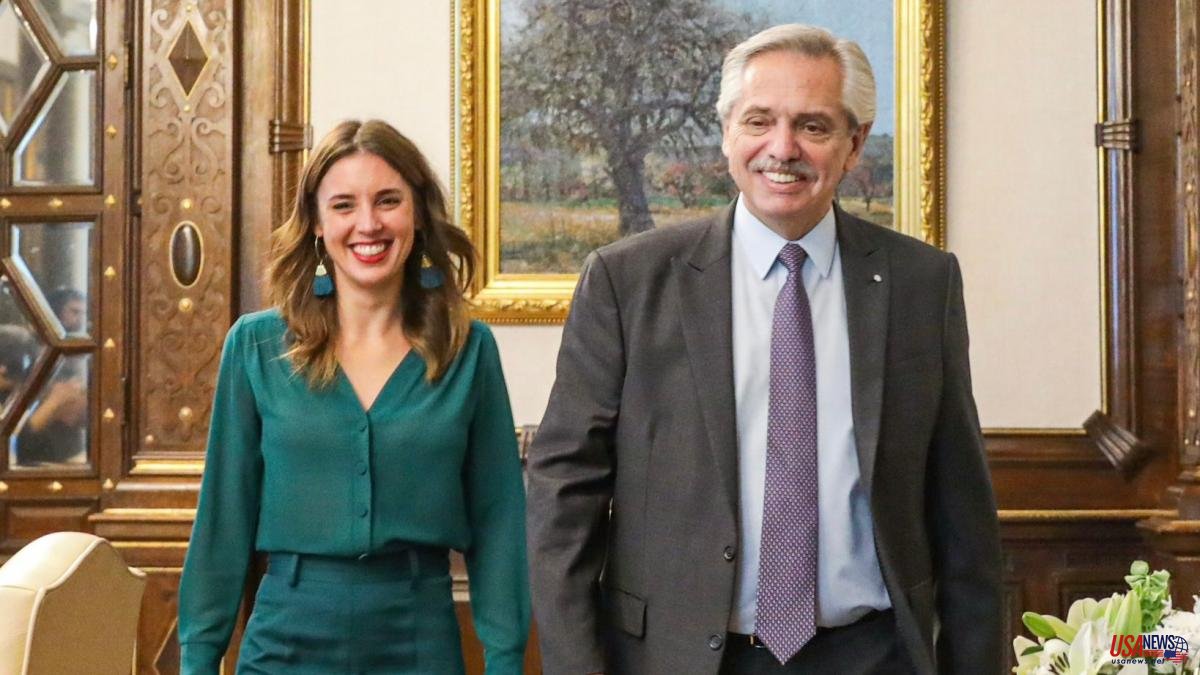 Solidarity with Minister Irene Montero, insulted yesterday in the plenary session of Congress by Vox deputy Carla Toscano, has transcended Spanish borders and prominent political figures in the international sphere, particularly from the left, have shown their support for the head of Spanish equality, the main target of criticism for the reduction of sentences for sexual abusers after the entry into force of the law of Comprehensive Guarantee of Sexual Freedom, better known as the law of only yes is yes.

The most prominent are the presidents of Argentina and Chile, Alberto Fernández and Gabriel Boric, respectively. "Political and sexist violence against women is intolerable, and we must strongly repudiate it every time it happens," warned the head of the Argentine State to show his solidarity with Montero, "victim of cruel attacks" in a tweet that he accompanied with a photo of both

For his part, the Chilean head of state has supported Montero, "a tireless companion in the fight for greater justice and equality that today is facing a new uproar of political violence from the extreme right." "You are not alone Irene. A transoceanic hug!" Boric sent her.

The minister has been thanking each of these tweets for the shows of support and solidarity, as she has done with the message from the founder of the France Insoumise movement and French MEP, Jean Luc Mélénchon, or his co-religionist Manon Aubry. The first in Spanish: "Surprised by the violence of the political methods of the Spanish right against Irene Montero. What way is this to make debate impossible in a democracy?" Mélénchon wondered.

The second, in French, to denounce that Montero "is the target of violent and sexist attacks from the right and the extreme right." "On behalf of the left in the European Parliament, I want to give all our support and friendship to Irene: we are together!", He insisted from her Twitter account, accompanying the message with the label

With the same label has written the German MEP Martin Schirdewan co-chairman of the group of the Left. "The attacks on our colleague Irene Montero are unacceptable! We will not be intimidated to continue fighting for social justice, more democracy and equality!" He warned.

Solidarity with the head of Equality has also come from the Nordic countries. Thus, the MEP from the Left group, Nikolaj Villumsen, has expressed his support for the house from Denmark. "All our solidarity with Irene Montero and Podemos from Enhedslisten (the Red-Green Alliance), Denmark. Sexism and hatred is never acceptable. We are united in the fight for equality, democracy and justice", a message also accompanied by the hashtag

The first to show solidarity with the minister yesterday were her co-religionists who, while Toscano released her expletives, protested by hitting the seat, to which other groups were added, forcing the vice president of Congress, Alfonso Rodríguez Gómez de Celis, to intervene announcing the withdrawal of the allusions to the far-right deputy in the act and calling her to order for the first time.

Toscano's intervention began with a "liberator of rapists" addressed to the minister, whom he attributed to having a face "made of reinforced concrete" to label the judiciary as macho when the "only merit" of the minister is "having studied in depth Pablo Iglesias". She added that it is "the worst thing that has happened to Spain in recent years" and reiterated the discourse on the existence of feminist beach bars to profit from "fictitious groups." She also said that her Ministry encourages hatred of men.

Montero asked that those words not be withdrawn from the minutes, so that they would be recorded as a testimony of the violence of the ultra-right and stood up for the progressive parliamentary groups of the Chamber.

From there, various ministers, both socialists and from the purple space, gave their support to his partner and the Prime Minister, Pedro Sánchez, condemned Toscano's words. "We are together against sexist violence. Denying it is a way of exercising it. Raising it to the rostrum of Congress is crossing an intolerable line. We will move forward with conviction and determination. All my support, Irene Montero," he said on Twitter.

Even the general secretary of the PP, Cuca Gamarra, distanced herself from the personal offenses against Irene Montero, while the former deputy of Vox Macarena Olona regretted that Montero left "on the shoulders" of Congress, "as a victim."