A chime every minute for 96 minutes - one for each year that Queen Elizabeth II lived - marked the countdown to the beginning of the last goodbye to the sovereign, who died on September 8. 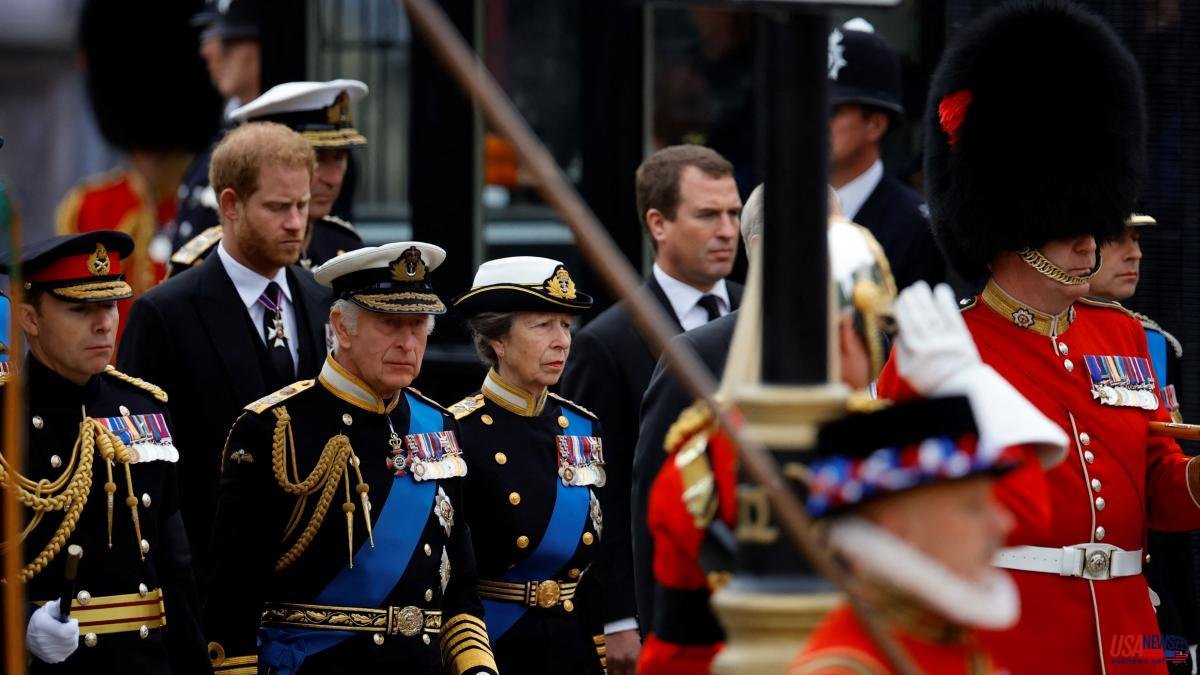 A chime every minute for 96 minutes - one for each year that Queen Elizabeth II lived - marked the countdown to the beginning of the last goodbye to the sovereign, who died on September 8. It was the only sound, along with the solemn notes of the organ, that was heard Monday morning inside Westminster Abbey, where 2,000 guests, squeezed into their seats, awaited the arrival of the coffin in respectful silence.

Presidents and kings, princes and prime ministers from around the world, as well as politicians and members of the British emergency services, slowly but surely arrived at the church that crowned the monarch 70 years ago. Outside, more than a million people crowded the entire route that the funeral procession will follow while another 4,000 million people connected to follow the funeral of the century.

The day, declared a national holiday, is full of funeral acts both in London and in Windsor. It started early, when the doors to the 900-year-old Westminster Hall were closed to mourners after hundreds of thousands filed in front of the coffin draped with the royal banner. Shortly after the doors of the abbey opened, where 500 international leaders attended on board buses (with the exception of US President Joe Biden, the only one who has used his official vehicle).

And silence fell over London again. With British punctuality, the queen's coffin left the seat of the British Parliament at 10:44 a.m. (local time) on the back of Grenadier Guards, who deposited it on a 123-year-old gun carriage and guarded by 142 of the British Navy. The emotional sound of the bagpipes and the beating of the drums marked the passage of the majestic procession, which was joined on foot by King Carlos III and Princess Ana among other members of the royal family, and which was accompanied by the coffin to the abbey.

The sweet voices of the children's choir of Westminster Abbey sang, as is tradition, some verses known as The Sentences, with music by the English composer William Croft, performed at all state funerals held in this country since the beginning of the 18th century. Meanwhile, the queen's coffin was introduced into the abbey up to the foot of the altar.

The queen has been consulted for many years about arrangements for her own funeral, which has been arranged by the Dean of Westminster, David Hoyle, who also gave the opening blessing. "Here, where Queen Elizabeth II was married and crowned, we gather from across the nation, from the Commonwealth, and from every nation in the world to mourn our loss, to remember her long life of selfless service. "said the reverend.

Instead, the sermon was delivered by Justin Welby, Archbishop of Canterbury. "Few leaders receive the outpouring of love that we have seen", were some of his words, at the same time that he remarked how the pain felt by so many in the United Kingdom and in the rest of the world reflected the "abundant life and loving service" of the late monarch. Prime Minister Lizz Tuss and Commonwealth Secretary General Patricia Scotland read excerpts from the Gospel of John and the Bible, respectively.

The abbey choir was joined for the other hymns of the ceremony by the choir from the Chapel Royal at St James's Palace, under the direction of organist James O'Donnell. The first hymn to be sung at the ceremony was The day thou gavest, Lord, is ended, which was also sung during Queen Victoria's Diamond Jubilee in 1897 and at the handover of Hong Kong to China in 1997.

The choir also sang Psalm 42, written especially for Judith Weir's funeral and inspired by "the queen's unwavering Christian faith." The hymn that was played at the wedding of the monarch - then Princess Elizabeth - and Philip of Mountbatten, in 1947: The Lord's my shepherd, I'll not want, based on Psalm 23, was also heard in the abbey.

Other musical pieces prepared for the ceremony were, as confirmed by Buckingham Palace among its preparations, the Fantasia of four parts by Orlando Gibbons, the Romanza (Symphony number 5 in D) by Ralph Vaughan Williams or the Reliqui domum meum by Peter Maxwell Davis. Julian Sandford led the Household Cavalry State Trumpeters and Peter Holder played the organ.

After the final blessing, the trumpets and... the United Kingdom fell silent for two heartfelt minutes. In the abbey, in the streets and in the sky (Heathrow airport announced that no plane would fly at that time out of respect for the queen) the silence weighed on the atmosphere.

The funeral concluded with the royal piper's performance of the lament Sleep, dearie, sleep, after the congregation sang the national anthem (God save the King). The lament was performed by Paul Burns, piper of the Royal Regiment of Scotland, in one of the most moving moments of the church service.

Royal Canadian Mounted Police led Elizabeth II's funeral procession out of Westminster Abbey, en route to Wellington Arch, where her remains arrived after 1 p.m. local time. There the coffin was transferred to a hearse to take her to Windsor Castle, outside London.

The coffin, raised on the same gun carriage and pulled by the aforementioned hundred sailors, went through the streets of the center of the British capital in procession, followed on foot by King Charles III, Prince William of Wales and other members of the family royal, some of whom were in vehicles (such as the Queen Consort, the Princess of Wales and the Duchess of Sussex). In addition, more than 3,000 soldiers from various corps and regiments paraded in the funeral procession, each with their own music band. The rhythms of the march animated the streets of a city that had been buried by an unusual silence during the first hours of the day.

Elizabeth II's coffin is expected to arrive in Windsor, about 35 kilometers west of London, around 3:00 p.m. local time. There she will travel in procession the nearly five kilometers of the Long Walk, the characteristic tree-lined avenue that leads to Windsor Castle, the royal residence where the queen used to spend the most time.

Hundreds of people lined the route the flower-dropping hearse traveled from the capital to Windsor, where a service has been held at St George's Chapel. Upon arrival at the castle, a private family service was held, attended by members of the family and people closest to the queen (about 800 guests).

The coffin of Elizabeth II has been lowered to the royal vault of the chapel after the religious ceremony After removing the imperial crown, the orb and the sceptre, symbols of the reign and power of Elizabeth II, the coffin entered the crypt to the sound of lament of a Scottish piper.

Later, a new religious service but of a private nature, reserved for the British royal family, will say goodbye. The remains of Elizabeth II will be interred next to the tomb of her husband, the Duke of Edinburgh, in the royal crypt at Windsor.