Sánchez warns that Feijóo remains "isolated and portrayed" in his rejection of the energy tax: "Vote against common sense"

"To win the elections!", Pedro Sánchez has cried. 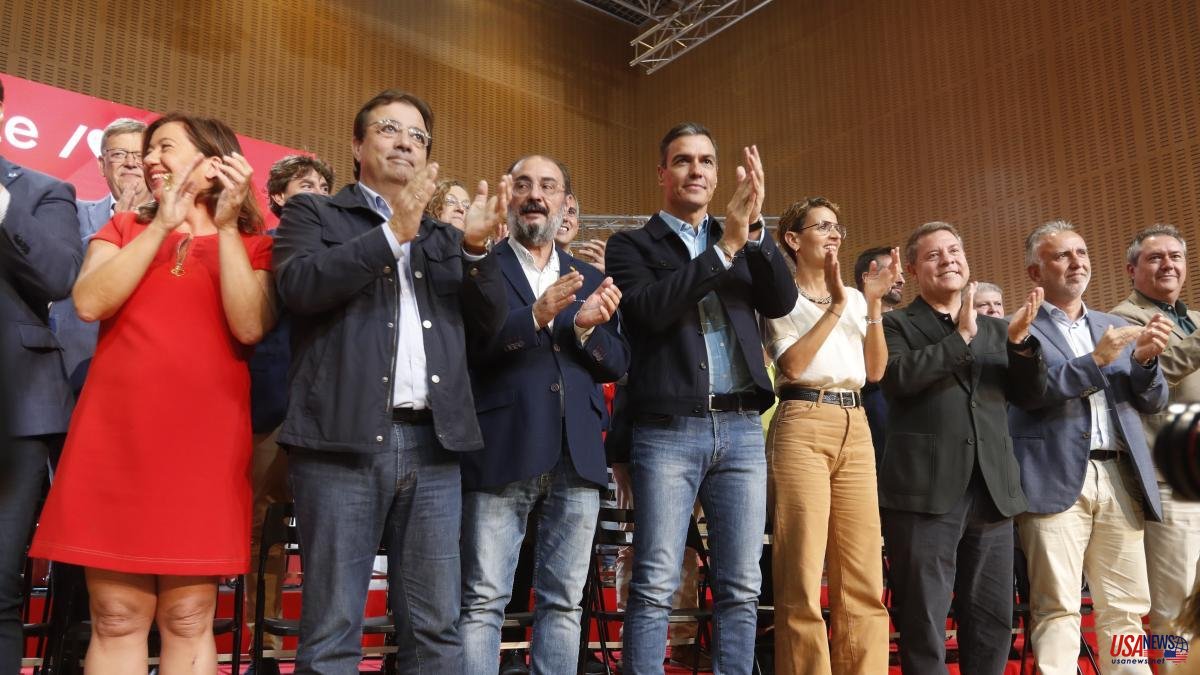 "To win the elections!", Pedro Sánchez has cried. The President of the Government has exhibited this Saturday the power and the socialist territorial muscle, by bringing together in Zaragoza all the regional presidents and leaders of all the federations and the PSC in a Federal Policy Council of the PSOE which, in the words of the host, the Aragonese Javier Lambán, "is the starting signal of the race" for the municipal and regional elections that will be held on May 28 next year.

Sánchez has taken advantage of the public act that has been held after the internal meeting, which has laid the foundations for the electoral programs of the municipal and autonomous communities, to highlight his management of the energy and inflationary crisis, with a speech with a clear social democratic accent in the who has confronted his defense of the welfare state with the neoliberal prescriptions that he blames on the right. And he has attacked, in this sense, against "the denial opposition" that he has attributed to the leader of the Popular Party, Alberto Núñez Feijóo. “The right votes against common sense”, he has denounced.

The head of the Executive has warned that Feijóo's opposition strategy has been "isolated and portrayed" after the PP voted against the new taxes on extraordinary profits from banks and energy corporations. Sánchez celebrated that, instead, "the European Commission supports and endorses the Spanish Government's proposal to reform the energy market and create a tax on large electricity companies." “If the Government of Spain says so, is it bad because it is leftist and if Brussels says so, is it good because it is liberal? Neither one thing nor the other, it is pure common sense”, he stressed.

Sánchez has insisted that his political project can be summed up in one word: “Dignity”. “The pandemic will pass, as will this damn war and its collateral effects on inflation. Inflation will subside sooner rather than later, but what we cannot allow is that these crises be at the expense of the middle and working class and their dignity. We will not allow that! ”, He has cried.

The President of the Government has used his policy of "social and fiscal justice", and has announced that the Council of Ministers next Tuesday will approve both the reduction of VAT on gas, from 21% to 5%, and an injection of 172 million euros to strengthen primary care in the national health system.

The leader of the PSOE has ensured that this act shows "the strength of a party that is fit and united and goes out to win the elections." Sánchez wanted to highlight during his speech the figures of the leader of the PSC, Salvador Illa, who received one of the most enthusiastic applause of the event – ​​just now that some socialist sectors are betting on the former Minister of Health to lead the candidacy for mayor of Barcelona-, and the new general secretary of the Madrid Socialists, Juan Lobato, who has also been given a special role in view of his difficult endeavor to face Isabel Díaz Ayuso in May for the throne of Puerta del Sol.

The act was attended, among ministers and territorial leaders and the Ferraz executive, by the nine autonomous presidents of the PSOE who are up for re-election next May, in principle, with many options to retain their positions. Thus, the Aragonese Javier Lambán, who today has acted as host in Zaragoza and has assured Pedro Sánchez that "he will have the whole party behind", in his attempt to stop the change in the political cycle throughout Spain promoted by Alberto Núñez Feijóo at the head of the PP; and also Ximo Puig from Valencia, Francina Armengol from the Balearic Islands, Emiliano García Page from Castile-La Mancha, Guillermo Fernández Vara from Extremadura, María Chivite from Navarra, Ángel Víctor Torres from the Canary Islands, Concha Andreu from Rioja and Adrián Barbón from Asturias.