Sánchez replies to Aragonès that the referendum debate is over: "It's not going to happen"

"The independence movement, as a political project, goes against the times," Pedro Sánchez warned in his year-end balance appearance at Moncloa, after the president of the Generalitat, Pere Aragonès, demanded to open the Negotiation to agree to hold a self-determination referendum in Catalonia. 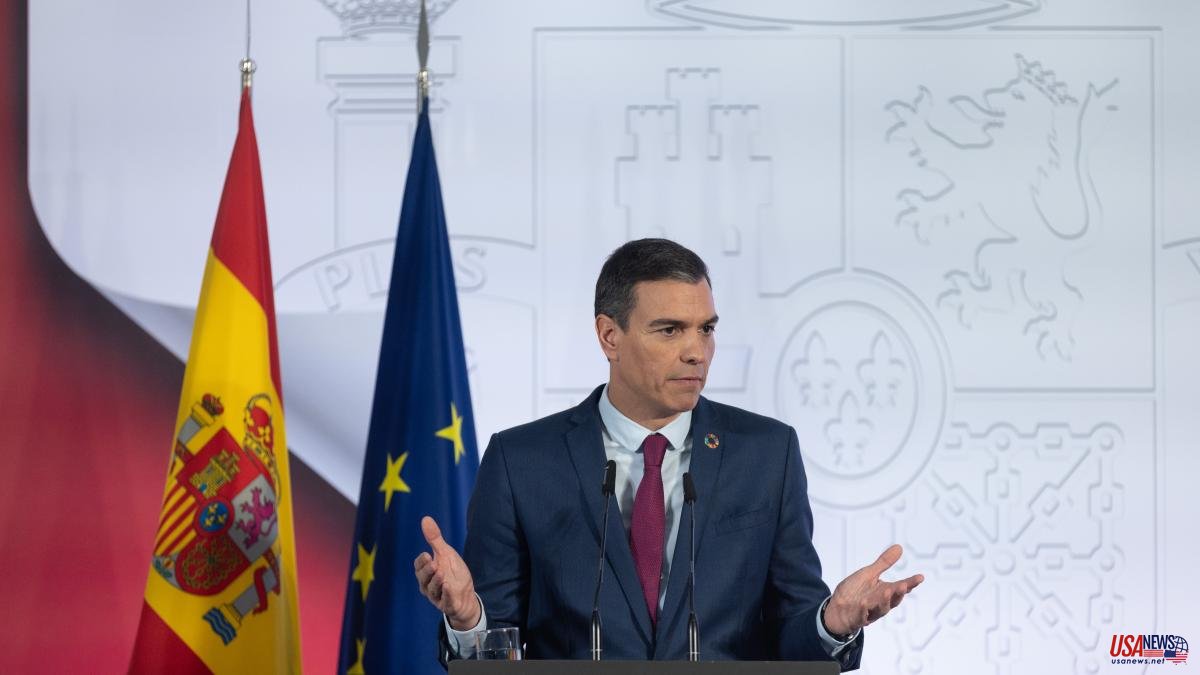 "The independence movement, as a political project, goes against the times," Pedro Sánchez warned in his year-end balance appearance at Moncloa, after the president of the Generalitat, Pere Aragonès, demanded to open the Negotiation to agree to hold a self-determination referendum in Catalonia. "They can claim what they want, but of course it will not happen," the Prime Minister assured in response to Esquerra's demand.

Sánchez has insisted that "the process has ended". But not only does he think so, but this has been recognized by even Jordi Sánchez, former secretary general of Junts and former president of the ANC until 2017, when the coalition government with ERC broke up. And as for the self-determination referendum on which the Republicans are now focusing again, the head of the central executive has indicated that these are "debates of the past."

The leader of the PSOE has underlined the "abysmal differences and distances" between how he himself is facing the resolution of the political conflict in Catalonia and the response that the Executive of Mariano Rajoy offered at the time. "This is a conflict that was not generated yesterday, we have been here for more than a decade, nor are we going to resolve it from one day to the next," Sánchez argued. But after having adopted a series of "risky" decisions for the dejudicialization of the conflict -the pardons to the leaders of the procés, the repeal of the crime of sedition and the reform of the penal types of embezzlement-, he has highlighted that while in Catalonia an illegal referendum was held and a unilateral declaration of independence was proclaimed under the mandate of the former president of the PP, now “the Constitution is fulfilled in Catalonia”.

Sánchez has used the European Union's response to the coronavirus pandemic or the war in Ukraine, "towards a greater integration of sovereignty". “Independence, as a political project, is a project that goes against the times. The times, where they are moving towards, where contemporary societies of the 21st century are going, is not to compartmentalize sovereignty, but to share sovereignty ”, she has argued.

During his balance of accountability, Sánchez has highlighted that the recovery of coexistence in Catalonia was one of the great commitments of his inauguration speech as President of the Government. “In 2017, Spain suffered an attempt to break its constitutional order in Catalonia. It was an enormous irresponsibility of the independence movement that led us to that precipice. But so did the inability of those who, from the Government, did not stop one of the biggest crises in our democratic history in time ”, he denounced. The PSOE, however, supported the Executive of the PP in the application of article 155 of the Constitution in Catalonia, a support that he has regretted that is now conspicuous by its absence on the part of Alberto Núñez Feijóo.

However, Sánchez has assured that "today the Constitution is fulfilled in all the territories of the country, also in Catalonia". While the independence movement, he added, has ceased to be one of the main concerns of Spaniards, as was the case in 2017. "Today the majority of Catalans, like the rest of Spaniards, are committed to coexistence, to living together”, he celebrated.

"I have remained faithful to the commitment to the Constitution", highlighted the Chief Executive. And it has also sued the PP, before the blockade of the Judiciary. "The PSOE has always been within the Constitution, in the opposition and in the Government, but others cannot say the same", he has reproached Feijóo.

Sánchez has guaranteed compliance with the Constitution in Catalonia, and at the same time has defended the reform of the Penal Code already approved to promote the dejudicialization of the political conflict, with the repeal of sedition and the reform of embezzlement. "Political conflicts have to be substantiated in the political territory and not in the courts," she stressed. And he has lamented that both the Spanish right and the Catalan unilateralist independence movement "miss those dark times" of 2017.

The President of the Government has thus once again slammed the door on any debate on the self-determination referendum in Catalonia, and has not committed to an upcoming meeting of the dialogue table with the Generalitat. Sánchez, however, has recognized that "the dialogue table has proven to be a useful tool to convey the reunion agenda." "We listen, and they also have to listen to what is the position of the Government of Spain regarding respect for the Magna Carta, the constitutional order, the unity of Spain, territorial integrity and national sovereignty," he argued.

But he has insisted that the political conflict in Catalonia will not be resolved in one day. “We will need time, patience, determination and generosity, on everyone's part, to find a point of balance that guarantees us the coexistence that we need in Catalonia”, he assured.