Sánchez Llibre: "The minimum wage must rise more but it must be agreed"

Re-elected last July for a new term as president of Foment del Treball, the Catalan employers' association, Josep Sánchez Llibre advocates a great income pact as the only way to overcome the crisis while preserving social cohesion. 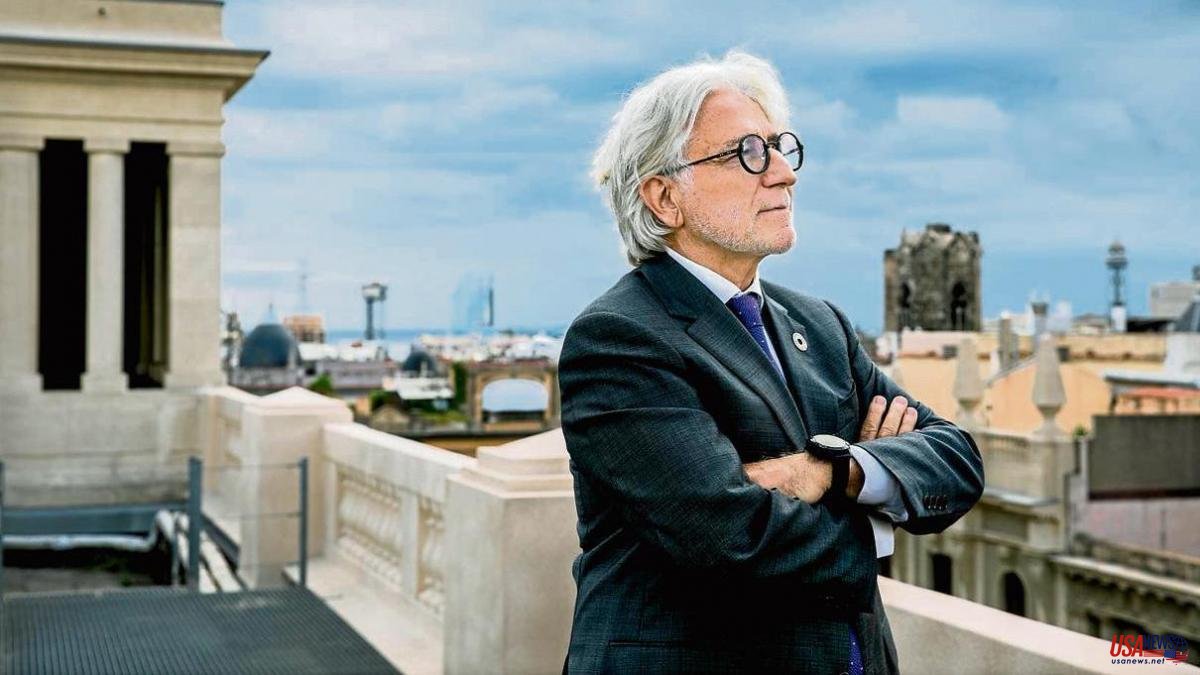 Re-elected last July for a new term as president of Foment del Treball, the Catalan employers' association, Josep Sánchez Llibre advocates a great income pact as the only way to overcome the crisis while preserving social cohesion. He is also in favor of the minimum wage continuing to rise but, he stresses, "the government must agree with employers, it cannot be a unilateral decision."

How do you see the economy?

We are in a time of great uncertainty. Forecasts point to a major economic storm but I want to be optimistic. I understand that it is time to look for exceptional solutions. To preserve social cohesion, avoid great inequalities, the President of the Government must lead an income pact, an agreement between businessmen, unions, civil service, pensioners and parliamentary groups to equitably distribute the costs of this great crisis. We must prevent inflation from becoming chronic and becoming stagflation. We must avoid the suffering and pain of families, the self-employed and SMEs. I urge Pedro Sánchez to have the courage to make that pact possible.

But it seems that neither the President of the Government nor the CEOE itself are very much for the job.

I have defended the income pact within the CEOE, I have discussed it privately with President Garamendi and I have never heard a voice against it. I think all Spanish businessmen would agree.

The unions accuse them of not wanting to negotiate.

That is not true. We have not gotten up from any collective bargaining table, and there are about 5,000 on the march. In Catalonia we continue negotiating where there is still no agreement and we are optimistic. Soon an agreement will be closed in two important agreements, that of the hotel industry and that of offices and offices.

With an inflation of 10%, where would that rent agreement go?

As with the Moncloa Pacts, the agreement of all parties must be sought. And it will be necessary to guarantee that the lowest incomes do not lose out. There should be a transfer of public funds to the most needy classes. The State can afford it: it is benefiting from the increase in tax collection thanks to inflation. From 2020 to July of this year, this increase is more than 20,000 million euros. The State could dispose of another 60,000 million by improving the efficiency of the administrations. And reducing the submerged economy from the current 35% to 10% would earn 35,000 million annually. Another solution that the Government should have already adopted is to deflate personal income tax.

What do you think about the increase in the minimum wage?

It should also enter the pact. But for social sensitivity, it makes no sense that the minimum wage does not continue to rise. Now, the Government should agree on this with the businessmen, it cannot be a unilateral decision. And some exceptions are necessary: ​​the countryside, companies that work with disabled people, young people between 16 and 22 years old without experience, because they can lose their jobs.

How are companies weathering the energy surge?

Catalan companies are having a very hard time, some are considering temporarily stopping and starting to negotiate an ERTE. Tax decisions have been made that no longer have a course, such as lowering VAT. As long as there is no effective European regulation, I see no other solution than to propose direct subsidies from the Government.

Do you agree with the EU proposal to impose taxes on windfall profits from energy companies?

We openly criticized the Spanish government when it raised taxes on banks and energy companies based on their billing. This approach borders on unconstitutionality. What the EU proposes is different, a liability levy on the benefits of energy companies that goes directly to the affected sectors. It is a good way to design a European income pact to spread the crisis. At this point, I want to value the figure of the entrepreneur, because in this crisis some have tried to demonize it. We are not the adversaries or the enemies, but we are part of the solution. And some members of the Government, such as the Minister of Labor, make ideological statements that border on irresponsibility.

Are you worried about the open crisis in the Government of the Generalitat?

At the time we supported the ERC-Junts coalition government because we believe that Catalonia needs stability. And we are worried. Now more than ever the Government should be very cohesive.

What is the government asking for?

To overcome this serious economic situation, both the Govern and the Government must prepare budgets that do not burden the productive economy, in solidarity with the most disadvantaged classes, that do not penalize public investment, and that reward the creation of jobs. And very importantly, the Government should eliminate the wealth tax, which is confiscatory and does not exist in any other country. If it is not done, the Generalitat could reduce it to 90%.

Foment has just set up a commission to unblock the expansion of El Prat airport. How have the administrations received it?

We have been working on the issue for 14 months and we are convinced that throughout the 9 months of work of this commission we will achieve everyone's consensus. Now I ask for caution and let this committee work with 35 experts from all fields. I think that the administrations have welcomed it, in different degrees of intensity, of course, but the truth is that none has positioned itself against it. Before starting it, I have spoken with the Generalitat, with the president and vice president, with Aena, with the Government, with the airport...

And with the Barcelona City Council?

We have spoken with part of the Barcelona City Council, although we will call people from the two parties that govern the city to clarify their position and listen to us. I am convinced that there will be a consensus in June. I see the expansion as compatible with respect for the natural environment.

Another theme entrenched for a long time is that of Rodalies.

From Foment we have reiterated that the infrastructure deficit in Catalonia is worrying, alarming, unsustainable. But now a reconciliation between the State and the Generalitat is possible in this chapter. For this reason, we ask that a comprehensive transfer process be agreed upon as quickly as possible for the services of Rodalies, regional services and Avant. And that this transfer be made to Ferrocarrils de la Generalitat. It should have been done years ago, but in any case now is the time because there is a dialogue table and the Government depends on the support of part of the Government.

Will you support Antonio Garamendi's candidacy in the upcoming CEOE elections?

I must say that running the CEOE is not easy at all. With the covid, after the war and the rise in energy prices, decisions have had to be made that not everyone likes. But from Foment, the most important territorial organization of the CEOE and founding entity, we would like there to be more debate in the future, more participation of the vice-presidents and the organizations in decision-making.

Do you mean that you do not support Garamendi's candidacy?

Officially I still don't know if he will appear, he hasn't told me. What I do know is that Foment will not appear, but we ask for that greater participation in the decisions.

How is the management of European funds working?

There is great frustration because it has not been managed efficiently by the Administration. Many competitions have been abandoned, many SMEs cannot go... It would be good to change the system and have public-private collaboration.