The President of the Government, Pedro Sánchez, justified this Wednesday Spain's commitment to increase its defense spending to 2% of GDP in the need to guarantee security and continue contributing to peace missions such as the UN that he visited this Wednesday in Lebanon. 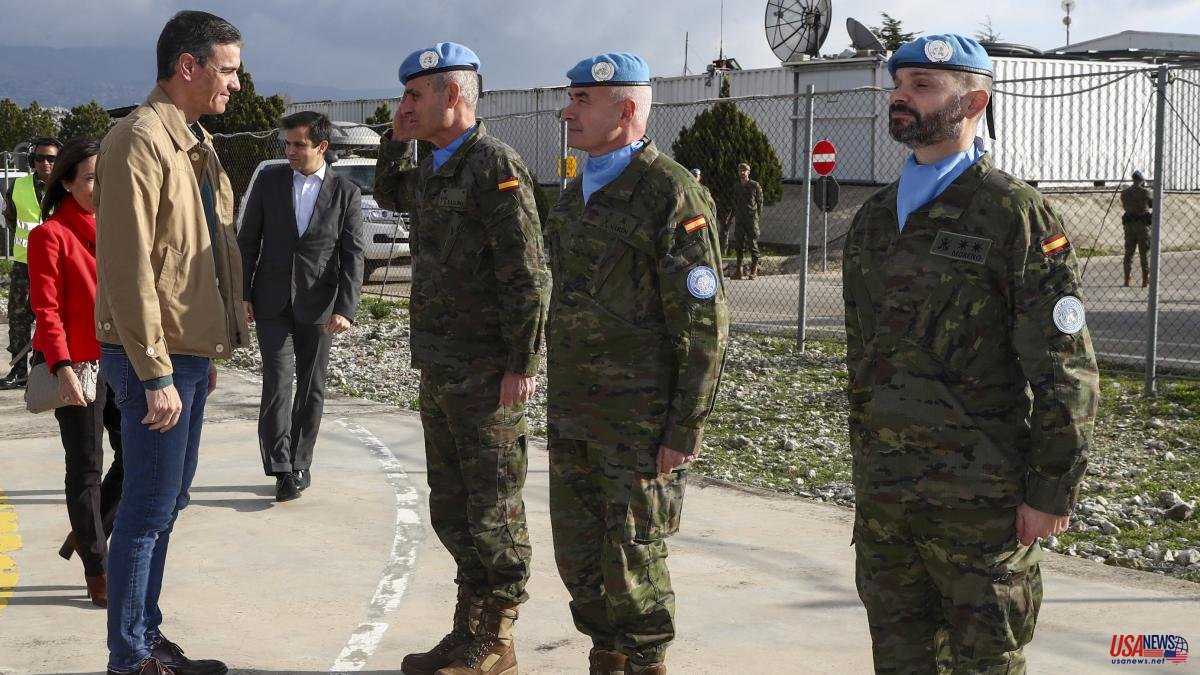 The President of the Government, Pedro Sánchez, justified this Wednesday Spain's commitment to increase its defense spending to 2% of GDP in the need to guarantee security and continue contributing to peace missions such as the UN that he visited this Wednesday in Lebanon.

Sánchez claimed the importance of increasing this expense in his address to the 646 Spanish troops deployed at the Miguel de Cervantes base in the town of Marjayun, to which, accompanied by the Defense Minister, Margarita Robles, he flew by helicopter from Beirut and where the majority of the Spanish contingent is located.

Spain is currently in command of the United Nations mission in Lebanon (FINUL), which, with more than 10,000 troops, has the objective of monitoring the cessation of hostilities between Hezbollah and Israel, accompanying and assisting the Lebanese armed forces in the south of the country and guarantee humanitarian access to civilian populations.

In a few words addressed to the contingent, Sánchez thanked the Armed Forces for their work in favor of peace and international stability. "Spain is strongly committed to the role of the United Nations and the presence of troops here is good proof of that commitment", he assured.

"I have come to Lebanon to convey to you the pride of Spain for the professionalism and generosity with which you carry out your work", he insisted regarding a mission in which Spain has participated since 2006 with the aim of monitoring the cessation of hostilities between Hezbollah and Israel and accompany and assist the Lebanese Armed Forces in the south of the country and along the separation between the two states, the so-called Blue Line.

Sánchez has not ignored the situation generated by the "brutal, illegal and unjustified" war in Ukraine, which he believes has revealed the "importance and fragility" of security. "We have become aware of the extent to which our Armed Forces help guarantee the security of Spain and make the prosperity of our compatriots possible", he acknowledged.

In this context, he recalled, last June he announced the commitment for Spain to reach 2 percent of GDP in investment in defense. This "remarkable effort" has explained that it will contribute to modernize and improve the capabilities of the Armed Forces and also "continue making them a reference at a European and world level".

That of Lebanon is the largest Spanish contingent deployed abroad, with 21 percent of the 3,000 soldiers participating in some international operation. Sánchez has highlighted his work over the last 16 years as "an example of professionalism, operability and commitment".

With their work, he stressed, the Spanish military contributes to providing "well-being" to Lebanese society, to "saving lives" and to giving a horizon of expectations of peace to the new generations of the country.

For all these reasons, he has encouraged them to move forward "with a firm step and efficiency", with a memory for the 16 Spanish soldiers who have lost their lives in the country since the beginning of the mission, as well as for the Irish soldier who died in a attack carried out this month against a United Nations convoy. "I convey the love and admiration of all of Spain to you and ask you to take great care of yourselves to return home with the satisfaction and pride of having fulfilled your duty", concluded the president wishing the contingent a happy and prosperous 2023.