The President of the Government, Pedro Sánchez, landed in Belgrade after 5:30 p. 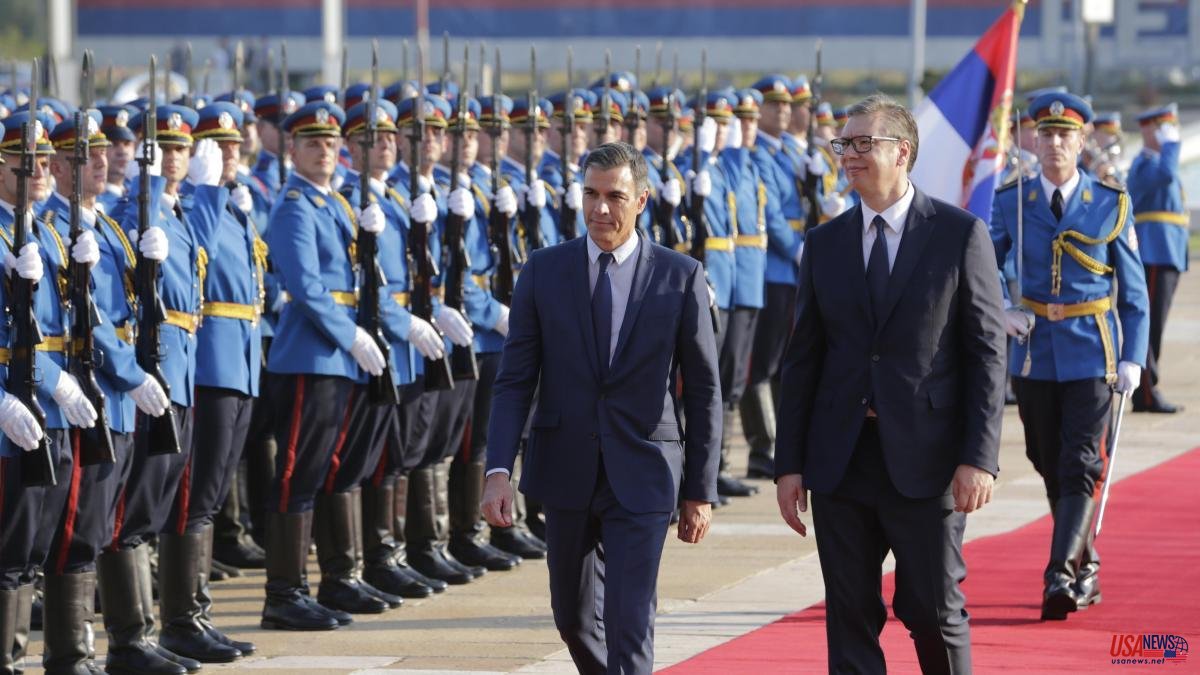 The President of the Government, Pedro Sánchez, landed in Belgrade after 5:30 p.m. as the first stop on his tour of the Western Balkans. A trip framed in the strengthening of bilateral relations and personal support for the respective EU accession processes of Serbia, Bosnia and Herzegovina, Montenegro, North Macedonia and Albania.

The Serbian Head of State, Aleksandar Vucic, received Sánchez at the Palata Srbije where the two held a bilateral meeting for 65 minutes.

Vucic, who visited Spain on an official trip last February, stressed that Serbia sees Spain as "a sincere friend" with whom he has managed to "improve trade cooperation" to the point of working on holding a business forum in the autumn that brings together entrepreneurs from both countries. "You are our sincere friends", "I doubt that in any European country they are going to accept you" like the Serbs to the Spanish, he has underlined on two occasions.

Among the main agreements are investments in energy matters such as After addressing the cooperation between Spain and Serbia in economic matters, both leaders will chair an official dinner of the two delegations as a sign of the good relations that exist.

Sánchez reciprocated the words of thanks and the hospitality received in Serbia, highlighting "the values ​​that unite both countries despite their geographical distance". To the point of qualifying as "excellent" the existing relations between the two countries.

With the focus on the war in Ukraine, Sánchez highlighted the impoverishment that the conflict is causing to European society and called for cooperation to maintain food corridors and thus avoid possible famine caused by the shortage of cereals.

"The war has opened up a reflection on what Europe is and who we Europeans are. And it is good that the debate on enlargement to several countries in Eastern Europe and the Western Balkans has been revived", Sánchez continued. The President of the Executive understands that "countries like Serbia -a candidate since 2012- must form part of the European Union to continue strengthening their values ​​of security and well-being". Serbia will have the support to become a full member as it advances in the reforms demanded by the European Parliament.

Regarding Kosovo, Sánchez has insisted that "Spain will not stop calling for dialogue, but is committed to respecting the territorial integrity of nations" and for this reason he has endorsed his position of "total support for Serbia" in the open conflict with pristine.

The President of the Government will go to Sarajevo and Mostar (Bosnia Herzegovina) tomorrow where, in addition to promoting several cooperation investment projects, he will pay tribute to the 23 Spanish soldiers who died in Bosnian territory during the Balkan War in which the different detachments deployed nearly 45,000 soldiers since 1992.

Already on Sunday, the next stops will be Podgorica (Montenegro), Skopje (North Macedonia) and Tirana (Albania), from where on Monday he will end the tour to return to Madrid and hold the Council of Ministers in which he will approve a plan urgently to save energy and reduce electricity bills.