Pedro Sánchez has wanted to start the parliamentary course, according to his Moncloa and Ferraz strategists, "greasing the machinery and putting the batteries" to the socialist deputies, senators and MEPs, whom he has gathered this Monday in Congress before a final straight of the legislature in which he wants to stand up to the idea of ​​changing the political cycle in Spain that Alberto Núñez Feijóo encourages at the head of the Popular Party. 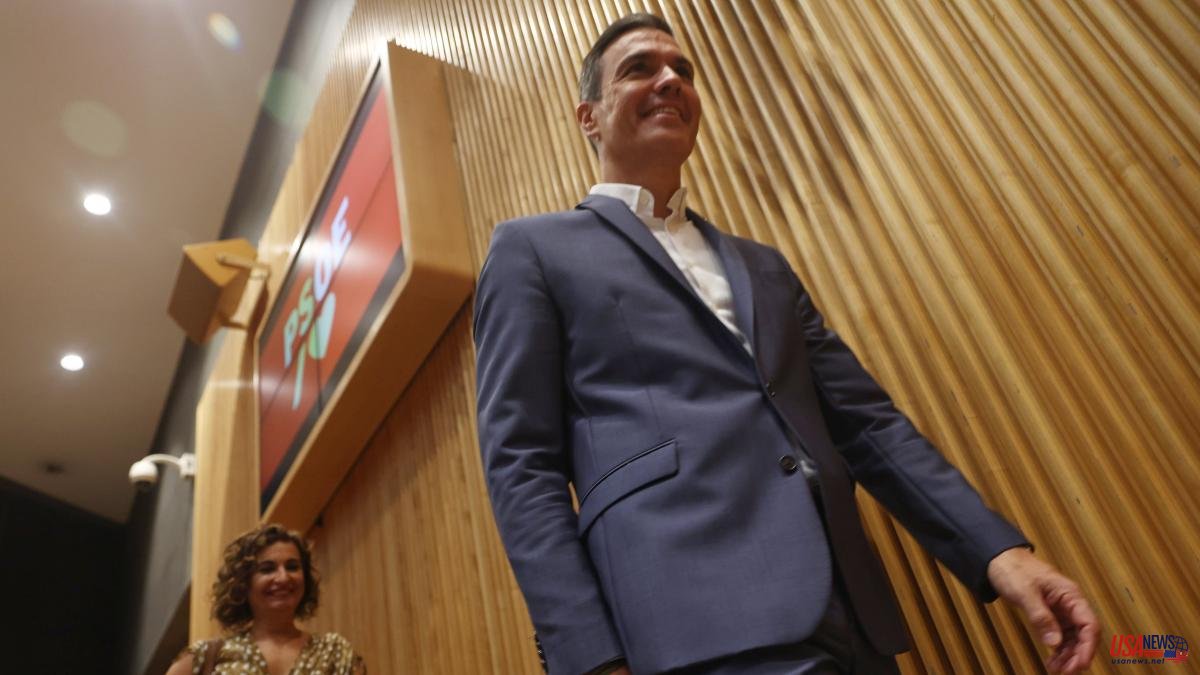 Pedro Sánchez has wanted to start the parliamentary course, according to his Moncloa and Ferraz strategists, "greasing the machinery and putting the batteries" to the socialist deputies, senators and MEPs, whom he has gathered this Monday in Congress before a final straight of the legislature in which he wants to stand up to the idea of ​​changing the political cycle in Spain that Alberto Núñez Feijóo encourages at the head of the Popular Party. And he has done it with a speech "with a lot of political and ideological charge", as highlighted, in which he has confronted his "revolutionary and transformative" laws with the "reactionary ideology" that he has attributed to the right.

After Feijóo announced this morning that if he arrives at Moncloa he will repeal all the laws of the progressive coalition government that the PP has appealed to the Constitutional Court, Sánchez warned: "It costs a lot to win rights and freedoms, and they lose a lot fast when it depends on the right”. Something that has ensured that not only occurs in Spain, but also in the United States, for example, in the face of abortion legislation. The leader of the PSOE has warned that, in the remainder of the legislature, he is going to "remain committed to advancing in rights and freedoms."

The repeal project announced by Feijóo, Sánchez has warned, explains the PP's "blockade" of the renewal of the General Council of the Judiciary and the replacement of the magistrates in the Constitutional Court, which he has considered "is very serious and very dangerous , as well as undemocratic”. “Politics is not neutral. To say that one is going to repeal conquests and social advances that are appealed before the Constitutional Court is ideology. And it is the worst of ideologies, the reactionary one”, Sánchez denounced.

“We are the government of the people”, the leader of the PSOE has insisted, to argue his government policies in defense of the interests of “a majority of the middle and working class”, which according to Moncloa includes 95% of Spaniards, compared to to a PP that, in his opinion, only "defends the interests of a minority, however powerful it may be." Tomorrow it will be in evidence, he warned, when the PP votes in Congress against the new taxes on the extraordinary profits of the big banks and energy corporations.

Sánchez has also directly challenged Feijóo, after the first major debate in the Senate that both starred in last Tuesday. The President of the Government has assured that he is determined to continue confronting face to face with the leader of the main opposition party, because for the Socialists it is the best way to puncture the balloon of the "Feijóo effect" that continues to lead all the polls. "I have already announced that there will be more debates, given the result of last week's debate," warned Sánchez, to great applause from the Socialist parliamentarians.

The leader of the PSOE has insisted on defending his management of the coronavirus pandemic and now of the war in Ukraine, with its serious consequences of the energy crisis and the increase in inflation. And he has assured that he will continue to lead "solid majorities" to approve his legislative action in the Cortes, which will give "depth" to the legislature and "stability" to the Executive of the coalition between the PSOE and United We Can. Sánchez has warned that he is now preparing to seek the approval of his third consecutive general state budgets. “We have done a lot, but we still have a lot to do”, he pointed out to the Socialist parliamentarians. And he has criticized that he will not be able to count on the support of a right wing that has assured that it is "a prisoner of its own past", and has denounced the PP "it is trapped by a legacy of ashes", with a "neoliberal" response ” to the financial crisis of a decade ago that he has summarized in “unemployment, inequality, corruption and dismantling of the welfare state”.