Sánchez challenges Feijóo to another debate to stage his "ideological battle" 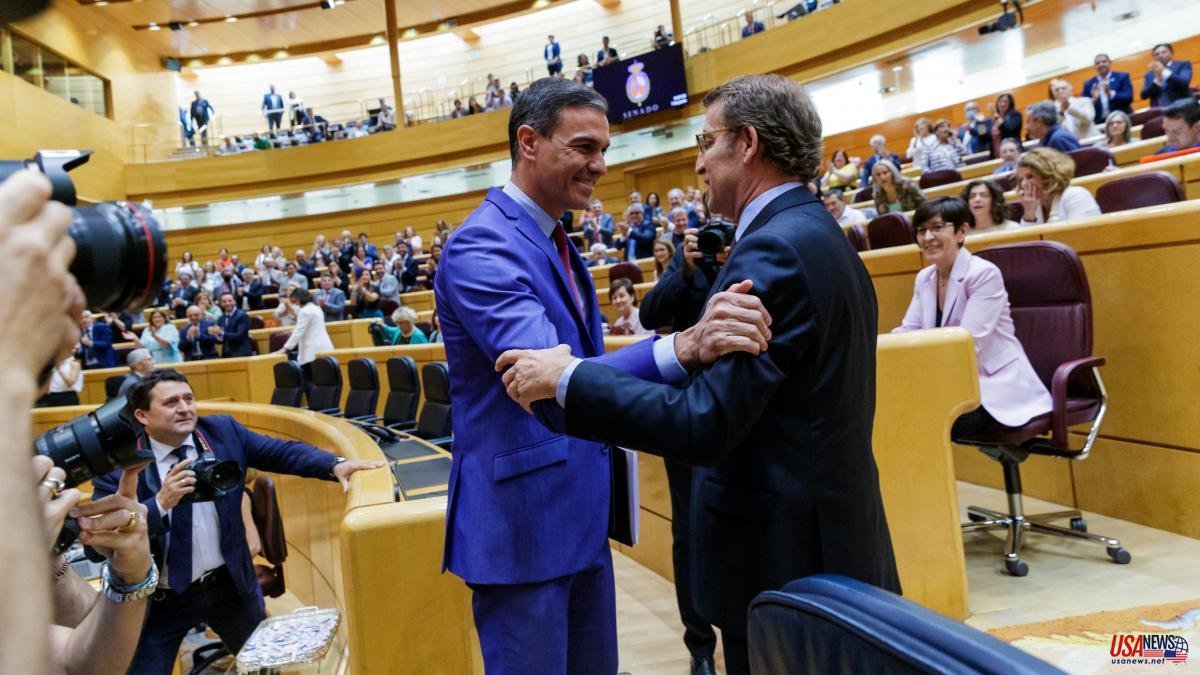 "Here we go". In Moncloa they already saw the third budgets of Pedro Sánchez's mandate on track when the PSOE and United We Can sealed last week, and not without jerks, the fiscal agreement. Once the income chapter had been agreed – with the new “solidarity tax” on large fortunes – only expenses remained to be balanced. And despite the fact that the internal pulse in the coalition added more long blank nights for the negotiating teams, and renewed tears, early yesterday there was white smoke.

“A new agreement, for a better country”, celebrated Pedro Sánchez, thus exhibiting the stability of his mandate in the midst of a permanent storm. "For the third time in a row, we approved general state budgets to protect the middle and working classes, advance social justice and guarantee the economic prosperity of Spain," the president stressed. The framework of the “ideological battle”, as the socialists call it, is thus set for his immediate confrontation with the leader of the Popular Party, Alberto Núñez Feijóo.

After the hectic last hours of negotiation, Sánchez and Vice President Yolanda Díaz staged the new budget agreement with a placid sofa scene, which was then approved by the Council of Ministers for submission to the Cortes. The third consecutive budget project, despite the tension and polarization of the political scene, in the midst of a new energy and inflationary crisis, which outlines horizons of uncertainty.

The pulse in the government coalition between the PSOE and United We Can - to which the dissensions between the purple formation and Yolanda Díaz are added - is maintained before spending on Defense or to agree on legislation on housing, families, the transsexual group or security citizen. And the investiture bloc is already waiting with nails for the imminent parliamentary negotiation: “The Esquerra vote is sweating!” warned Gabriel Rufián. Meanwhile, the PP roars against Sánchez's alliances: "Prisoners for budgets!" Cuca Gamarra cried out, before the negotiation with EH Bildu. But the Minister of Finance, the socialist María Jesús Montero, was already convinced that the accounts will obtain the support of the investiture block and, as on the two previous occasions, they will be approved by a large majority "in due time and form", to to come into force on January 1. "The negotiation begins!" Montero replied to Rufián's notice.

Despite the exhaustion that the Executive accumulates in the face of the succession of crises that have occurred –“all governments suffer”, they assume in Moncloa, just taking a look at the European panorama–, and in the face of the uncertain new electoral cycle, Sánchez is guaranteed in any case with these new accounts –the last of the legislature– that will be able to exhaust its mandate, as it intends, in December 2023. “In the face of doomsayers and catastrophists, in the face of noise and shrillness, stability, security and protection”, celebrated yesterday the Government spokesperson, Isabel Rodríguez.

And, again, Sánchez will go on the offensive. "The more people know him, the more intention to vote he loses in the polls," they warn in Moncloa about Feijóo. And, in his strategy of trying to "unmask" the leader of the PP, Sánchez himself already warned that he would go back to look for the melee with Feijóo after the first in-depth parliamentary clash that both held in the Senate, on September 6 . "There will be more debates, given the result," Sánchez celebrated after that session in which he accused Feijóo of "insolvency and bad faith."

Said and done: the Government already requested yesterday the appearance of the president both before the plenary session of Congress and the Senate, to account for its new economic, fiscal and social measures. "It is an unprecedented event, which had never occurred," said Isabel Rodríguez about Sánchez's appearance in both chambers consecutively. The appointment in Congress will be on Thursday of next week, on October 13, and just five days later the new duel between Sánchez and Feijóo will take place in the Senate, on October 18.

The appearance in Congress is justified by the explanations that Sánchez must convey about the result of the informal European summit to be held this Friday in Prague, while the appointment in the Senate – which is where Feijóo has his seat – has as its main direct confrontation without intermediaries between the President of the Government and the leader of the PP.

And to contrast two antagonistic political, social and fiscal models, in what the PSOE spokesman in Congress, Patxi López, warned that it is "a radically ideological battle."