If the relationship between the central government and the Catalan government was condensed five years ago with the image of a train crash, now it is about driving the dialogue convoy as far as possible, bearing in mind that the route runs through a section of curves pronounced as of November due to the proximity of the municipal elections. 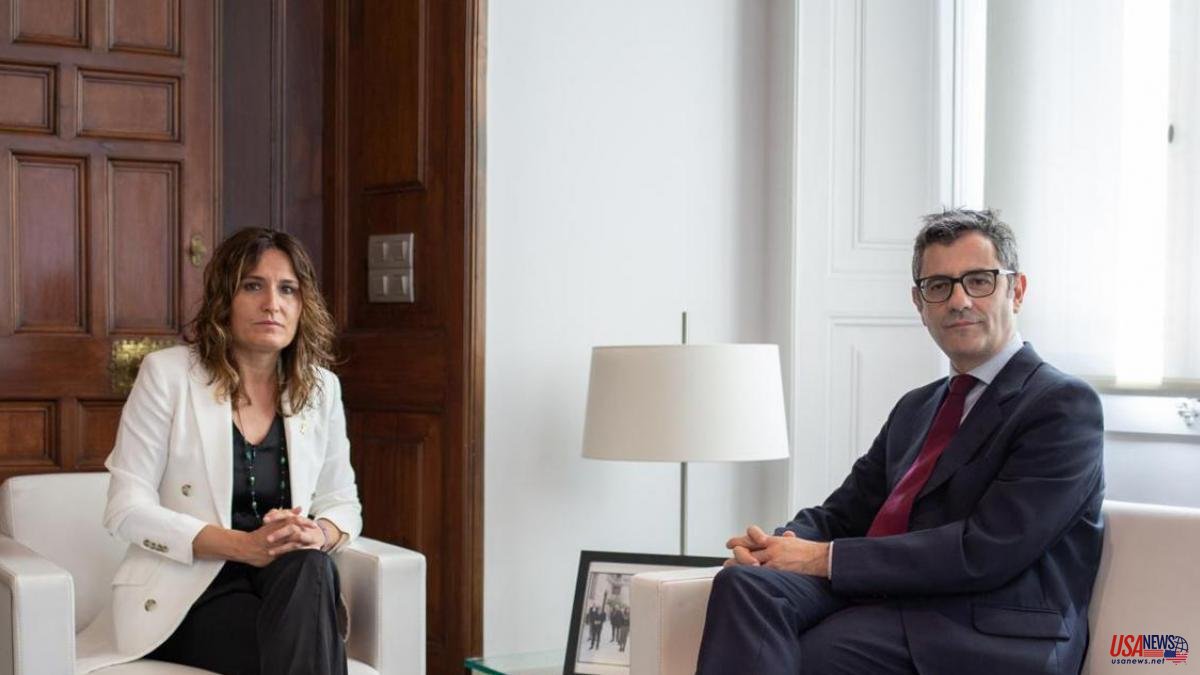 If the relationship between the central government and the Catalan government was condensed five years ago with the image of a train crash, now it is about driving the dialogue convoy as far as possible, bearing in mind that the route runs through a section of curves pronounced as of November due to the proximity of the municipal elections. Pedro Sánchez and Oriol Junqueras try to chart the course. The PSOE needs to carry out the latest budgets of the legislature and ERC needs the central government to launch legal initiatives next fall that mitigate the judicial effects of the procés, which can still send dozens of people to jail.

That is the meaning of the "dejudicialization" to which the two governments committed themselves on Friday and which was reflected in a document made public after the meeting between Minister Félix Bolaños and Minister Laura Vilagrà. The Government emphasizes that it is the first time that the central Executive commits in writing to "contribute to the end of the judicialization of the political conflict." But, what does that consist of? How is it applied? For ERC, it is about finding formulas that prevent several leaders who are about to sit in the dock for actions carried out during the procés from ending up in prison.

The priority of ERC and, specifically, of Junqueras, who is the one who really pilots the negotiation strategy with the Government of Sánchez, is to find a way out for those defendants, and they have sent it to Moncloa through different channels. Esquerra has demanded that the Executive use its influence in the State Attorney's Office, in the Prosecutor's Office and face legislative changes. But in Moncloa they hope that the Republicans formulate some more concrete proposal.

Even if Sánchez agrees to explore this path, it will not be easy. In most cases, those affected are accused of embezzlement and disobedience. They are still waiting for the Prosecutor's Office to present their indictment. If the Government manages that the public ministry does not include embezzlement, for example, which carries prison sentences, everything would be simpler. But until now the Executive has not been able to forcefully influence the Prosecutor's Office in cases related to the procés, as was seen during the trial of the independence leaders, in which the prosecutors maintained a very hard position.

If the Prosecutor's Office, therefore, maintains accusations such as embezzlement, the other way would be to modify the Penal Code to mitigate the penalties in cases in which the alleged effective diversion of public money was not consummated, even if it was planned. However, any reform of this crime raises suspicions, since almost everything known as corruption is punished under the cloak of embezzlement. For the Sánchez government it would be difficult to justify before public opinion.

The other legal front is the reduction of penalties for sedition, an initiative that the president already contemplated in his day, but then ERC was not interested and now it could be rescued. Former Minister of Justice Juan Carlos Campo drew up a complete reform of sedition to adapt his sentences to those in force in other European countries and reduce them by almost half. Now they go from 8 to 15 years in prison. Sánchez was about to approve it at the same time that he granted the pardons, but finally he left it in a drawer. If it recovers as Campo thought, the idea is to reduce the sedition but incorporate an aggravated disobedience that carries low prison sentences in some cases (now it only involves a fine and disqualification).

At the moment, ERC has not transferred specific proposals to the Government and hopes that it will be the latter that takes the initiative to "dejudicialize". The idea of ​​the Republicans is that in the fall a commitment could be made public in this regard and work would begin on legal reforms. In this context, ERC could announce its support for the State Budget for 2023, accounts that Sánchez considers essential. First, because they allow the message to be sent that his government, despite the noise caused by the disagreements between the partners, is not paralyzed and is stronger than what the PP proclaims. And second, because the current accounts, if they were to be extended, do not correspond to a new scenario of runaway inflation and the risk of recession that is in sight for the coming months if the war in Ukraine continues.

ERC also needs these movements to take place in the second half of the year to keep the dialogue table standing, since from November politics will focus on the municipal elections of May 2023. The Republicans intend that these elections be a definitive turning point in their struggle with Junts and that allows them to win the jackpot, the mayor's office in Barcelona. For ERC, running for these elections with his rivals in the pro-independence camp insisting that his support for Sánchez is "for nothing" is not an option. Although the dialogue table was essential to obtain pardons, ERC did not want to mix both things in public, so now the results of that forum appear meager. Autumn is going to be critical for the viability of collaboration between the PSOE and ERC.

The incorporation of Junts to the table before the municipal elections is unlikely. Minister Bolaños made it clear on Friday that the dialogue is between governments, so Junts will not be able to join unless they agree to their representatives being ministers. Although the truth is that the substantive negotiations with Moncloa have been conducted discreetly by people trusted by Junqueras who do not belong to the Government. It is the ERC leader who sets the strategy for the relationship with Sánchez and it will be he who decides how far it goes.