Six people were killed in a shooting incident at an Illinois parade.

Officials said six people were killed and more than twenty-one were injured when a gunman opened fired at the Highland Park Fourth of July parade. 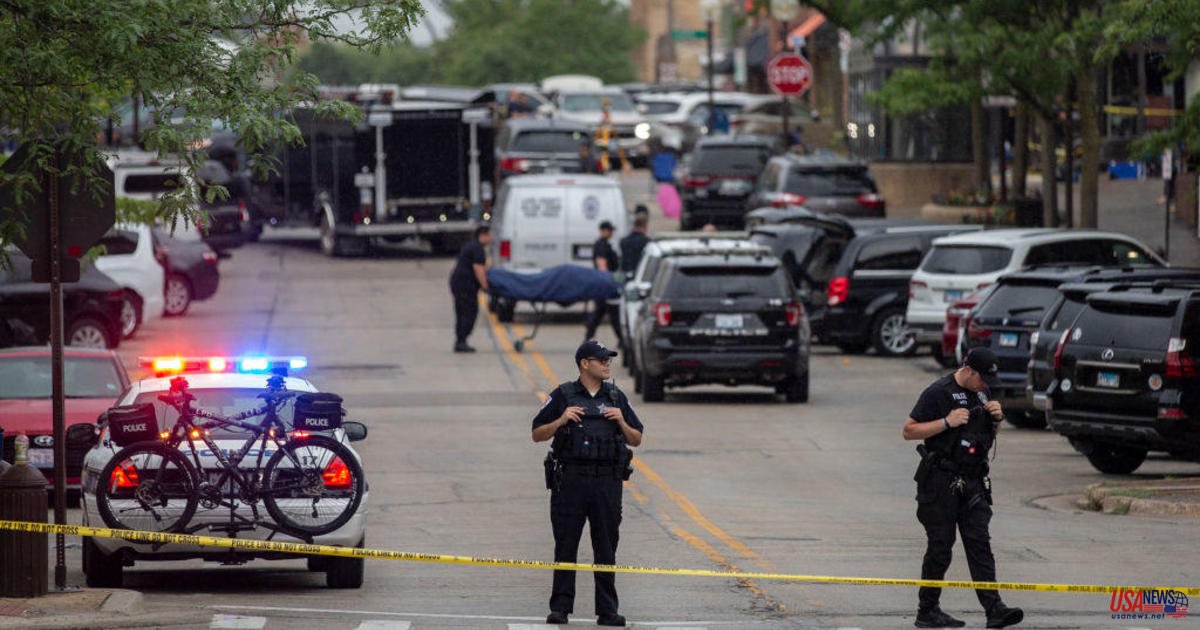 Officials said six people were killed and more than twenty-one were injured when a gunman opened fired at the Highland Park Fourth of July parade. According to Joe Schrage, Chief of Highland Park Fire Department, some victims, including a child, were in critical condition at the time they were taken from the scene.

Robert Crimo III was taken into custody around 6:30 p.m., almost nine hours after the shooting. After a short pursuit, officials said that his vehicle was spotted by police and he was eventually stopped. As the investigation continues, they said that he would be taken into custody to Highland Park Police Department.

Witnesses and police earlier in the day claimed that the gunman shot at the crowd from a roof near the parade route.

Investigators claimed that a firearm was recovered from the scene. Covelli described it as a "high-powered rifle."

Covelli stated that it sounds like spectators were targeted.

CBS Chicago reports that police officers with guns were seen at Crimo's home in Highwood just north of Highland Park hours after the shooting. CBS Chicago was told by neighbors that Crimo lives in the house with his uncle and father.

Throughout the evening, FBI agents were seen entering and exiting the house.

Jennifer Banek, Lake County Coroner, told reporters that five people died on the spot of the shooting. Banek stated that the sixth victim was taken to a hospital and that she did not have any details.

Dr. Brigham Temple was the Highland Park Hospital's medical director for emergency preparedness. He said 26 patients were brought to the hospital, 25 of which had been shot. Four patients were transported to Glenbrook Hospital while four others were transferred to Evanston Hospital. Several other patients were also taken to hospitals not part of the Northshore Medical System network.

Temple stated that the ages of the patients ranged between 8 and 85 years. He also said that he believed four to five patients were children.

Around 10:14 AM, more than 100 law enforcement officers from several agencies responded to the shooting in the suburb north Chicago.

According to Pat Milton, senior CBS News investigative producer Pat Milton, investigators are looking through surveillance cameras for any information about the shooting. They also examine cellphone videos of parade-goers.

In the wake of the shooting, police and ambulances from many jurisdictions stormed the scene. The scene captured people being taken to ambulances.

Elyssa Kaufman (CBS Chicago digital producer), was at the parade with her family when she heard gunshots.

Kaufman stated, "Everyone was running, hiding, and screaming." It was terrifying. It was extremely scary. We were very lucky to get out quickly.

CBS Chicago witnesses said that there was confusion at first over whether loud bangs were part Independence Day celebrations.

A woman from Chicago told CBS Chicago that she saw people running, ducking, and screaming. "I ran with my little girl and ran into a small store. But I was afraid because I didn’t know if they were coming or if they were in the building.

Lynn Sweet, Chicago Sun-Times columnist, posted a video to Twitter showing a band performing on a truck during the parade while a crowd ran the other direction.

My video. My video. pic.twitter.com/DSe0NJOuem

Sweet said that the shooting took place near the reviewing station for the parade.

She said, "I saw things people shouldn't be able to see." "I saw corpses. "I saw people who were injured. I saw pools full of blood."

She estimates that hundreds of people lined up along the parade route in numbers between two and three people deep. She stated that it was obvious that people were leaving in a hurry.

She said, "You saw baby carriages. They're still there on the scene... there are water bottles." "It's just an instant frozen in time when people didn't care much about their belongings because they wanted out of there."

Nancy Rotering, Highland Park Mayor, stated that the remainder of the festival was canceled and that several other nearby communities had also cancelled their parades.

Rotering stated that "on a day when we came together to celebrate freedom and community, we are instead grieving the loss, tragic loss of life, and struggling with terror that was brought upon," at a press conference following the shooting.

In a statement, President Biden stated that he and Jill Biden were shocked by the senseless gun violence that had once again caused grief in an American community. We are thankful for all the first responders, law enforcement and police officers who responded to the situation. I spoke with Governor Pritzker, Mayor Rotering and offered my full support to their communities.

Biden later said, speaking on the White House's South Lawn, that "you all heard what happened today." Every day reminds us that democracy is not perfect. There is no guarantee about our way to live. It is up to us to defend and fight for it. We must also vote to get it.

Governor JB Pritzker asked Illinoisans to pray for victims and their families as well as first responders. "But, grief won't bring back the victims and prayers alone won't put an end to the terror of rampant firearm violence in our country. He said that he would stand with Americans and Illinoisans to end the violence.

Pritzker stated, at a Monday evening press conference: "I want today to honor the heroism of law enforcement who ran towards the gunshots they heard today." Particularly, lives were saved by the Highland Park Police Department's brave protection and service of their community.

Pritzker stated that there are no words to describe the evil that appears at a public celebration for freedom, hides on top of a roof, and shoots innocent people using an assault rifle." Pritzker called for increased gun control.

He said that mass shootings had become a weekly American tradition. There will be those who claim that today is not the right day or that the time is not right to discuss guns. I can assure you that there is no better moment or better time than right now. ... Our founders had muskets and not assault weapons. I doubt that any of them would have claimed that an assault weapon with high capacity magazines is a constitutional right, or that it was more important than the rights of those who attended the parade today to live.

At the same press conference Senator Tammy Duckworth reiterated Pritzker’s call for gun control legislation. She praised the bipartisan gun control bill that was signed into law last month, but said, "Today, we have seen, that we can’t just stop here."

She stated, "We must get rid of high-capacity magazines and assault weapons,"

"I just listened the gunfire from one of those videos, and let's tell you, the last time I heard such a powerful weapon firing so quickly on the Fourth of July was in Iraq. Duckworth, who was injured in combat in 2004, said that it wasn't the United States of America. "We can, should, and will do better," Duckworth said.

"Today was a memorable day that we will cherish for a lifetime. It was the best part of America with the men and women I just mentioned. Durbin stated that it was the worst thing about America when a man took a rifle (a high-velocity rifle) and turned it against innocent people. He also destroyed many lives and ruined many families.

Durbin also demanded that gun control laws be expanded, including limits on assault weapons as well as high-capacity magazines.

According to the statement, counseling professionals will be available Tuesday at Highland Park High School to "students and staff" as well as community members.