Sevilla beat Getafe 2-1 thanks to goals from Argentine Marcos Acuña and Rafa Mir, almost at the end of the first and second half, and came out of relegation with their first win at their stadium in the League against a direct rival for the permanence, who never gave up and who lacked accuracy despite the fact that Borja Mayoral closed the gap 3 minutes from the end. 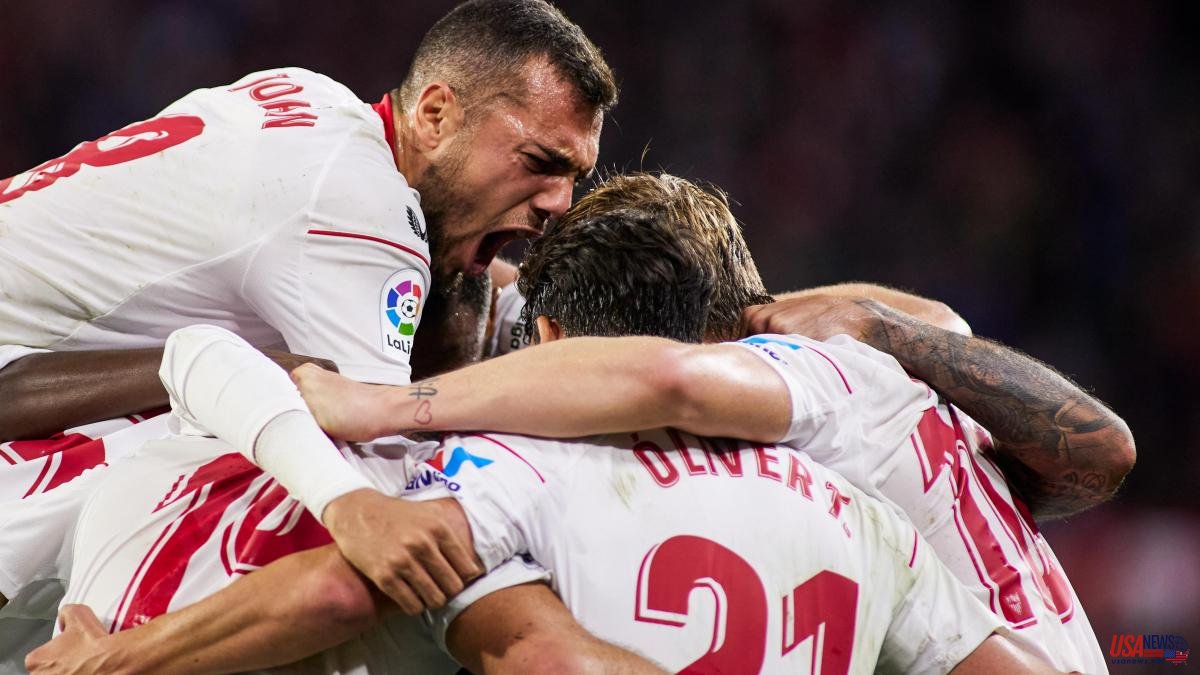 Sevilla beat Getafe 2-1 thanks to goals from Argentine Marcos Acuña and Rafa Mir, almost at the end of the first and second half, and came out of relegation with their first win at their stadium in the League against a direct rival for the permanence, who never gave up and who lacked accuracy despite the fact that Borja Mayoral closed the gap 3 minutes from the end.

Sevilla, who had not won for six games and had not done so at home in the League for 7 and a half months, when they beat Athletic (1-0) on May 22 at the end of last season, took the lead on minute 36 through Acuña, heading in a free kick taken by Rakitic, and although Getafe was able to tie after the break on two occasions by Mayoral and another by Juan Iglesias, in a shot saved by Bono, Mir increased the local lead in the 80th minute before that Mayoral made it 2-1 in 87.

In a surprising direct duel to get out of relegation in the case of Sevilla, an armed team to fight again for the 'Champions', and to get away from that 'hot' zone in Getafe's, of needs and urgency for both teams , the local coach, the Argentine Jorge Sampaoli, could only count on 16 professionals, having six injured and two sanctioned: his compatriot Montiel and the youth player Carmona.

He recovered the French defender Tanguy Nianzou and the Croatian midfielder Ivan Rakitic, after serving their penalties in the 1-1 win in Vigo, and lined up the Moroccan goalkeeper Yassine Bono, the winger Jesús Navas and the Brazilian Fernando Reges as novelties, alternating the position of central and midfielder with the Serbian Gudelj, compared to the team that thrashed Linares 0-5 in the Cup.

At Getafe, with the Turkish Enes Ünal and Borja Mayoral -mustache-scoring player in the last league win against Mallorca (2-0) with whom the azulones broke a run of one draw and two losses- at the top, Quique Sánchez Flores made four changes with respect to the eleven that fell in the Cup against Levante. The goalkeeper David Soria, the Uruguayan winger Damián Suárez, the Paraguayan center back Omar Alderete and Mayoral returned, for Casilla, Portu, the Uruguayan Gastón Álvarez and the former Sevillista Munir.

Sampaoli's team came out with intensity and rhythm, overcame their fears and anxiety that their delicate situation on the table could generate and, very secure at the back and with solidity and concentration in all their lines, soon took control of the game, with the full-backs Jesús Navas and Acuña very active, as well as the also Argentine Erik Lamela in the attacking midfielder, and the Moroccan Youssef En-Nesyri as a stiletto.

It was difficult for him, however, to generate chances against the good defensive network of the Getafense team, always attentive to stealing a ball to put together quick attacks. The first came from a corner taken by Lamela that Joan Jordán headed off a post, just after the first quarter of an hour, but Sevilla lacked more fluidity and conviction up front.

Sevilla dominated, but with little depth, although, after a warning with a good cross from Navas that no one finished off halfway through this period, they found the goal in a strategic play 9 minutes from the break when Rakitic, in a free kick from the left, sent a poisoned ball into the area and Acuña, with his back to the goal, headed it into the back of the net to make it 1-0.

This spurred Getafe, who, with Enes Ünal as the most dangerous man, reacted after the blow received. The Turk starred in the two most relevant actions of the azulones, but without any success, because in minute 41, after a rebound inside the area, a goal was disallowed due to an offside confirmed by the VAR and three minutes he had no aim in a head butt

At the restart, Quique's team took a step forward, ready to seek an equalizer, but ran into a very serious Sevilla defence, led by the trio made up of Nianzou, Fernando and Gudelj, who cleared all of Getafense's offensive attempts, almost always from the ascents of his sides or the combinations with Aleñá and Milla.

Although the Andalusian team, in which their last addition made their debut, the French center-back Löic Badé, who came on for En-Nesyri in the 68th minute in a defensive overtones substitution, controlled well and wanted to play the game long to preserve their lead, little Little by little, Getafe stretched, prevailed over the Sevillistas in average and was very close to equalizing.

However, Borja Mayoral, on two occasions, did not hit the mark and finished off into the side of the net on both occasions, in the last one after a loss by Jordán and a bad transfer of a header from Nianzou to Bono, in minutes 62 and 66, while the full-back Juan Iglesias, twelve from the end, tried with a powerful shot inside the area, but the Moroccan goalkeeper saved the tie with a great intervention, by rejecting the corner with his fingertips.

The Madrid team, with offensive changes by introducing Portu, Munir and Juanmi Latasa, continued to press, but without success, in addition to the fact that in their offense they also left spaces behind that Sevilla took advantage of to extend their lead with Rafa's 2-0 Mir ten minutes from time, with an impeccable header close to the post after a great cross from Óliver Torres.

The azulones gave one last rush and Borja Mayoral made it 2-1 after 87 minutes, by heading a good service from Portu after a great incursion from the right, but the reaction of the visiting team and he lacked time against a Sevilla that tied with force victory.

Incidents: Match of the sixteenth day of LaLiga Santander, played at the Ramón Sánchez-Pizjuán in front of 35,389 spectators. The three world champions from Sevilla with Argentina took the honor kick off: Gonzalo Montiel, Marcos Acuña and Alejandro 'Papu' Gómez.