Second night of protests in Cuba: the chaos that Ian left on the island fuels social discontent

The chaos left in Cuba by Hurricane Ian, from the collapse of the electrical system to problems in the water supply and telecommunications, is fueling latent discontent after two years of economic crisis and fueling protests in the streets of Havana this Friday. 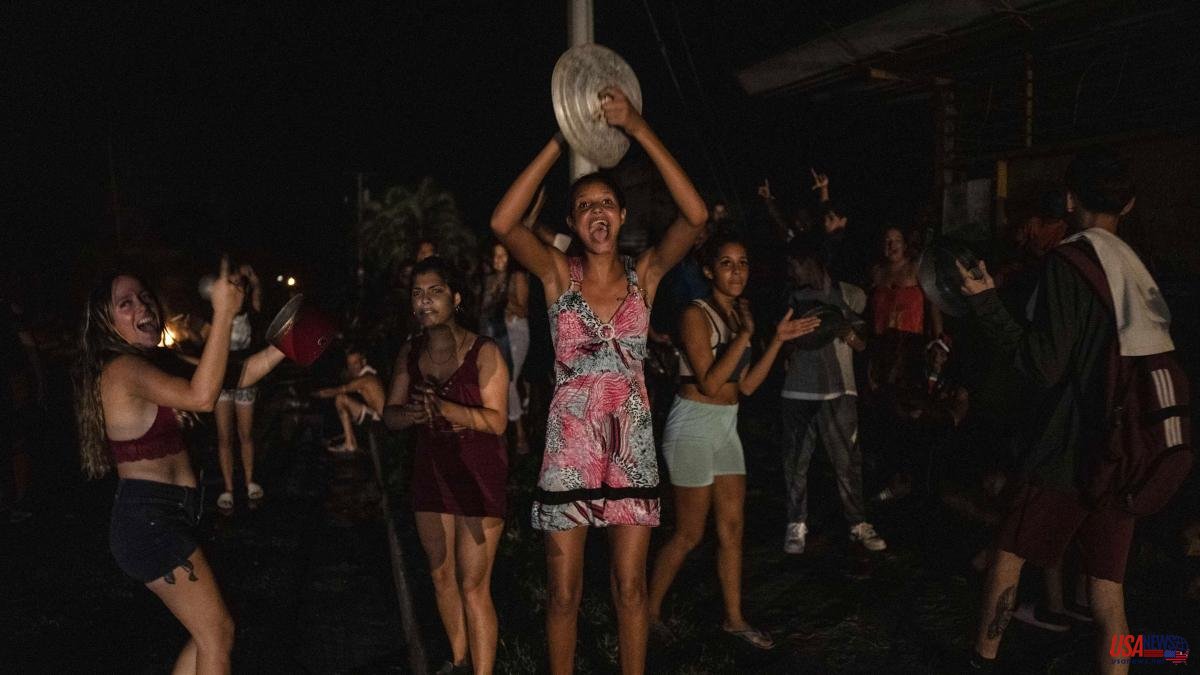 The chaos left in Cuba by Hurricane Ian, from the collapse of the electrical system to problems in the water supply and telecommunications, is fueling latent discontent after two years of economic crisis and fueling protests in the streets of Havana this Friday. and other cities of the island, for the second consecutive night.

Three days after the passage of Ian with category three, which devastated the western end of the island and left three dead and extensive material damage, the country has barely recovered from the total blackout it suffered on Tuesday, despite the efforts of authorities and specialized teams .

Most of the 11.1 million inhabitants do not have electricity - at most a few hours a day -, most shops and service centers (gas stations) remain closed, the pumping of running water is stopped and the internet on mobile phones works intermittently.

The state-owned Electric Union (UNE) announced that it managed to unify the network, divided after the energy "zero generation" event on Tuesday, but recognized difficulties beyond the lines: half of the 14 plants in the country are stopped, including the two older.

In this context, there have been sit-ins, rallies, and cacerolazos in different places, such as in Guanabacoa (west) and the Havana neighborhoods of Vedado, La Palma, and Bacuranao. "The problem is that people have been without electricity for a long time," explained Alfredo, a neighbor who witnessed one of them.

The protests this Friday follow those that took place the day before in Camagüey (east), Batabanó (west) and in humble neighborhoods of Havana such as El Cerro, Arroyo Naranjo and San Miguel del Padrón. "In the Cerro, there has been no water or current for 72 hours. People went out into the streets because the food that one buys with twenty sacrifices is spoiled," Mercedes, a septuagenarian, explained to Efe.

Luis Antonio Torres Iribar, first secretary of the Communist Party of Cuba (PCC, the only legal one) in Havana, assured that "protesting is a right," according to the state agency Prensa Latina. "We had to face isolated situations where there were popular claims regarding the situation of water, electricity, and the loss of food due to lack of electricity. We consider these claims fair," Torres Iribar said in statements to state television.

All these protests ceased without violence with the deployment of police officers in the area, followed, in some cases, by UNE trucks to repair the damaged lines.

Specialized platforms such as Netblocks, Internet Outage and Cloudflare Radar denounced that the Cuban government blocked internet traffic from the island almost completely from 8:00 p.m. local time and until after 3:00 a.m. on Friday. These specialized organizations agreed, along with several activists, in pointing out that it was an attempt to silence the protests and prevent their spread, since their live broadcast on networks is normal. The Cuban government did not provide explanations for the incident and the official media did not pick it up.

The trigger for the protests is the continued blackout in recent days, but the complaints go further and point to the Government, complaining about the general situation in the country. Cuba has been going through a serious crisis for two years due to the combination of the pandemic, the tightening of US sanctions and errors in economic and monetary policy.

In this time, food and medicine shortages have become chronic, queues have multiplied, the value of the peso has sunk - from 24 to a dollar to almost 200 in the informal market - and inflation has skyrocketed.

Blackouts have become frequent. Between July and September there were only two days without power cuts at some point in the country. In certain localities they reach twelve consecutive hours a day.

The Cuban energy system was in crisis before Ian. Seven of the eight terrestrial thermoelectric plants (there are another six floating ones leased) are over 40 years old, when their estimated life is 30. The plants and the network also suffer from a prolonged investment and maintenance deficit.

The protests have grown parallel to the blackouts. In the last three months, several dozen have been registered, as well as Santiago de Cuba (east) and Havana, according to a count by the independent media Inventario project. Among them, the two days of demonstrations in Nuevitas (east) stood out.

The cuts are an obvious factor of dissatisfaction. In fact, the anti-government protests of July 11, 2021, the largest in decades, started in San Antonio de los Baños (west), during a blackout.