Schedule and where to watch today on TV

The 'Finalissima' is already here. 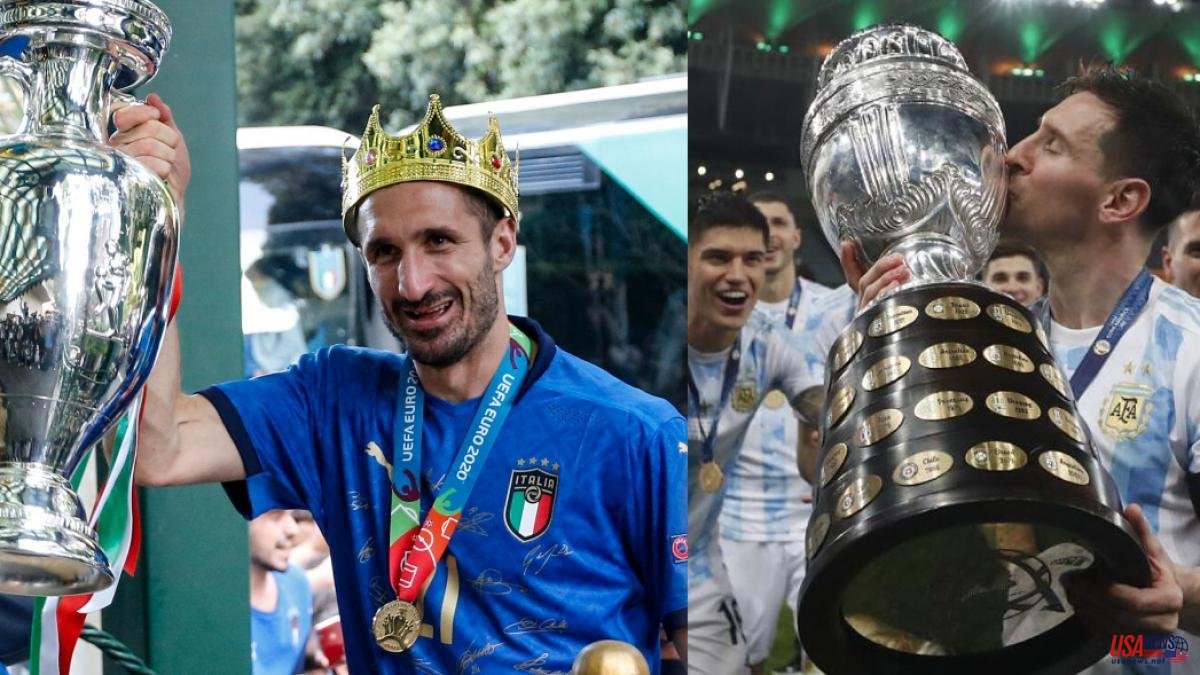 The 'Finalissima' is already here. This Wednesday, June 1, Italy and Argentina will meet in a match between the champion teams of the last edition of the European Championship and the Copa América, respectively. This competition picks up the witness of the Artemio Franchi Cup, which was organized in 1985 and 1993.

The match will begin at 8:45 p.m. at Wembley Stadium, London, and will be seen live on La1. You can also follow minute by minute on the La Vanguardia website.

For the Azzurri, this match will be an opportunity to reclaim their place in the elite of international football. After failing to qualify for the 2018 World Cup, Roberto Mancini took the reins of the national team and brought glory back to the country. At Wembley, the scene of the duel against Argentina, the transalpines lifted the second European Championship in their history, culminating a streak of 34 games without losing. And they did it in front of the host, England.

However, when it seemed that Italy was returning to the Olympus of football - currently, it is sixth in the FIFA ranking -, a new catastrophe was consummated. After losing to North Macedonia with a goal in the 92nd minute (0-1), the European champions ran out of options to qualify for the World Cup in Qatar. The four-time world champion will miss the event for the second consecutive time despite having shot more than 30 times at Stole Dimitrievski's goal.

"The disappointment is still great, but we have to start over," Mancini summed up ahead of the duel against Argentina, about which he commented that he would play the "heroes of Wembley". The match will also be special for Giorgio Chiellini. The captain of the Azzurra, at 37 years old, will play his last game with the national team after 117 caps. From this moment on, Mancini will bet on starting a facelift for the team to give it fresh air.

For its part, Argentina lives in a cloud. After 28 years and seven lost finals, the albiceleste was crowned champion of America in 2021 against Brazil and in the Maracana. The victory against the canarinha (1-0), with a reduced capacity of 10%, also meant the first trophy with the senior team of Lionel Messi, who in this way was able to avenge the four occasions in which he was left at the gates.

The team coached by Lionel Scaloni sees the Qatar World Cup as a perfect opportunity to become world champions for the first time since 1986 and recover from the 2018 debacle, with a squad that mixes youth with experience. There are still Ángel Di María —who will retire from the national team after the Middle East event— and Messi himself from that generation of Argentines who won gold at the 2008 Olympic Games. “It's a good test for us to see how where we are and how we have to continue”, was the description that 'el fideo' made of the 'Finalissima' for Olé.

This will be the third time that a duel between the champions of Europe and South America has been held. France won the first edition against Uruguay in 1985 (2-0), while Argentina raised the second, against Denmark, in 1993 (1-1, 5-4 on penalties).

In addition, it will be the sixteenth meeting between the Italian and Argentine teams. At the moment, the balance is slightly favorable to the transalpines (6 to 5), who prevailed in the group stages of the 1978 and 1982 World Cups. However, the last time their paths crossed in an official duel, it was the albicelestes who took the cat to the water. In the semifinals of the 1990 World Cup, Argentina won on penalties and certified their place in the round, although they ended up losing to West Germany in the grand final.