Santa Javelina at the missile fair

All wars start on a carpet, and the Ukrainian has returned to shake it up. 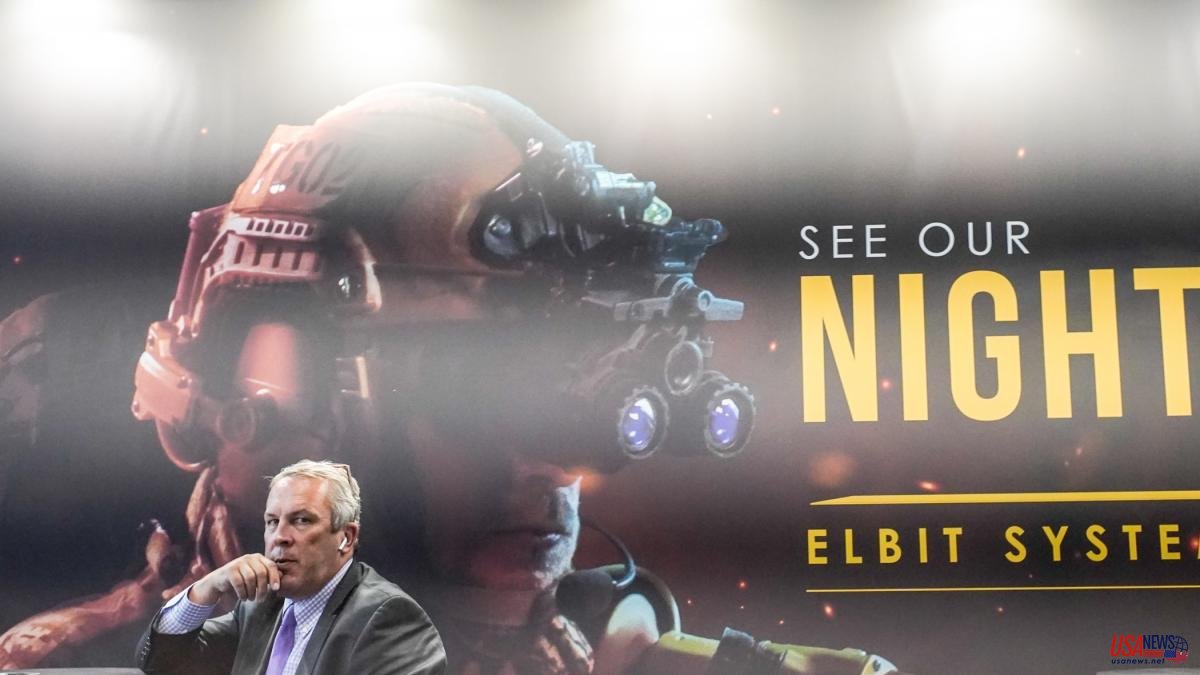 All wars start on a carpet, and the Ukrainian has returned to shake it up.

On a giant screen, Ukraine projects real images of its army firing missiles and how they hit the Russian target. In loop.

Suited businessmen walk past the screen unaccustomed to seeing this. Let's see, at their fair, the real impact of the projectiles they sell and buy. Because the explosions on the high-tech screens at Eurosatory – the world's largest air-land arms fair – are virtual and aseptic. Until the Ukrainians have arrived displaying on this carpet images of twisted Russian metal: it is still hot and with traces of blood.

In a fair full of written texts to say without finishing saying, at the Ukrainian stand they only give a clear message: “Ukrainian Army. Together we will win!” Nothing more. Except for the loop of visual impacts before which some take selfies as if it were the Eiffel Tower.

The models of Russian tanks or helicopters that appear gutted on the big screen were exhibited eight years ago, pristine, at this same fair.

–Ukrainians call it Santa Javelina –says Manolo, a former Italian surfer who attends the spacious stand of the American Lockheed Martin, next to the Ukrainian screen.

The Saint, terror of the Russians, is the Javelin, a highly effective American man-portable anti-tank missile – “fire and forget” – manufactured by Lockheed Martin.

They have it exposed, and Manolo shows on his mobile the image that the Ukrainians have created of a saint holding a Javelin missile as if it were a Baby Jesus.

Lockheed Martin also exhibits two Thaad missiles framed in a large aerial image of the Arc de Triomphe in Paris. The two missiles are aimed at a nearby display case where Leica displays its Apo-Televid 82 telescopic lens, ideal for spotting the enemy.

Campañà or Capa, pointing their Leica cameras, would today see Leicas pointing at them.

At the stand of Fassi, the Italian manufacturer of combat cranes, two waiters are polishing lines of glasses into which they will pour Cristian Senez champagne. The shine that they take out of the glass contrasts with the glass exhibited by the adjoining stand, the also Italian Isoclima: thick glasses with very strong impacts from projectiles that have not managed to pass through them.

The small stand of Lausberg, a German manufacturer of wooden boxes for ammunition, appears. The attendant, perhaps the founder's grandson, hands me his card. In it he states that the company was created in 1941, the year Germany invaded Russia. Best not to ask what started fitting.

FN Herstal, Belgian manufacturer of pistols and rifles, presents itself as heir to "a unique legacy of skills" and illustrates its bags with the new HiPer, "the next world reference pistol".

This new model would have excited Gavrilo Princip: with an FN Herstal pistol he assassinated the heir to the Austro-Hungarian crown in 1914, causing the First World War.

War crosses time and time, war. “Do you remember the famous scene in The Matrix where Keanu Reeves dodges bullets? says a brochure from Nammo, a Scandinavian manufacturer of bullets and shells. Well, our facilities have cameras capable of taking 2.1 million photographs per second”.

The pandemic has drastically reduced the presence of Asian countries at the fair. But the invasion of Ukraine has triggered the participation of the countries of northern and eastern Europe.

The Croatian HS presents its new H11 pistol. "Hope for the best," they say of the gun. Depends if you're in front of or behind the trigger.

– What advantage do they have?

- They are silent. The enemy does not hear you, they tell me.

–What is special about it?

I go to the Czech CZ stand and ask if they have taken advantage of the pandemic to perfect their Scorpion EVO 3 A1 model.

With this model of submachine gun, among other weapons, the Charlie Hebdo massacre was caused. Here in Paris, city of light.

"Life is in the details," says the Latvian company Brasa, equipment for soldiers. I'm afraid death, too.

At the Arquus stand –formerly Renault Trucks Defense– they uncork Duval-Leroy champagne in front of a Tigre helicopter. It is the French zone, and the Ministry of the Army writes on large banners: Liberté, Égalité, Fraternité. Above all, don't miss out on fraternity.

At the booth of Turkish gunmaker Kilinc, Gabrielle – a receptionist at the fair – plays with a Model 2000 semi-automatic pistol. She points it at the temple of another receptionist, then places it under her own jaw. As if she was going to kill herself.

EasyPractice, made in Ukraine, offers plastic human skins adaptable to the body and simulating wounds from which guts or bones come out. It was created by a Kyiv doctor in the Donbass war in 2014. Now the skin is real.

The battlefield fuels our cars and computers. "Empowering the military," they say at the Microsoft booth. The Korean Hyundai sells its K2 MBT tank, "creative innovations for a better world."

The French Michelin offers “defense mobility”. Nothing new. In Dunkirk or Normandy, British soldiers already used their guides to find their way around. And the sincerity of the military section of the British Rolls Royce is pure luxury: "Pioneers in the power that matters."

Greek military helmet manufacturer Elmon serves candy in a helmet. The last time I saw food inside a helmet was in the Kaimakchalan, a Balkan mountain: farmers fed chickens in helmets of German soldiers from the First World War that had been left on the landscape.

Memory is important. That is why it is a pity that the Macedonian ammunition producer ATS, with a stand at the fair, does not keep the name under which it was founded as a bullet factory: Souvenir.

Suddenly, the ghost of Russia appears, banned from this fair. Two large Russian war artifacts appear on display: a BMP-3 combat vehicle and a Pantsir-S1 anti-aircraft missile system wedged into a large truck. Their appearance intensifies the mixture of reality and unreality that permeates this fair: they are made in real size and are... inflatable.

“They serve both to mislead the enemy, they have a thermal and radar trace, and for target practice,” says Andrés, a representative of i2K, the Californian company that manufactures them. They have twenty models of Russian and Western tanks, armored vehicles, missiles, fighter-bombers and helicopters. All inflatable.

Andorra fills the absence of Russia, even if it is only with three square meters: for the first time a company from the Principality, Freemindtronic, participates in this fair, some cracks in custom data encryption. "We're totally defensive," Eric says at his booth. They honor a country that has never invaded anyone.

In contrast, the Bulgarian company Hades presents a “kamikaze attack jet-drone”. She is called Nemesis, the goddess of revenge. Everything in this fair has a name. Except for the future, which we intuit is full of Nemesis. The French company Cerbair, anti-drone solutions, is clear: they offer “protection for a nameless future”.

In the speakers of the United States pavilion they play the mythical song Stand by Me (Stay with me) by Ben. E.King. The music reaches the stand of Smith and Wesson, pistols, revolvers and rifles since 1852. “His – says his catalog of gun owners – is the independence and freedom to live each day to the fullest and to collect each night, safe, in their homes."

The French Sterela offers spectacular comic-like mobile silhouettes for target practice. On one side of the silhouette, a man points a gun at you, and on the other side, the same man has an ice cream in his hand. The silhouettes turn unexpectedly.

-Frozen. Gun. Frozen. Gun... You have to be quick. In reality you can end up dead,” says Christophe, CEO.

In reality, the gun can be made of plastic and the ice cream can hide a bomb.

An accordionist, a cellist, a violinist and a guitarist enliven the stand of Atesci, a Turkish manufacturer of machinery to manufacture bullets. They play the melody of La Vie en Rose by Édith Piaf next to a circular machine that, to the rhythm of the music, models bullets.

The melody reaches the stand of the French EMD, equipment for defense professionals, and surrounds the mega-realistic mannequin they have lying on a stretcher: a soldier with his leg ripped off. And Édith Piaf ends up fused with her brutal amputation... When she takes me in her arms, and sings softly to me, I see life in pink...