Sanchez receives Aragonès in Moncloa to resume dialogue after Pegasus

As expected, Sánchez and Aragonès have already seen each other after the Pegasus crisis. 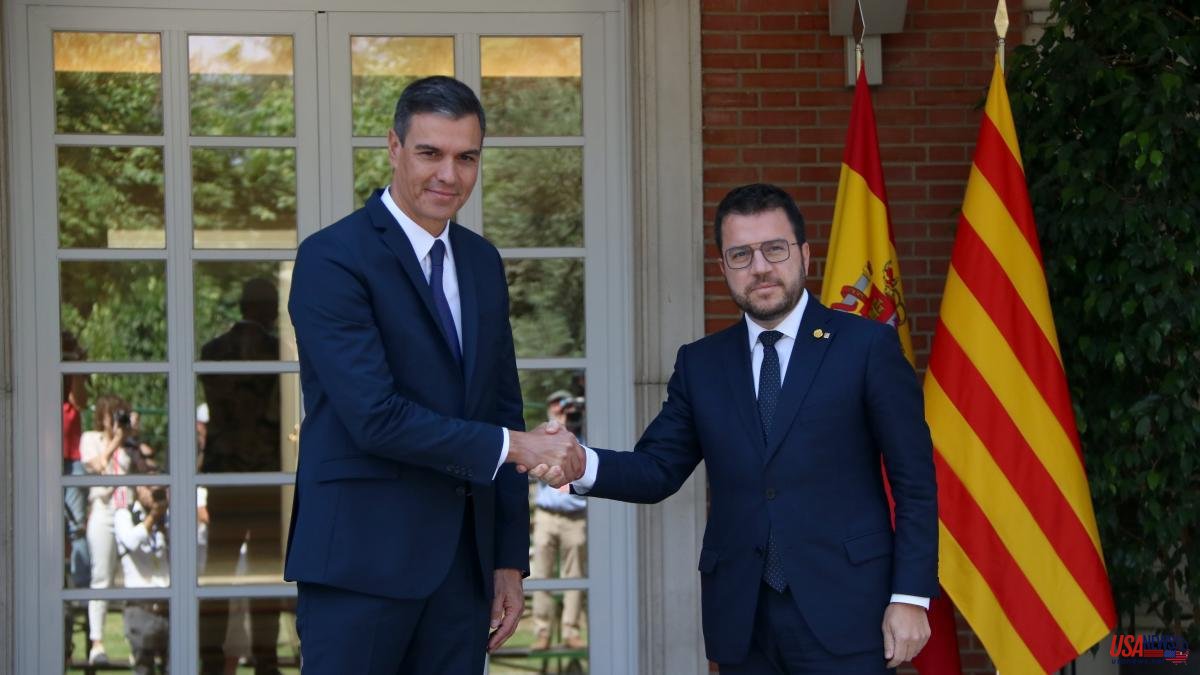 As expected, Sánchez and Aragonès have already seen each other after the Pegasus crisis. The President of the Government received the President of the Generalitat at the Palacio de la Moncloa at noon in order to hold a meeting - lasting about two hours - in which they hope to normalize the relationship and promote the dialogue table.

Aragonès arrived at the presidential complex after 12:00 p.m. and was received by Sánchez on the access steps to the main building. Following the usual ritual, flanked by the flags of Spain and Catalonia, both presidents shook hands and posed, somewhat coldly, for the photographers before greeting each other again and entering the interior of the building. Both governments are expected to report on the meeting at the end of it.

Today's is not the first meeting between Pedro Sánchez and Pere Aragonès since the espionage crisis broke out a few months ago against the pro-independence leaders, but it is the first time since then that both leaders have sat down to talk face to face, long and hard, of all this, and how to reshape the dialogue between governments that designed the ERC and the PSOE at the beginning of the Spanish legislature.

The rapprochement was fostered in two meetings in Madrid and Barcelona between the Minister of the Presidency, Félix Bolaños, and the Minister of the Presidency of the Generalitat, Laura Vilagrà. Meetings that also served to close a "framework agreement for dialogue and negotiation" in which both executives lay down the methodological bases of that process, commit to putting an end to the "judicialization" of the conflict and opt for the path of dialogue.

Aragonès goes to Moncloa, to a meeting that is expected to last about two hours, with the desire to gauge what the real will of the head of the central Executive is with dialogue, sources from the Generalitat point out. The president intends to obtain "a framework of guarantees" for the negotiation, since to restore trust, actions are required and not just commitments and words, these sources point out.

But the expectations "are very low", as the spokeswoman for the Government, Patrícia Plaja, already pointed out last Tuesday at the press conference after the meeting of the Consell Executiu. "We know where we come from and we carry a backpack of non-compliance, that is why guarantees and facts are required," point out the sources consulted, who believe that it is necessary to obtain from the meeting a clear commitment from the President of the Government with the dialogue roadmap .

In fact, sources from both executives agree that agreements are not expected, a priori, to come out of a meeting that both Sánchez and Aragonès are facing in order to rebuild trust between them and examine the current state of relations between their governments, limping after the recent crisis. Both the Sánchez team and the Aragonès team believe that work must be done without urgency to advance content that can bear fruit in the medium term, and that until there are tangible agreements of sufficient weight, the table will not be convened to ratify and make them. public.

The requests of the Government have not changed in all this time: self-determination, through an agreed referendum, and amnesty. But these will not be the issues that occupy the time of the presidents only. Although it is not on the agenda, Plaja said on Tuesday that in all probability the espionage of the independence movement will be addressed. "It is one of the issues that has broken and strained relations between the Government and the Government the most in recent months. Minister Félix Bolaños and Minister Laura Vilagrà have already discussed it. It is not on the agenda, but it is difficult think that it will not be talked about," said the spokeswoman, who also acknowledged that "expectations are not high because relationships of trust are diminished". "But it is important because it will be seen if there is a change in the Spanish government in relation to Catalonia," she countered.

"The situation of the relations between the two governments will be addressed, relations are not normalized or even close to being. The guarantees required by the Government and the dejudicialization folder will also be discussed," Plaja summed up, who believes that "it is not a meeting for the photo" but a "meeting from which concrete results are going to be demanded".