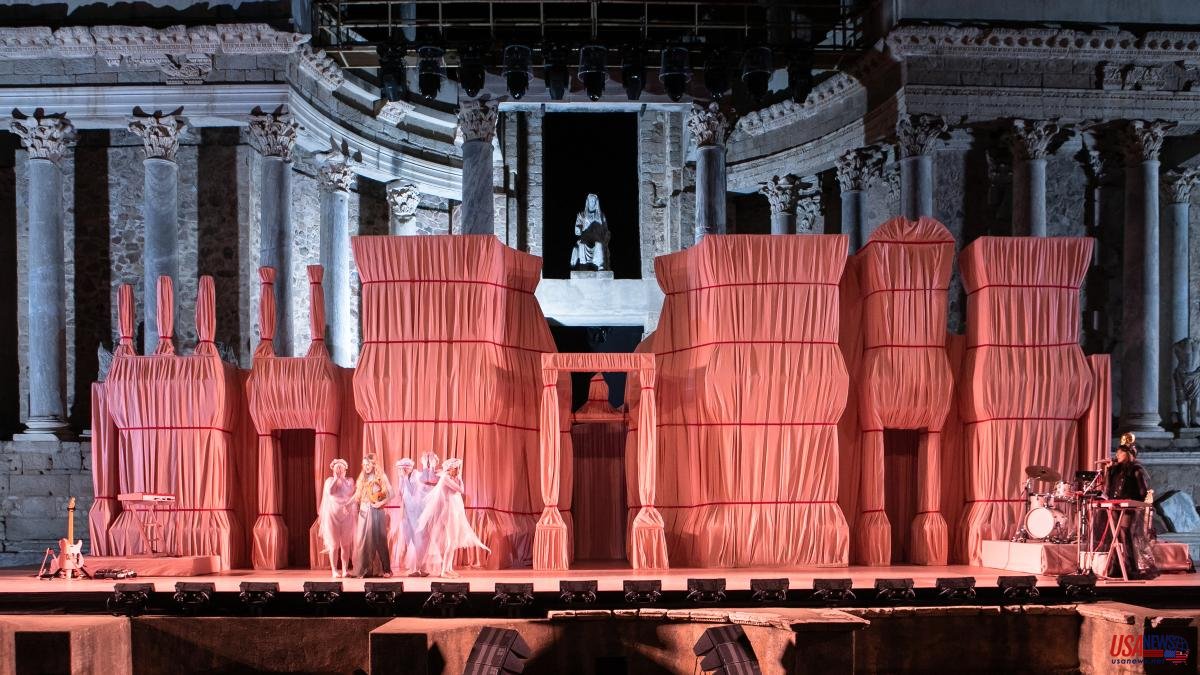 Debut night in Mérida. That of the singer Christina Rosenvinge in the theater. With a sapphic party. With a festive elegy and surreal touches to Sappho, the great poet of the island of Lesbos, who lived 27 centuries ago, long before the Christian guilt, and sang to desire and passion with total freedom. For some, she invented the modern way of understanding love, of speaking of the loving self, decisively influencing later poetry even though the canon has sidelined her.

And that is why on Wednesday at the Mérida International Classical Theater Festival, Rosenvinge revived her by turning her verses into effective songs and embodying her in front of a powerful set design that reproduced, on a much smaller scale, the impressive stage of the Roman Theater in the capital of Extremadura, with its two levels of columns, friezes and sculptures. A model still four meters high and wrapped, completely packed, with pink fabrics and ropes as if it were an installation by the couple Christo and Jeanne-Claude, who wrapped the Berlin Reichstag or the New Bridge in Paris with fabrics.

The result of the debut? Standing audience -although the Roman Theater of Merida was not full- and great applause for a performance in which Rosenvinge shone as a composer and singer -in fact some songs caught on with the public- although as an actress she was somewhat rigid, especially at the beginning , before the party in honor of Sappho took off contagiously after initial hesitation. And it will manage to envelop the public in the atmosphere of an elegant stage poem in which if the sound belonged to the singer, the powerful visual materialization was the work of Marta Pazos, a rising star of Spanish theater -she has been able to participate in the Mérida Festival because final could not put on a production in Avignon - it was left empty for him in the summer -, which turned his language into the Roman stones of the theater.

A world of powerful colors -in this case the ubiquitous pink that enveloped the model and which also became an unexpected sea, plus touches of elegant red, black and gold in a wardrobe that is sometimes used for real parades in the middle of a funeral -, surreal language -the scene of the half-watermelon turned into a female is simply priceless-, some almost Lorca-like androgynous character, and a great celebration of eros, of bodies, many times naked and dancing powerful choreographies in which the dancers -are eight women on stage who sing, dance, talk and play guitars, basses, keyboards and various percussions - fight and have poetic but visceral sex.

If the scenery of Pazos with the reproduction of the Roman theater wrapped, hidden, alluded according to the author to how Sappho herself has been hidden from the Western literary canon like a strange meteorite from 2,600 years ago, the dramaturgy of María Folguera has wanted to shed light more about what has been said about Sappho than about her own life, of which we barely know thanks to her verses -192 out of 10,000 have come down to us-, that she sang at weddings, that went very far, turned into hymns, and that they did not hide their love for other women. Dismantle myths such as that she committed suicide for the love of a man, something that Ovid wrote, remember that she invented love in her songs, how she was considered a prostitute, priestess, teacher, the legend that her poetry was ordered to be destroyed by a pope in the Library of Alexandria...

A life from which Rosenvinge takes the verses, and puts rhythms, progressive rock, Latin sounds, choral singing... and never fails with his evocations of love, loss, desire. He shines when he sings with slight melancholy that "it's midnight and today I'm sleeping alone", he remembers that "I wish and then I seek", one of his lovers, who is going to marry a man, evokes that "the time is coming, we will have to leave , you will have to teach me how to live without you", she sings to Aphrodite, lady of desire -who appears exuberant and naked in a pink bathtub-, she recognizes that Eros is a "sweet and bitter serpent against which it is useless to fight" and that "my skin hides a river that burns my interior".