Sacheen Littlefeather, the indigenous woman who rejected the Oscar awarded to Marlon Brando for her performance in The Godfather at the 1973 gala, has died at the age of 75, the Hollywood Academy, chaired by David Rubin, reported this Sunday. 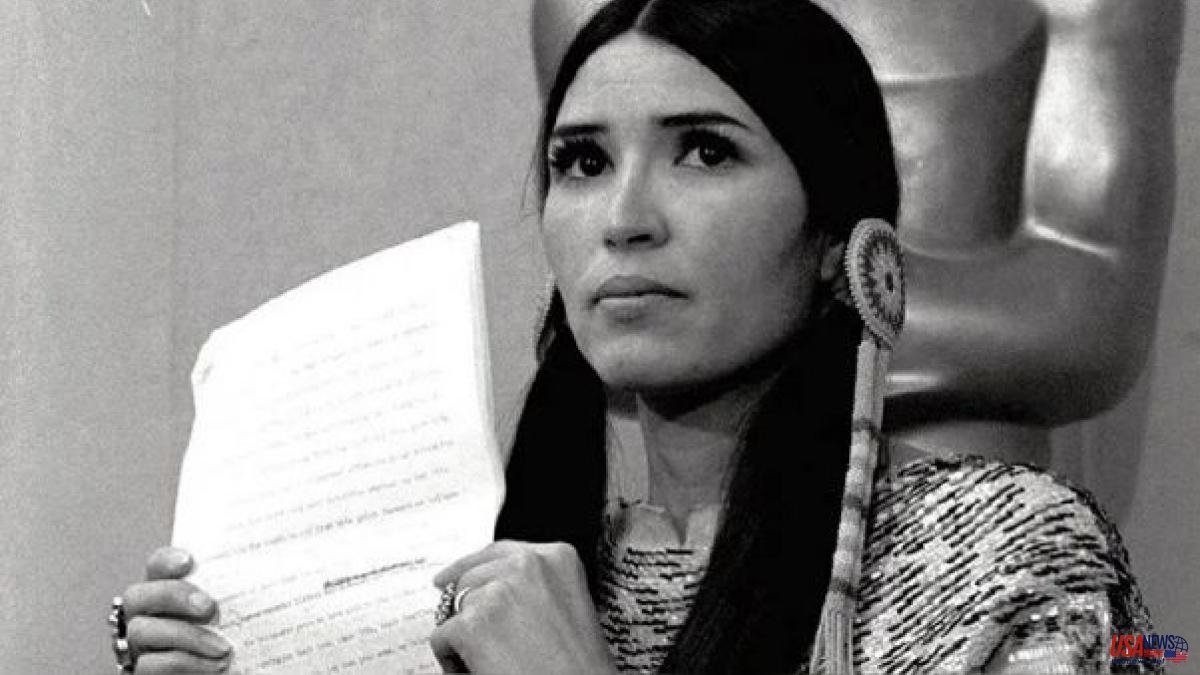 Sacheen Littlefeather, the indigenous woman who rejected the Oscar awarded to Marlon Brando for her performance in The Godfather at the 1973 gala, has died at the age of 75, the Hollywood Academy, chaired by David Rubin, reported this Sunday. It just so happens that just a few weeks ago, the interpreter and activist for the civil rights of indigenous people was honored by the same organization after apologizing for the boos she suffered almost 50 years ago after going on stage at the Oscars and , on behalf of Brando, refuse such recognition in protest of Hollywood's 'mistreatment' of Native Americans.

"When you took the Oscars stage in 1973 to decline to accept the Oscar on behalf of Marlon Brando, in protest of the film industry's misrepresentation and mistreatment of Native Americans, you made a powerful statement that continues to remind us of the need for respect and the importance of human dignity," Rubin wrote in the letter.

"The abuse you endured for that statement was unwarranted. The emotional toll you have experienced and the damage to your own career in our industry is irreparable," Rubin added in his letter. "For far too long, your courage has gone unrecognized. For this, we offer both our deepest apologies and our sincerest admiration."

Littlefeather immediately responded with a statement joking about the "patience" of indigenous communities. "Regarding the apology from the Academy, we are very patient people. It's only been 50 years! We have to keep our sense of humor at all times, it's our method of survival."

In that recognition evening organized by the institution, held on September 17 at the Museum of the Film Academy in Los Angeles, Littlefeather appeared in a wheelchair. His voice was very weak and he told the audience, with that sense of humor that he appealed to in the letter, that he had begun to get rid of his possessions. “Soon I will cross over to the spirit world. And you know, I'm not afraid of death." She was applauded with the entire audience standing.

Littlefeather suffered from breast cancer and, among her brief filmography, titles such as The Counselor (1973), The Trial of Billy Jack (1974), Cloud of Fire (1975) and The Winterhawk (1975) stand out. The seventh and last film she worked on was Chase in the Sun (1978), where she was credited as 'Navajo Woman'.

Her death comes almost a year after the death of her husband, Charles Koshiway, to whom she was married for more than thirty years.

At the gala on March 27, 1973, Brando had already notified the organization that he would not attend the event and that the Indian rights activist and aspiring actress Sacheen Littlefeather (Little Feather) would come on his behalf, but he did not say anything about the decision to reject the Oscar in case of winning.

The surprise came when Roger Moore and Liv Ullman appeared on stage to present the award. Among the nominees, in addition to Brando, were Michael Caine and Laurence Olivier for The Footprint, Peter O'Toole for The Ruling Class and Paul Winfield for Sounder. Ullman read Brando's name written on the envelope and at that moment the cameras picked up as Littlefeather, dressed in traditional North American costume, walked with a serious face towards the stage.

Moore kindly offered her the Oscar but the actress refused to hold it with a gesture that left everyone bewildered. He had eighty-five million viewers in front of him watching the gala on television. She then gave the following speech: “Greetings. My name is Sacheen Littlefeather. I am an Apache and President of the National Committee for the Affirmative Image of Native Americans. Tonight I come on behalf of Marlon Brando and he has asked me to tell you, in a very long speech, that I cannot share with you now due to lack of time, but that I will share with the press later, who unfortunately rejects this generous award . And that's because of the mistreatment of American Indians today by the movie industry. Excuse me (applause and boos are heard from the audience) . And on TV and in rerun movies...and also because of what happened recently at Wounded Knee. I pray that I have not been a nuisance tonight and that we may in the future meet our hearts and minds with love and generosity. I thank you on behalf of Marlon Brando." Although her brief speech was applauded by the audience, it was also greeted with boos, racist gestures and subsequent jokes by the presenters of the gala, Raquel Welch and Clint Eastwood.

The activist later recounted that some men had to prevent an enraged John Wayne, a mythical figure of the western, from coming out from behind the scenes and dragging her away after hearing her words. Howard W. Koch, producer of the gala, had previously warned the woman that her speech should not last more than a minute or she would be arrested.

Littlefeather, leaving the gala, recited Brando's full speech to the media, which published it the next day. “When I was nominated for The Godfather it seemed absurd to me to go to the ceremony. It was grotesque to celebrate an industry that had systematically maligned and disfigured American Indians for six decades while two hundred Indians were now under siege at Wounded Knee."