Russia and Cuba dust off their alliance "against the Yankee empire"

The presidents of Russia and Cuba got on the time machine this week to return to their Soviet-era idyll and, together, intone the strongest condemnation against "Yankee imperialism" as guilty of all evils. 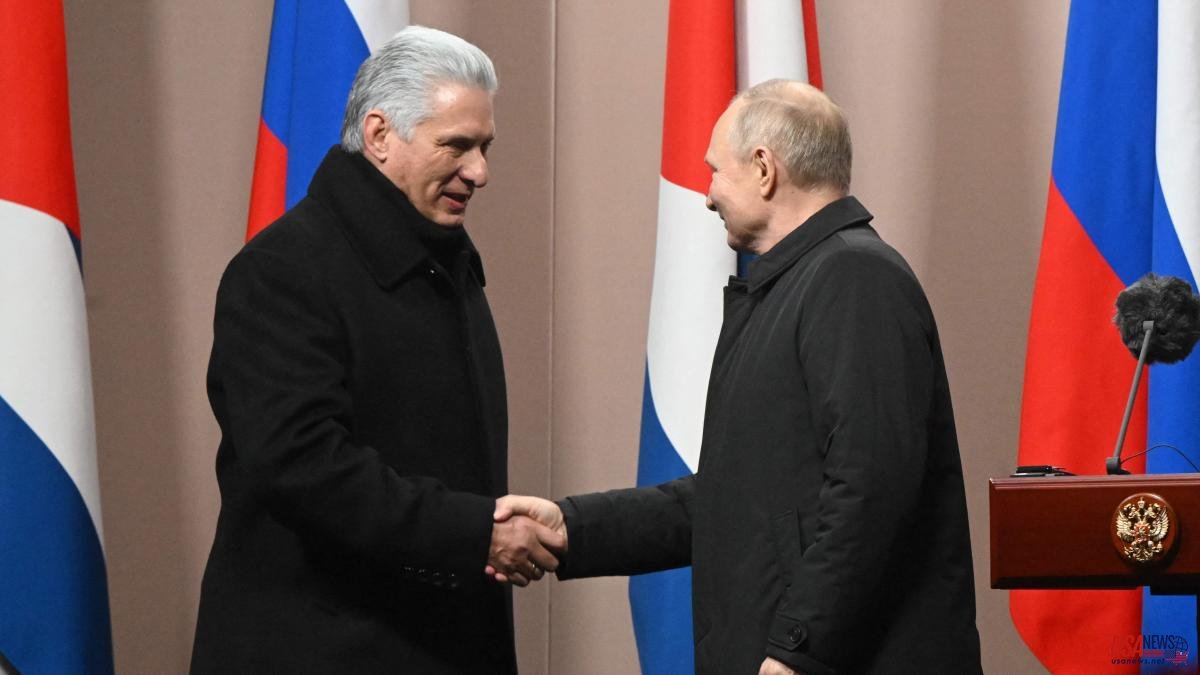 The presidents of Russia and Cuba got on the time machine this week to return to their Soviet-era idyll and, together, intone the strongest condemnation against "Yankee imperialism" as guilty of all evils. In his more than friendly visit to Moscow, the head of the Cuban State, Miguel Díaz-Canel, unequivocally defended Putin regarding the invasion of Ukraine and blamed the "conflict" on the United States.

The return to the Cold War thus staged by the two leaders is due to unromantic reasons. To begin with, Cuba has a constant and sound motivation, substantiated in the recent postponement, until 2027, of the debt of 2,300 million that it had contracted with Russia.

In addition, the Eurasian country exports huge amounts of oil to the island -there are at least three deliveries in separate ships loaded with hundreds of thousands of barrels each-, as well as wheat and fertilizers. It is obvious that the conditions must be acceptable to the Cuban government, which is bankrupt.

In exchange for all this, Moscow gets full support for the invasion of Ukraine by a country that is impoverished and small but, incredibly, retains great influence in Latin America.

And this as far as is known, since the precedents indicate that the scope of the agreements between these two old allies can go much further. For example, in terms of Intelligence against Washington.

Some fragments of the speech that Díaz-Canel gave in the Duma and of his intervention before Putin are brought to you. Referring to the invasion of Ukraine, and avoiding using that word or even the more neutral term "war", the Cuban leader said that Havana's "first commitment" to Moscow is to "defend the position of the Russian Federation in this conflict"; a conflict whose causes "must be sought in the aggressive policy of the United States and in the expansion of NATO towards the borders of Russia".

Putin also left some other pearl. "You know that Russia and the Soviet Union have supported the Cuban people in their struggle for sovereignty and independence," he told his island guest, as if the world was unaware of the relationship of absolute dependence that Cuba maintained with the USSR for almost 30 years.

But the most solicitous of the two interlocutors was undoubtedly Díaz-Canel. "For us, this visit has a deep significance; we do it at a time when our two nations are subjected to unfair, arbitrary sanctions, which come from and have their origin in the same enemy, the Yankee empire," he told his Russian counterpart. and former KGB agent.

The 2.3 billion debt that Cuba maintains with Russia was detailed by Moscow just when its parliament approved its restructuring through a deferral of payment. The decision was adopted on February 22, that is, two days before the invasion of Ukraine. The Kremlin had already made some reference to the debt, but in very generic terms.

As materialized when the Duma approved the deferral of payment, Russia had been granting state loans to Cuba between 2006 and 2019. The loans went to the agricultural and metallurgical sectors, certain transport and energy supply infrastructures. Havana stopped paying as early as early 2020. The two governments then negotiated a way out. of course in secret.

There was a more than interesting background. In 2014, coinciding with Russia's annexation of Crimea, Moscow had forgiven Cuba 90% of the 35 billion dollar debt it had with the former Soviet Union. The remaining 10%, that is, 3.5 billion dollars, would be invested in joint investment projects on the island; projects that mostly never came to fruition.

That same year as the prelude to the current invasion of Ukraine, Putin agreed with Raúl Castro to reopen and reuse the US communications detection center that the USSR had built on the island in the 1960s, the Lourdes Sigint station (signals intelligence), located near Havana.

Putin himself had ordered the closure of these espionage facilities in 2001, according to him as a gesture of goodwill towards the US and according to experts for financial reasons. The center's reopening pact was reported in the summer of 2014 by the Russian newspaper Kommersant as a "framework agreement" to resume US Russian surveillance from the Caribbean.

History and stories aside, the support of a country of reference for the Latin American left such as Cuba is not negligible today for a power to which almost the entire West has turned its back. Nor is it too much, given the circumstances, the support of nations directly confronted with the United States such as Venezuela or Nicaragua.

Until now, Brazil, Russia's main trading partner in the region, has been placed in a different category, that of strategic ambiguity. The position adopted by Luiz Inázio Lula da Silva after the controversial "neutrality" defended by Jair Bolsonaro remains to be seen.

At a time when the United States is not paying much attention to what until a few years ago it considered its backyard, Putin is. Central and South America, and especially the largest of the Antilles, have become vital for the Russian president. Reasons are not lacking.