Rushdie: "I have to live my life"

The fatwa that Ayatollah Khomeini launched on February 14, 1989 to the "Muslims of the entire world" urging them to "quickly execute" the writer Salman Rushdie plunged Western cultural circles into a state of shock that lasted for decades and now has been activated again. 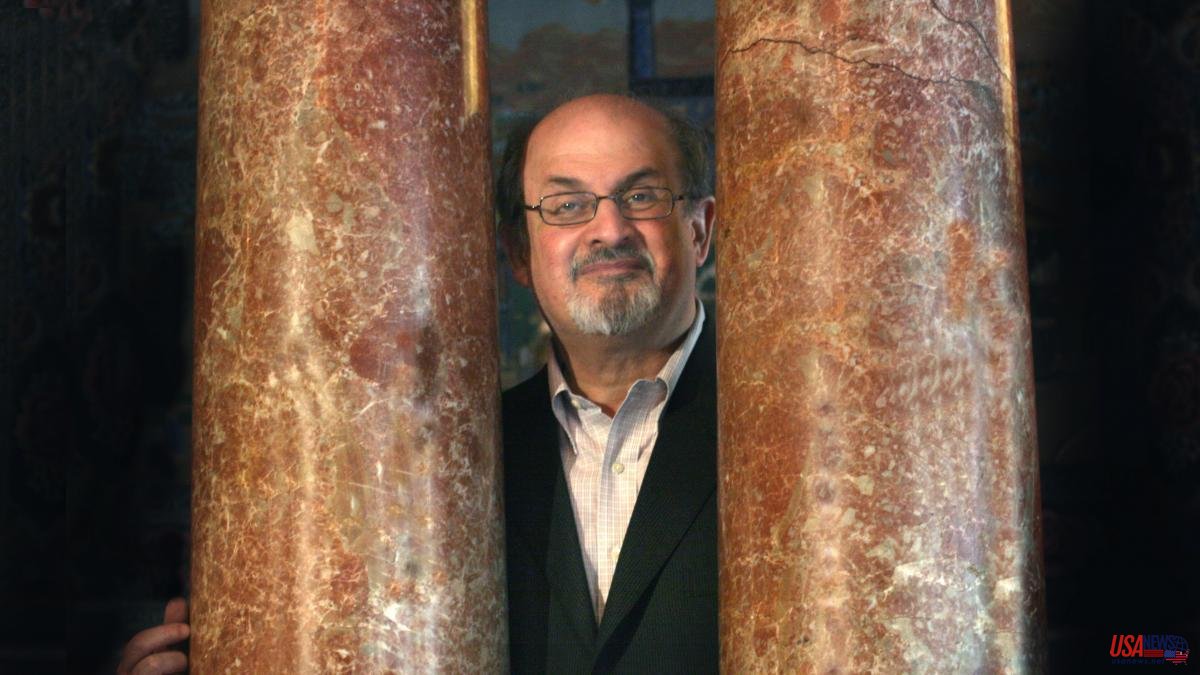 The fatwa that Ayatollah Khomeini launched on February 14, 1989 to the "Muslims of the entire world" urging them to "quickly execute" the writer Salman Rushdie plunged Western cultural circles into a state of shock that lasted for decades and now has been activated again. In the months that followed the beginning of the Satanic Verses crisis, the escalation of deaths in the anti-Rushdie demonstrations that took place in different Muslim countries; the murder of his translator into Japanese and the attacks against his Italian translator and his Norwegian publisher generated great international tension and an atmosphere in the world of books that oscillated between maximum caution and, directly, fear.

No such situation was remembered; the danger seemed to threaten not only the writer but everyone around him. For the launch of Los versos satanicos in Spain, 17 labels lent themselves to symbolically co-edit with Seix Barral, who had contracted the rights, protecting it. The Frankfurt Book Fair of 1989 officially requested "pardon" for Rushdie, but the persecuted work was not exhibited that October at any stand. In later years, Iranian participation in the meeting was vetoed.

For almost ten years Rushdie combined his literary work, which included promotion tasks, with an existence under police protection, developed in semi-clandestine. The interviews that he gave in spades were arranged with great secrecy and took place amid precautionary measures.

In October 1995, my friend Enrique Murillo, then an editor at Plaza

Ruhsdie ate heartily –pepper and meatball salad, washed down with Viña Real– and spoke enthusiastically about his book, “the second I write on a computer”, inspired by an image of the Alhambra glimpsed during his student years. He had put on paper a "fundamentally melancholic" narrative despite its continued humorous traits.

He also spoke, in response to my questions, of the existence he had led, hidden and regularly changing his address for six years. "Over time this kind of life becomes less horrible, and one develops a series of strategies to continue functioning," he explained. In England they believed that the threat was so savage that it could not last long, and I thought so too. However, it has lasted so long that sometimes I wonder if it was not like a kind of dream, and if I should not return quietly to my house and live a life like the one I led before.

-Why do not you do it? I asked with an excess of innocence.

“Because the people who take care of my security say that I shouldn't let my guard down, that if I weren't careful, a terrorist attack against me could happen right away.

It had been speculated that he might undergo surgery that would make his face unrecognizable. She denied it outright: “I have never thought about it, not for a minute. That would be a surrender. I could not write again, nor see my friends or my family without embarrassing myself. Already with the coffee, I asked him about his conversion to Islam, from which he had backed down. “It is something that I regret, it was a decision that was the result of stupidity and desperation. I thought, 'If that's what they want, they're going to get it. But it didn't work and it was a mistake."

I saw Salman Rushdie again a few months later in Barcelona, ​​on April 27, 1996. The author of Midnight's Children appeared by surprise, amid heavy security, at the closing ceremony of the Congress of the International Union of Publishers , which was held in the city. In his speech he defended the vitality of the contemporary novel, charged against the "Eurocentric" vision of part of the cultural world and recalled, probably thinking of his own work, that "there has never been a great literary work that has not been attacked”. In a subsequent very restrictive press conference, he stated that his situation "has not changed much, although there is currently no popular fervor for seeing me dead that there was seven years ago."

The novelist himself has recounted in his memoir Joseph Anton the complicated and hectic experiences of this period, which lasted from 1989 to 1998, when the Iranian government, pressured by the British, finally announced that it was giving up instigating his execution, and Rushdie decided to resign. turn to police protection to try to lead a normal life.

It was in this new stage that, as curator of the Year of the Book and Reading 2005, I contacted him again through his editorial intermediaries (now the Random House Mondadori group). He agreed to participate in an act with a certain symbolism for Barcelona's cultural life, the inaugural session of the cycle The value of the word, with which the Jaume Fuster Library, the new flagship of the Citizen Library Consortium, opened its programming. In a conversation with the novelist Rodrigo Fresán, Rushdie referred to his narrative style, close to magical realism: "If in the 19th century there was a broad consensus between readers and writers about what the world was like, a consensus that supported realism, this agreement no longer exists. Literature must respond to a global world, since "never at any time in history have there been so many displacements as now". They are typical of the time, he said, the interconnection between public life and private life, and between East and West, "and we must find ways to narrate it."

After that intervention, Salman Rushdie has returned to Spain on several occasions, apparently without protection because, as he has stated on several occasions, "I have to live my life." The decision to do so took a terrible toll on Friday in the town of Chautauqua, site of a famous cultural festival, where the arrow launched in 1989 by Khomeini reached its destination, awakening a great sense of tragedy, indignation and impotence worldwide. .

"The people who take care of my security say that I should not let my guard down, that if I were not careful, a terrorist attack against me could immediately take place," Salman Rushdie told us in a Madrid restaurant near Congress, twenty-seven years ago.