The ERC WhatsApp groups were fuming this Wednesday morning already during the control session while the president of the Generalitat spoke, in Parliament. 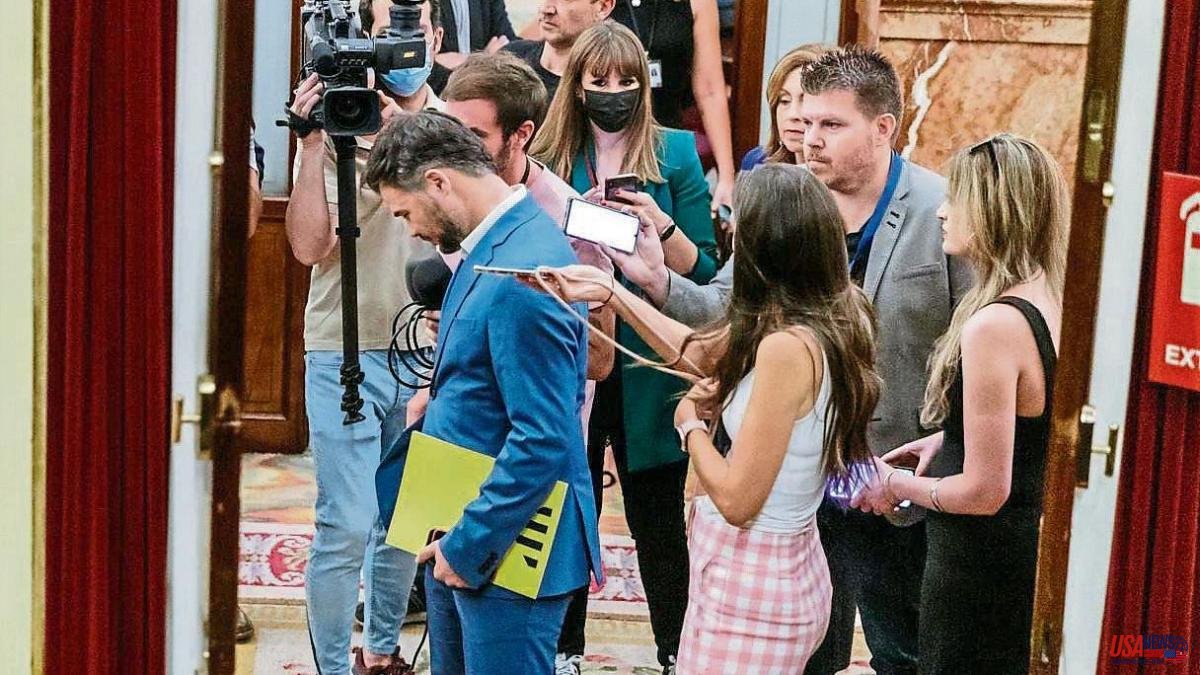 The ERC WhatsApp groups were fuming this Wednesday morning already during the control session while the president of the Generalitat spoke, in Parliament. The declarations of its leader in Madrid, Gabriel Rufián, began to resonate. "To say that the independence of Catalonia was proclaimed through a tweet of mine is moron", he said on TV3 about his famous tweet of the 155 silver coins of October 2017, to add that "the moron is the one who proclaimed it, not the one who He posted a tweet." An invective to Carles Puigdemont who has felt like a kick in the belly at Junts, but even more so at ERC.

A day that had to shine for the approval in the Parliament of the new Catalan law with which the PSC, ERC, Junts and the commons saw them and wished them, has suddenly darkened. The photo on the noble stairs of these groups, a few minutes before, to celebrate it has been torn.

“In a heartbeat, what if the gentlemen who thought they were James Bond, what if [Jaume Asens] didn't go to Waterloo so much, and now this one. There are too many things...”, they affirm from the Republican party. "Let's see who the moron is...", they add. Rufián has apologized and apologized without nuances two hours later. He has cost you. He has asked for them on the third occasion that he has been offered to do so. In addition, late, in the opinion of his colleagues, and after Pere Aragonès himself disavowed it, microphone in hand in Parliament, in response to the president of the post-convergence group, Albert Batet, who asked him for explanations: "Not only do I not agree with these words , but I absolutely disagree and I am convinced that they will have an explanation or a correction ”. Aragonès later exchanged messages with Puigdemont to show him his support.

And it is that in ERC there is a lot of discomfort with Rufián and there are those who already doubt that he can be number one again and for the sixth time for the next general elections, no matter how much he has obtained excellent results so far.

Gabriel Rufián is a protégé of Oriol Junqueras. The president of ERC trusts him and his is the idea that he present himself as a candidate for mayor of Santa Coloma de Gramenet. The ERC leader in Madrid venerates Junqueras and did not deny him the possibility, as long as he could combine it with his task in Congress.

But Rufián has gone from being increasingly questioned internally to being unequivocally so publicly. This Wednesday, after Aragonès, some Republican deputies such as Ruben Wagensberg have not refrained from criticizing Rufián on the networks. Josep Maria Jové, president of the ERC parliamentary group and prosecuted precisely for his leading role in 1-O, expressed "all the support and all the respect for President Puigdemont". The entire ERC bench applauded him. And even the general secretary of the party, Marta Rovira, was explicit: “We can't be wrong about our opponents either. And if we make a mistake, we rectify it”.

The anger in ERC is comparable to that of Junts. Josep Rius, who was Puigdemont's chief of staff and today is one of the vice presidents of the formation, has pointed out that Rufián "has crossed all the red lines." “It is a style of doing politics that is despicable, inadmissible and that must be banished”, he stressed.

It is not the first clash between the partners due to Rufián's statements about Puigdemont. A few weeks ago sparks flew after he linked the former president with the Russians and Vladimir Putin's entourage.

A few days ago in Congress, he caused discomfort again by asking the leader of United We Can in the Lower House, Jaume Asens, to stop "going to Waterloo so much", where Puigdemont resides. At the Junts meeting, on Saturday in Argelers, the former president replied: “It is not normal to have to visit someone in Waterloo. What is normal and decent is to visit him so that he does not feel alone, so that he feels well accompanied”.