The leader of the ERC parliamentary group in Congress, Gabriel Rufián, has provoked the anger of the Prime Minister Pedro Sánchez by exhibiting three rifle bullets from the lectern of the Lower House with which he wanted to reproach him for the Executive's turn in politics with Morocco. 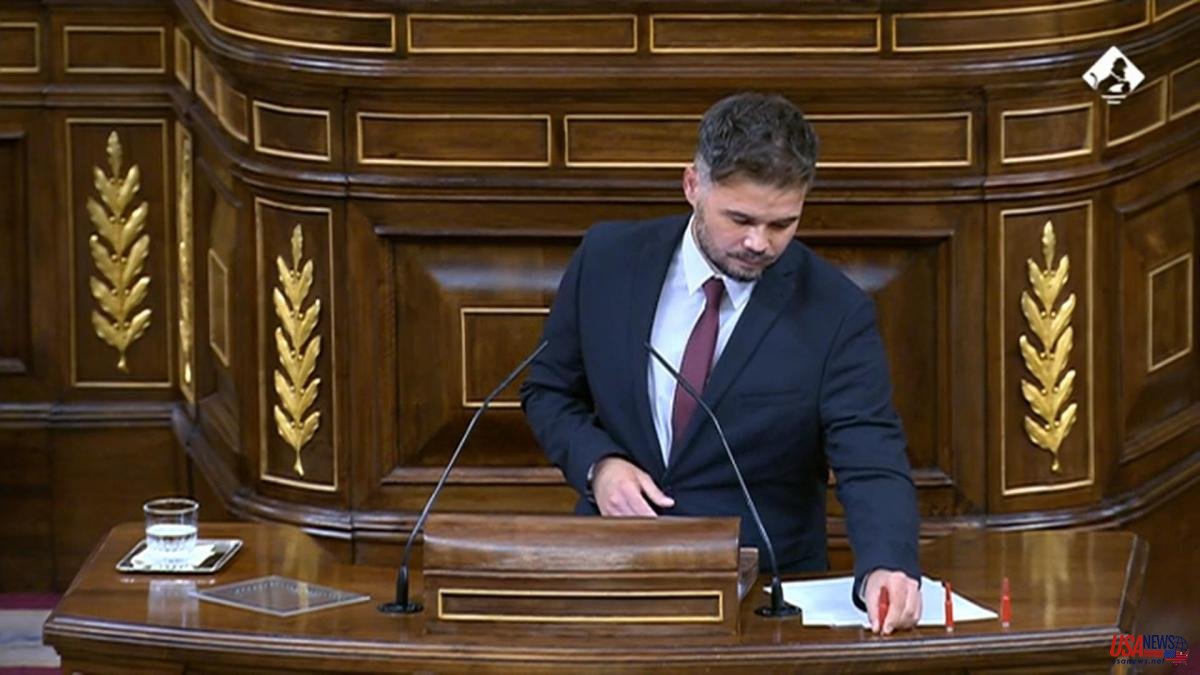 The leader of the ERC parliamentary group in Congress, Gabriel Rufián, has provoked the anger of the Prime Minister Pedro Sánchez by exhibiting three rifle bullets from the lectern of the Lower House with which he wanted to reproach him for the Executive's turn in politics with Morocco. It is this turn that, in the opinion of the deputy, has caused the harshness with which the Moroccan gendarmerie has been used with the migrants who tried to jump the fence with Melilla last June.

It has been a moment of great tension between the two, to the point that the president could be seen reacting from his seat, disapproving of the exhibition that Rufián was making from the gallery.

The Republican deputy was referring to international politics, specifically Ceuta and Melilla: "They cannot react to what is happening in the world, in Ceuta and Melilla, like the rich in a club of rich people who suddenly join the poor" , has reproached the deputy, who has also wanted to show that the Government has not acted the same with African migrants as with those displaced from Ukraine.

Rufián lamented that the government's turn in recognizing the Moroccan proposal on the Sahara is due to the fact that "they needed Morocco as a security guard for the fence". And it was at this point that the parliamentarian took the bullets out of his jacket pocket. "By the way, look, Mr. President: these are the bullets that my colleague picked up on the border with Melilla, with which they killed 37 people. It was the Moroccan gendarmerie. And you said it wasn't that bad," he reproved.

Rufián pointed out that "it is a lie that an extra military effort is required" by Spain, in reference to the agreement with NATO to increase military spending, because our country "is the seventh largest arms exporter in Europe" and "in Spain weapons are sold for 7,300 million a year", Rufián has justified.

The scene has caused the irritation of Sánchez, who has replied harshly to Rufián. But before, the president of the Congress, Meritxell Batet, has also reminded her of the inconvenience of exhibiting objects from the court because "the strength of parliamentarism is the use of the word", she has alleged.

Sánchez has recognized Rufián for his "parliamentary brilliance" on a few occasions, "but today he has made a serious mistake," he told him. "It is an unforgivable mistake to display bullets in this chamber, not even for evidentiary purposes. Congress is not a criminal court," he has reprimanded.

The president has reminded him that "bullets have already entered" Congress, that "they are on the ceilings" of the Chamber and "they were brought by coup plotters", in reference to the 1981 coup d'état. Therefore, "you have made a mistake, Your Honor , he was wrong", Sánchez settled.

In the counter-reply, Rufián has tried to lower the tone by asking the president not to get angry, which was only a parliamentary resource. In fact, once the session was over, the ERC deputy went to the president's seat to comment on the issue.