The ERC spokesman in Congress, Gabriel Rufián, has once again reiterated his apologies for the "inadmissible" words he spoke yesterday, describing the former president of the Generalitat Carles Puigdemont as "moron" for proclaiming independence and has assured that no one has pressured him to do so while he has said he does not know if he will suffer reprisals. 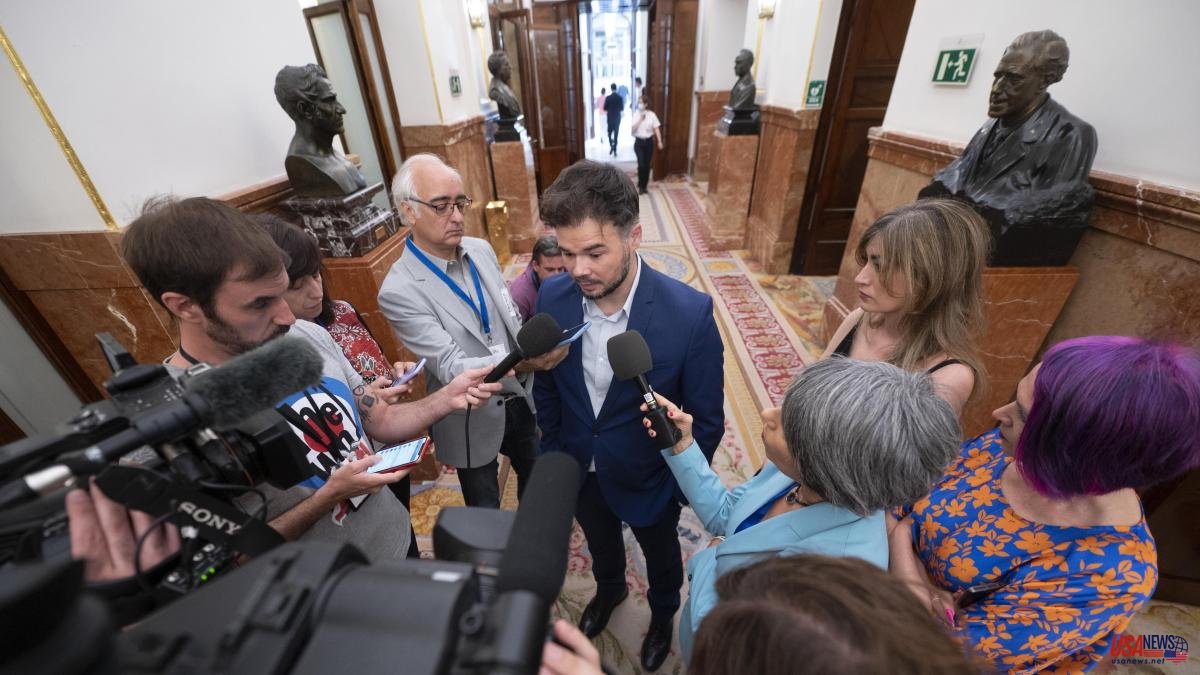 The ERC spokesman in Congress, Gabriel Rufián, has once again reiterated his apologies for the "inadmissible" words he spoke yesterday, describing the former president of the Generalitat Carles Puigdemont as "moron" for proclaiming independence and has assured that no one has pressured him to do so while he has said he does not know if he will suffer reprisals.

"They have not pressured me, I give you my word that they have not," the Republican leader asserted this Thursday in the corridors of Congress after apologizing yesterday afternoon "starting with Puigdemont, Aragonès and Junqueras." "It could be explained in many ways and I have explained it in the worst way," he said yesterday hours after the president of the Generalitat, Pere Aragonès, rejected those words in Parliament and urged his spokesperson in Madrid to correct .

"Those of us who have a microphone in our mouths have a responsibility, to measure our words," Rufián acknowledged on Thursday, admitting that he is wrong every day but that "yesterday's was inadmissible." "I remember that when I saw it I thought you have to go out quickly to ask for forgiveness", insisted the Republican deputy, who at first refused to qualify his words after the host of the TV3 program Planta Baixa offered it to him and later made a tweet in which he he limited himself to clarifying and explaining a "headline taken out of context".

"I was talking about the Spanish mantra that has been saying for 5 years that the independence of Catalonia was proclaimed by a tweet. The idea that it happened because of a tweet and not because of the will of the people is absurd. I'm sorry if I haven't been able to explain myself", Rufián explained in his message.

The tweet to which Rufián alluded is one from October 26, 2017, when it seemed that Puigdemont was going to call elections instead of proclaiming independence, and he published a tweet saying '155 silver coins', which some interpreted as pressure to declare independence. Today, Rufián has insisted that his intention was to "try to counteract the belief" that Twitter "conditions politics" at times as "important" as those Catalonia was experiencing at the time.

"I was enormously wrong," Rufián insisted today, who, asked if he will suffer reprisals for his statements, answered with a laconic "I don't know." "Apologizing is good even if in politics it is a mythological animal," he has said to try to value his apology. "I have talked to many people in the last 24 hours; if it is necessary to talk to anyone and apologize a thousand times more, I will do it because we all make mistakes, and I do it every day and yesterday I did it a lot," he added.

The president of the Generalitat has also taken the opportunity to try to settle the controversy. "It's time to look forward", said the Aragonès after reiterating what was said yesterday in Parliament and verifying that the ERC spokesman in Congress paid attention to him when he demanded a rectification.

Asked if he maintains support for the party's spokesman in Madrid, Aragonès has made it clear that all deputies of his formation have his support and wanted to value the fact that Rufián has apologized, to the extent that in politics he does not usually occur. Likewise, he has pointed out that many times in politics "you end up attacking whoever is closest" and has urged the independence movement to "work on what we share and not on what separates us".

For her part, the leader of the comuns in Parliament, Jéssica Albiach, has assured that Aragonès has given Rufián "for written off". In an interview in Ser Catalunya, Albiach stated that it is a mistake "to think that politics can be done through tweets or occurrences", and explained that within the ERC there is a debate about whether Rufián is the best candidate to represent Republicans in the House.