Rosalía turns New York into the world capital of the 'motomamis'

All tickets sold at Radio City Music Hall (sold out, say the signs next to his photo) and the 6,000 seats are empty. 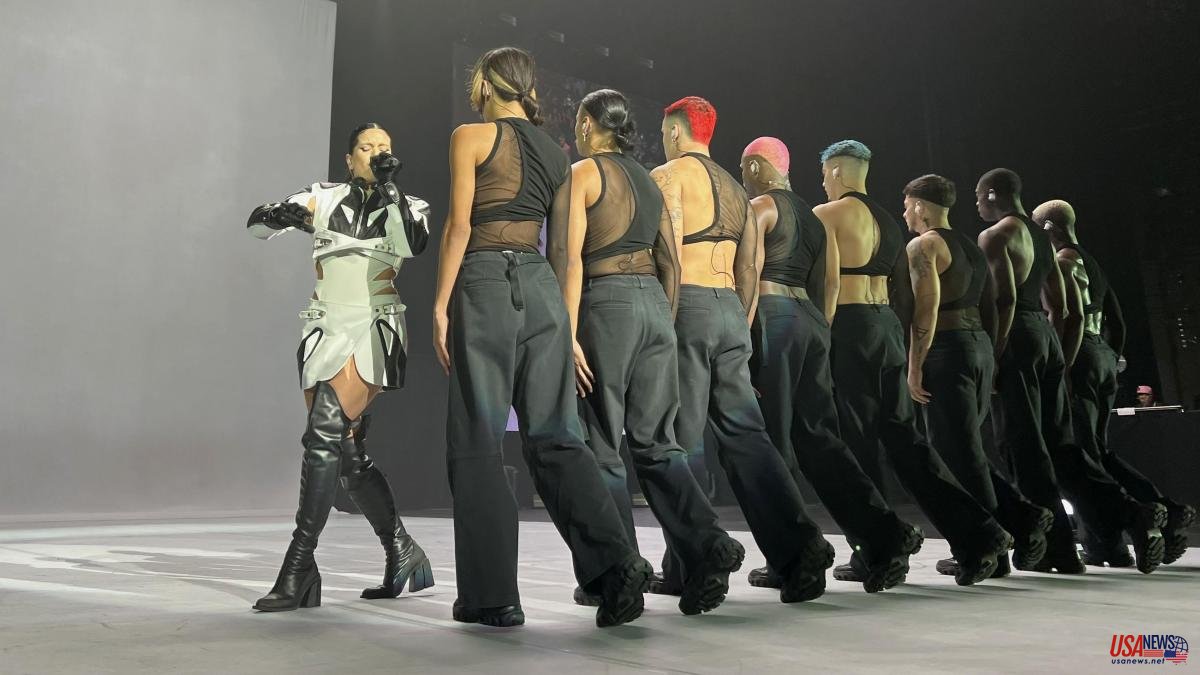 All tickets sold at Radio City Music Hall (sold out, say the signs next to his photo) and the 6,000 seats are empty. A paranormal phenomenon in New York? No, simply the Rosalía effect.

As happens at the beginning of the concerts of the Motomami album tour, as soon as the distorted sounds, engine noise, and the bikers appear with braided helmets that mark the beginning of Saoko, there is not a soul left in the seats, totally forgotten. All standing, from that first moment until the end. The screaming becomes deafening when Rosalía herself takes off her helmet.

-I am very mine, I transform myself.

And the whole room acts as a choir. Absolute tune. You almost have to wonder who doesn't know the lyrics.

"She is very her, her songs really express her life, you have to listen to them in the smallest detail and you feel that it is always her," explains Gayle García, from rows near the stage. She feels passion for the Catalan artist. "She is from another world, a unique voice, very versatile, out of the ordinary," clarifies this young woman, Dominican by origin, who has come from New Jersey and has met with friends who come from different parts of the United States.

“I see myself a lot in her because I am also very much mine,” she adds. And she can't keep talking because she has to sing. She knows them all, from the first note to the last. She and the vast majority of spectators standing up, in a state of euphoria that drags the most sorrowful spirit that can be tonight to happiness.

Follow the established script. Candy, Biscuit (as you like it), Fame… She alone with her voice, canned music, video cameras, two giant screens in the background on which the show is broadcast and eight dancers who support her. At each movement of Rosalía, the public of all sexes and non-sex shudders. There is revelry, especially when a rear wiggle is stuck in the foreground. There are no prejudices.

“How are you New York?” he asks to the delight of the crowd. “I want you to know that I am very happy because it is one of the cities that I like the most and it inspires me and I love it. I've been to New York before, in a smaller place, and being here and seeing all of you is amazing,” she confesses.

He speaks, drawing some chord from the guitar that has been hung up and with which he will later interpret Dolerme. But first he remembers that the Big Apple was one of the cities where Motomami recorded and that in his spare time he went to the Washington Heights neighborhood, north of Manhattan, with a predominantly Latino population.

“I ate a cake”, he joked, listening to music and bought some narrow jeans, “tight, the best ones I have, they are the ones that make your ass so round”, an expression that generates a huge ovation.

Rosalía is everything in music and much more. At her concert, she makes a declaration of principles, in a city that is supposed to be at the forefront of the artistic vanguard, to make it very clear that she is against leverage and that she wants to push boundaries with her music.

In his groundbreaking album El mal Quiero (2018), with which he managed to capture global attention, he mixed flamenco with electronic and pop sounds. His latest work, his Motomami, defies all expectations, as can be felt at Radio City Music Hall, by combining a frenetic cocktail of reggaeton, bolero, jazz, bachata, flamenco, all orchestrated to create an unmistakable sound.

"She's an icon, the best pop star, she's the one making the most experimental pop," says Liam. And that ensures that she does not understand the Spanish language and has to look for a translation. Her boyfriend, TT, defines her like this: “Music, dance and fashion”. The two express her excitement at seeing it live and direct for the first time.

As The New York Times noted when appearing on Motomami, this “Spanish flamenco prodigy has become a multi-genre pop innovator upon the release of her third album.” According to the Times, “success has marked Rosalía as one of the most ambitious and creative sound performers in contemporary pop”.

It is clear this Sunday night, in the first of the two concerts in the Big Apple of her North American tour, which started last Thursday in Boston and that, until October 22, will take her from coast to coast and from Canada to Florida . There has been a storm of praise in the American press, with the Sant Esteve Sesrovires being described as “a doggedly inventive artist who is as meticulous with her visuals as she is with her music”.

There is delirium in one of the most prestigious venues in the city of stages. Only four years have passed and that New York debut at the small but beautiful Joe's Pub, at the 2018 flamenco festival, or its confirmation for the general public at Webster Hall, an international venue, seems very far away.

But the Radio City Music Hall, with capacity for 6,000 spectators and with everything sold out two consecutive days, means playing in the league of the chosen ones, in the Champions of concerts. Nicknamed “The Nation's Showcase,” this theater in the heart of Manhattan is home to the Rockettes and their holiday show that draws viewers from around the world.

Unlike Webster Hall, you no longer need to say “my name is Rosalía” at the start of the show. Everyone knows it, a global collection of fans, many trying to imitate their aesthetic.

-If I say motorcycle, you say…

He unravels the themes of that recent work and that marks this tour. The spectators sing and he does the choreography. “Who has come with company?” she asks. She comes down from the stage, they give her a teddy bear and she dedicates and sings Last night with a couple of girls who are celebrating her first anniversary.

The night advances and the victory is absolute. “How many motomamis are here?” she asks her, and the answer is a clamor.

He reviews the alphabet in his own way and recovers his initial successes, such as Badly (he starts and, feeling his voice out of tune, stops and returns to the beginning, because "New York didn't deserve that") or With height. In this way she leaves the scene, before returning and performing three encores. He says goodbye with CUUUUuuuuuuute and his fans are leaving.

“I used to believe in her, but now I believe so much more, I'm proud to be her fan,” says Ever Franches, who has traveled from Texas. “Of course she has been worth it!” he exclaims. Gayle wants to repeat this Monday.

On the street, Jordi and his daughter Gina are on their way to their hotel. They have come from Barcelona. During the pandemic, confined, Gina had a bad day. She sounded like Rosalía and her father made her a promise. He assured her that as soon as her nightmare was over he would take her to see Rosalía in New York. She has complied as much as she could.

“I celebrate when musicians do something different. We have to evolve, we already had the Beatles and the Stones”, says Jordi. “We have to change. A concert without musicians before would seem like a scam, but it is so. I see that it changes, this is not the concert concept that I was used to. It is something different ”, he emphasizes with admiration towards Rosalía.

“That music is recorded is the paradigm of today. Sometimes it happens, because there are songs that don't even seem like a song, but innovating means risking and also making mistakes to learn”, she adds.

At the mouth of the subway, a group of young people of indefinite sex are singing, “yaki, yaki, chicken teriyaki”. Keep the party going.