There is no doubt anymore, Rosalía is the great phenomenon of pop music or whatever you want to call it because of her chameleonic style, always open to innovation. 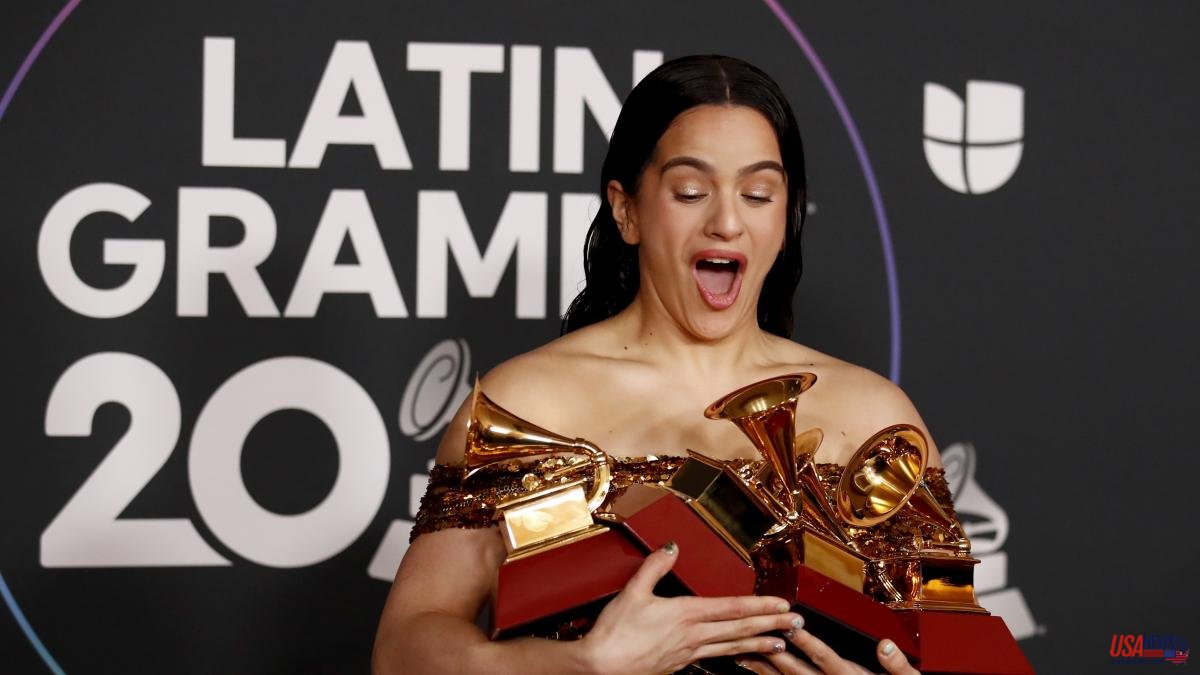 There is no doubt anymore, Rosalía is the great phenomenon of pop music or whatever you want to call it because of her chameleonic style, always open to innovation. Rosalía touched glory this Thursday (Friday morning in her city, Sant Esteve Sesrovires) by winning the Latin Grammy jackpot in Las Vegas. Her album Motomami took the most precious award, album of the year. Once can be luck (she won it in 2019 for El mal querer), but two means consistency.

The Catalan took the stage visibly moved, with tears in her eyes. "Motomami is the album that I have had to fight the most to make, that it has cost me the most to make, but that I pushed forward and that has given me the most joy," she started, amidst shouts of exaltation from the public.

"Thank you for always supporting my music, although my music is always changing, thanks to Latin America for so much inspiration, thanks to my country for continuing to give me love and for not letting me fall and thanks to my family, my team, God, love of my life (addressing Rauw Alejandro, in the front row), I love you,..., and to all those who are behind this album, all tireless, I love you, thank you very much", he concluded in his thanks.

That was his fifth award of an evening (he had nine nominations) in a night in which Jorge Drexler and Ángela Álvarez stood out, who appropriated the show.

The Uruguayan, together with C.Tangana, monopolized six gramophones, the most, with his album Tocarte. Among these, two of the main ones. When he went up to take possession of the award for best recording of the year, he assured that it was something unforeseen.

A few minutes later, after winning the song of the year award, he insisted on the presenter: “Are you sure? I look at the cardboard and saw that yes, it was him. "They don't get the idea of ​​how unexpected this is." And he congratulated "all those who make urban music in Spanish because they have taken Spanish to unexpected corners," she said.

Bad Bunny, the most nominated, in ten categories, lost the top three awards, but took five. And despite this condition of maximum nominee, the Puerto Rican stood up to the party and was not seen at the Michelob ULTRA Arena of the Mandalay Bay hotel in the city of sin.

The baptized as the best night of Latin music had in this 23rd edition a moment of authenticity rarely seen. In the midst of so much tattooing, outlandish poses, Botox, so much stereotype, perhaps so much "plastic" as the great Ruben Blades would say, the gala crowned Ángela Álvarez in the category of best new artist. At 95 years old, she is the oldest nominee and winner in this section.

Picking up her gramophone, shared with Silvana Estrada, who at 25 could well be her great-granddaughter, the veteran novice remembered her daughter Marucha (who died in 1999), "who I know is enjoying that moment and is proud of her mother”, and had words for “those who have not realized their dreams”. She told them: "Although life is difficult, there is always a way out, with faith and love it can be achieved, it is never too late."

He spoke the experience. He wanted to be an artist and his father didn't let him. She then fled Cuba and in the United States she worked hard, never stopping singing the songs that she herself wrote, but only for her family, as her father ordered her to do when she was a teenager. Eight years ago, her grandson, Carlos José Álvarez, a musician by profession, decided to record her songs as her family legacy. And so on until the Latin Grammy.

His story has no more point in common than music with the rest of the winners of the night, all of them musicians by profession and dedication. Carlos Vives, Christina Aguilera, Fito Páez, Sebastián Yatra, Marc Anthony and Christian Nodal were among the winners.

The gala began with a tribute to Mexican singer-songwriter Marco Antonio Solís -chosen as Person of the Year by the Latin Recording Academy- in which artists such as Laura Pausini, Carin Leon or Luis Fonsi participated.