Rivers of death in the Amazon

The boat in which the British journalist Dom Phillips and the Brazilian ethnologist Bruno Araújo Pereira were traveling along the Amazon river had a 40-horsepower outboard motor, 70 liters of fuel and 7 empty drums. 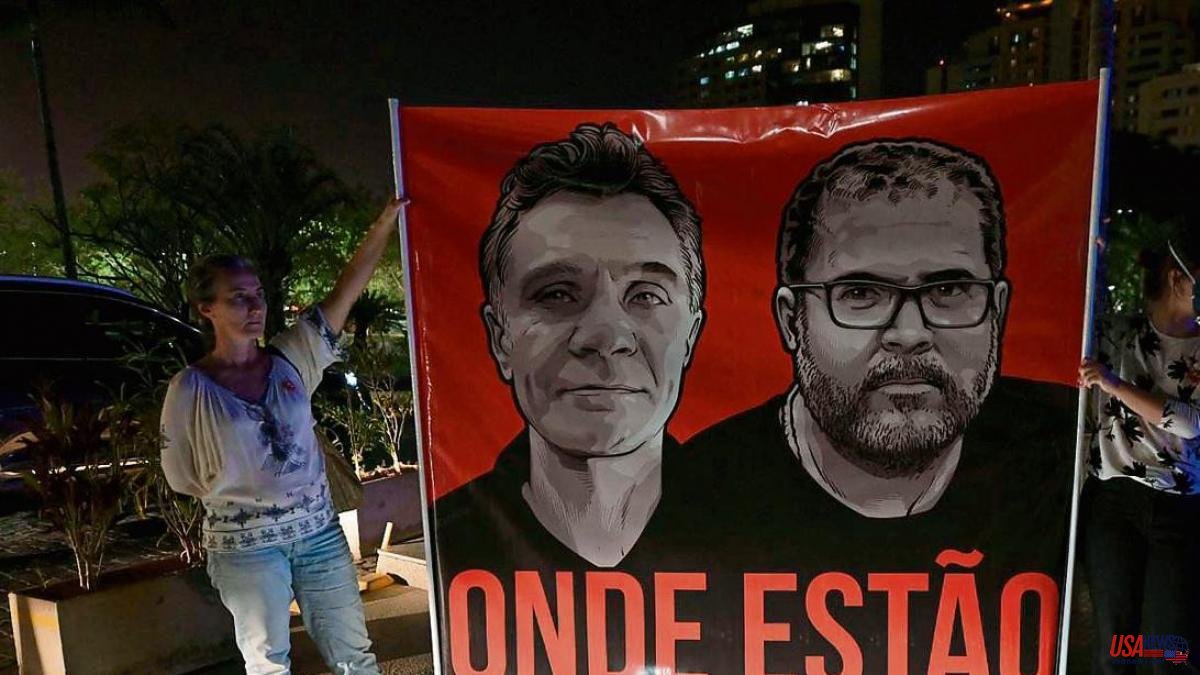 The boat in which the British journalist Dom Phillips and the Brazilian ethnologist Bruno Araújo Pereira were traveling along the Amazon river had a 40-horsepower outboard motor, 70 liters of fuel and 7 empty drums. The one belonging to his alleged murderer, Amarildo da Costa de Oliveira, "El Pelado", a furtive hunter and fisherman, with alleged ties to drug trafficking, was equipped with a 60-horsepower engine.

With this difference in power, it is not difficult to imagine the possible outcome of the persecution that, according to indications, occurred last Sunday due to the meanders of the Itaqui River, a tributary of the Amazon on the border with Peru that gives access to the immense indigenous reserve of Vale do Javari.

Since that day there is no trace of Pereira and Phillips, who were carrying out journalistic investigative work in the area. After detaining Oliveira on Tuesday, Brazilian police found a hunting shotgun with ammunition, a small amount of cocaine and traces of blood in his boat. Several witnesses say they saw Oliveira arm himself and head down the river behind the two investigators.

The worst news to date was given on Friday after a week of searches with military boats, divers and hundreds of indigenous volunteers. Federal police had found "apparently human organic matter" near the municipality of Atalaia do Norte, where the two investigators were headed. Brazilian President Jair Bolsonaro said on Saturday that "parts of a human body appeared floating in the river." A DNA test will be performed to find out if the remains belong to Pereira and Phillips.

There are more reasons to think the worst. Oliveira had threatened Pereira on more than one occasion, a former official of the National Indian Foundation (Funai), a federal institution responsible for looking after the interests of the 254 indigenous ethnic groups in Brazil, most of them in the Amazon. "I want to know if (Pereira) shoots well," he once said, according to witnesses.

Pereira was in the crosshairs of many local criminals after denouncing the constant violent invasions in the Vale do Javari reserve by illegal hunters and fishermen, miners and loggers, many of them armed.

The so-called Triple Border of Brazil, Peru and Colombia is the most lucrative nexus of organized crime in the Amazon jungle. With no roads, the rivers are the main routes for the smuggling of coveted raw materials, from tracajá (river turtle) meat and the huge pirarucú fish, to precious woods, gold and precious stones.

These activities are illegal if they take place within the indigenous territory of Vale do Javari, which stretches across 85,000 square kilometres, almost the same as Portugal, along the border with Peru. “Violence and murders are common,” said a Rio de Janeiro lawyer who has worked with the Marubo in the area. “I have seen cases of people killed by the canvas of a truck.”

In recent years, illegal mining has merged with the drug trade. “Illegal loggers, garimpeiros, fishermen and hunters were always here,” said Antenor Vaz, former head of Funai in Vale do Javari, in a podcast for the Folha de Sao Paulo newspaper. “But since 2019 the narcos of Comando Vermelho have been in charge.”

Pereira and Phillips may have paid the price for interfering with the interests of both groups of criminals. According to an investigation by the newspaper O Globo, it is suspected that a drug kingpin may have commissioned Pereira's murder for investigating the illegal trafficking of meat and fish used to launder money from the drug business.

Bolsonaro provoked outrage by accusing the two disappeared of having gone "on an adventure" by crossing the dangerous rivers of the western Amazon without a police escort. In reality, the comment reveals the weakness of the protection and security system in the Amazon under Bolsonaro. The disappearance "occurs in a context of lack of protection of indigenous lands, dismantling of environmental protection bodies (...) and promotion of hatred against indigenous people, technicians and press professionals," denounced the Dom Paulo Evaristo Arns human rights commission. .

Pereira, 41, a defender of the right of contactless peoples to remain isolated, is an example of what is happening. He was fired from Funai in 2019 in a purge of experts that facilitated the entry of pro-Bolanzanarist evangelicals into the foundation.

Likewise, a police and legal system deprived of resources in such remote areas is a guarantee of impunity for criminals. In 2019, a Funai official was murdered in Tabatinga, 30 kilometers from where Phillips and Pereira disappeared. No one has been tried. Funai's headquarters in Tabatinga have been set on fire eight times since 2019.

Bolsonaro has never hidden his rejection of the demarcation of indigenous territories such as Vale do Javari. Six indigenous ethnic groups live in the reserve, protected -in theory- by the Brazilian constitution. The western Amazon is also home to the world's largest concentration of contactless indigenous peoples. Although these have formal protection, many believe that Bolsonaro's speech and his government authorize invasions and violence.

For Pereira and Phillips, the investigation and denunciation of crime in Vale do Javari, far from being an adventure, was a public service. Phillips, born 57 years ago in Merseyside, England, a contributor to The Guardian newspaper, is the journalist who has published the most exclusives on the environmental and social destruction in the Amazon, whether at the hands of drug traffickers and illegal miners or of big business tycoons. meat or soy industry. His trip down the Itaqui River would have served to finish a book in which he intended to develop a plan to save the Amazon.