Delicate day yesterday to interview one of the great active Italian conductors. 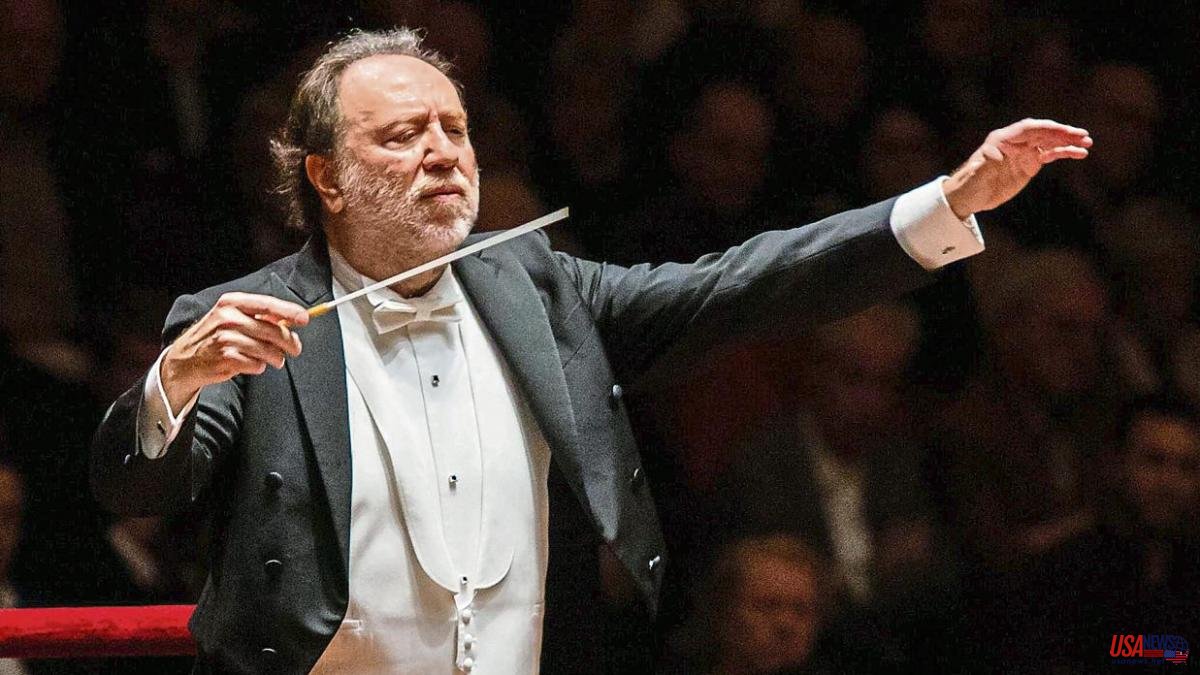 Delicate day yesterday to interview one of the great active Italian conductors. Riccardo Chailly (Milan, 1953) refused from the start to comment with La Vanguardia on the effects that the arrival of the extreme right to power could have on the culture in his country after the results of Sunday's elections. “Let's talk about music. I want to talk about Beethoven and Mahler”, he cut short.

The musical director of the Scala in Milan –since 2015– is about to embark on a small tour of Spain with the theater Philharmonic. They inaugurate the seasons of the Alicante auditorium (October 1), the Nacional de Madrid (day 2), and the Palau de la Música Catalana (day 3).

In his opinion, the needs of the Scala are well covered from the governmental point of view. "We have support and Dominique Meyer, the mayor, works in this direction, so that we can guarantee an intense and rich season."

Could that balance be endangered by the arrival of the extreme right?

I don't think it affects things, things have been going as they should at La Scala for a long time.

Let's talk about the program that he brings to Spain: Beethoven's 1st Symphony and Mahler's 1st.

This combination is a sign of rupture of the prevailing system. Beethoven composed his in 1899 and 1900 and Mahler did so between 1884-1888, both around the turn of the century. Each one has its particular dominant breaking character. Beethoven started with a dominant seventh chord and a pizzicato that used to be a way to end a harmony, never to start it. And Mahler's 1st begins entirely differently, with a long C that lasts 61 bars. Something inconceivable. The idea of ​​both geniuses began a journey that at that time was not revealed to anyone: in the case of Beethoven it reaches the 9th and in Mahler's up to the 10th, which I consider finished and a great symphonic work. How can you imagine that from that dominant seventh of Beethoven's 1st we would reach the Finale of the 9th! And it's the same with Mahler, from that incredible high C-sharp... to the 10th Adagio harmony tones, which are actually not nine tones but a superposition of nine peaks. In both cases we are facing a revolution.

Mahler is invariably scheduled to open this season... Why would you say there is such a need for Mahler?

It is the achievement after a long road that began in Mahler's time, when he was constantly misunderstood and belittled. A very painful path until the 8th: when he directs it in 1910 in Munich, it is his first success. In the 1960s, Mahler appeared more and more on symphony programs. And we owe it to a few directors who are crucial: Willem Mengelberg in Amsterdam, followed by Bernard Haitink; in Italy Claudio Abbado and in America Bernstein, but before him, Dimitri Mitropoulos. And universally Bruno Walter. These were figures that introduced Mahler to our century. And thanks to them we enjoy him as the most famous composer right now in the symphonic repertoire, who we put together with Beethoven because there is no reason not to. And that is important, because it has taken half a century of progress in Europe.

You assured that your generation has had an advantage with Mahler compared to the previous ones because they have developed a technique. What technique is that?

Being Claudio Abbado's assistant at La Scala, in my youth, and when he brought Mahler's integral to Milan, I had the privilege of being there assisting, and he showed me his brave technique, skill, which requires the complexity of that music. .

You are the second person to have performed the integral at La Scala.

Over five seasons, yes. This one we will play the 8th and the next one, the last two. It requires a great deal of work every time, even though Gustav Mahler is now in the Scala repertoire, but even so...

He also learned a lot from the way Karajan rehearsed Mahler...

I was able to talk to him privately and obviously the conversation turned to Mahler, because at that time I was starting my period at the head of the Berlin Radio Symphony and we started with the 10th. I assisted Karajan in the 6th and 9th, and I was impressed not only with the level of interpretation but the depth of his vision, and this despite having come to Mahler very late, compared to his experience with Bruckner, Beethoven or Brahms. Karajan was always ready to talk about what he hadn't directed: in this case, the 10th.

In Italy it has been the opera houses themselves that have provided orchestras dedicated to symphonism. Does it have advantages?

Well, the Filarmonica della Scala was created by Abbado in 1984 so that in Italy there would be something like the Vienna Philharmonic, which almost every night plays opera at the Staastoper. They changed the name from the Scala Theater Orchestra to the Scala Philharmonic and the musicians are self-governing. Since then I have conducted it as a guest in the symphonic repertoire and when I finished my period conducting in Leipzig and Amsterdam, I also took up the baton in operas, in the Scala pit.

In Mahler's case, this situation works like a mirror, since he was an incredible opera director, whether in Hamburg, Vienna... at the Met in New York. He absorbed the gigantic repertoire of operas, from Mozart to Wagner. And, like it or not, it is reflected in his music. And in flexibility, because it is an art linked to the art of singing, which depends on the ability to breathe quickly. Hence, in Mahler you have the culture of the caesura: he wrote very clearly those commas in his scores, which imply that the sound stops and the whole orchestra has to breathe in unison in a second. That is a sign of how the director has developed the study of him. Mahler requires that culture of commas. And in the exercise of interpreting all his symphonies, the moments in which you have to generate a silence, an oxygen for the singers to breathe, are very important dramatically in Mahler.

Do we need more perspective or does contemporary music already speak of the political times we live in?

Every era has its political events and there are compositions tied to them. The paradigmatic example is the difficult position of Shostakovich living in Russia. But that is something that we will see in the future, when the results of the political changes are seen.

There are no Italian composers who are anticipating anything nowadays, then.

The importance of music is always based mainly on quality, it is not linked to political moments. And that is proven by geniuses of Italian music like Giacomo Puccini who lived in a complicated time, but what remains forever is the quality of his music.

His father, Luciano Chailly, an opera composer, fascinated by Russian literature or Pirandello, directed the programming of RAI and also Scala. Was politics discussed at home when you were young?

Music is a moment of abstraction, it has the gift of also inspiring the irrational side of human beings. It goes beyond the rational, and that is one of the great meanings when you go to a concert. It is the possibility of emerging yourself in the sound universe in one piece. And the program that we bring to Spain with Beethoven and Mahler gives you the opportunity, in totally opposite styles, to get there.

La Scala was the first theater to cancel the director of the Mariinski, Valery Gergiev, when the war in Ukraine broke out. Do you think it should have happened differently?

It was a very difficult time, and it still is. A very sad situation that has not been clarified, the war continues. We can only ask for it to end and hope that peace will come soon. It's lasting too long and it only creates divisions. It's not what we need

Would you take a plane to see someone in particular direct one of the new generations of teachers?

You see, I'm getting old and I started directing at 14, which means I've been lucky enough to listen to all the great directors of half a century. I've been very spoiled in this regard, I've been lucky. And he left the young generation the chance to surprise us with quality. I wish it.

The last thing he has recorded with the Scala Philharmonic and the Decca label is a cd Mendelssohn, Schubert, Mozart, and before that Cherubini and Respighi. What's the plan?

Well, make the old composers of the Italian tradition and also great composers who were inspired by Italy. One is Mendelssohn, and also Mozart, with his three splendid Overtures to operas that he wrote for Milan. And Schubert's Italianate Overtures, which are an unofficial dedication to Rossini.

He hadn't come to the Palau de la Música for a decade...

Yes, the last time I think it was with the Gewandhaus. I remember the audience, because I also came during my previous period in the Concertgebouw Orchestra and I have to say that I love making music in this hall, so historic and with impressive acoustics.