Officials from the Canadian Coast Guard said that Sunday's fire at a cargo ship off British Columbia's coast appeared out. 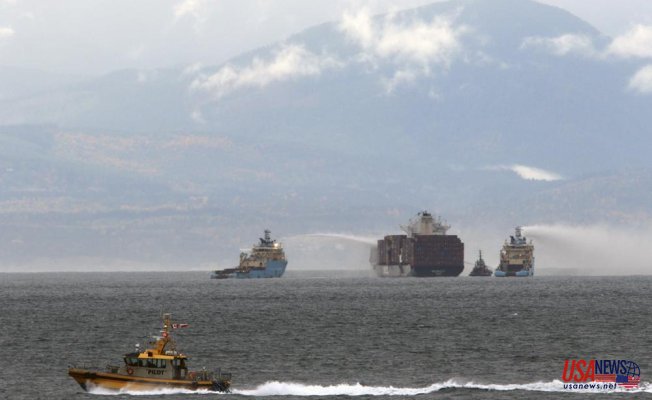 Coast Guard received information late Saturday morning from the Coast Guard that there was a fire at the MV Zim Kingston. The vessel is currently anchored five miles away from Victoria. Two of the containers were containing hazardous material, identified as potassium amylxanthate.

JJ Brickett (federal incident commander for the Canadian Coast Guard) stated that the majority of the fire was out during a Sunday teleconference. It is still smoldering.

Coast Guard stated that the dangerous material contained in the containers made it impossible for the crew to spray cold water directly onto the fire. The emergency zone was now two nautical miles from the Zim Kingston.

Brickett stated that it was a "really good sign" that adjacent containers were not scorched or charred.

He said that "Presumably, everything in those containers has been consumed or melted by the fire." "The fire is still burning and we are cooling on both sides."

The Joint Rescue and Coordination Centre Victoria reported that 16 crew members were safely removed from the ship while five other crewmembers, including the captain, remained aboard at their discretion.

Coast guard officials reported that a Vancouver-based hazardous materials crew was on the move and that the Zim Kingston owner had hired the U.S.-based Resolve Marine Group to salvage the containers. This included firefighting.

Danaos Shipping Co., which manages the container vessel, stated in an earlier email: "No injuries were reported." The fire appears to be under control.

Brickett stated that the U.S. Coast Guard sent a tracking buoy to track 40 containers that were lost from the Zim Kingston in rough waters on Friday. On Sunday, the containers were located 27 nautical miles offshore of Vancouver Island.

Brickett stated that two of the containers contained "materials we would worry about", but added that none of his trajectories currently have any containers groundeding.

Authorities stated that efforts to retrieve the containers could not begin until after a break in a storm, which was expected to worsen on Monday.

Brickett stated that the ship's owners were "very responsible" and had acted correctly in hiring the necessary resources. He said it was too early to determine the cause of the fire, or whether the containers that fell overboard were involved.

He stated, "Our first priority should be to stabilize the scene and put out the flames."