The young crew of the German Red Bandit confirmed on the last day the great performance they had throughout the regatta week of the 40th edition of the Copa del Rey Mapfre and deservedly won the prestigious Real Club Náutico de Palma trophy in the ORC1 class. 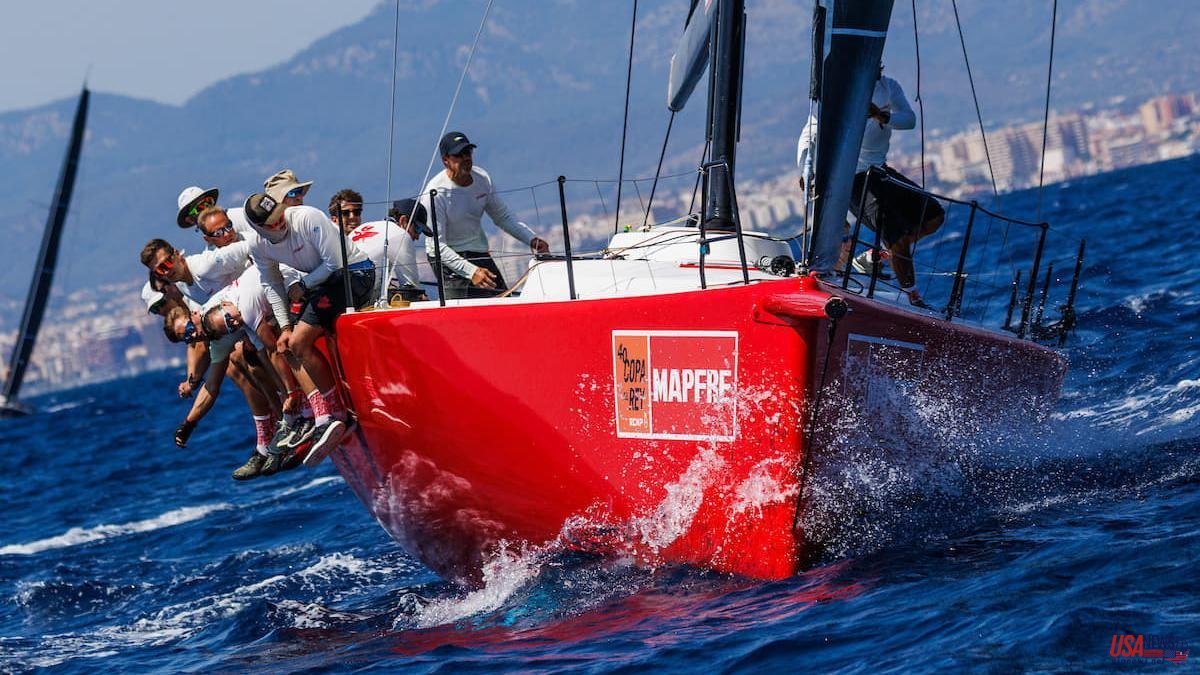 The young crew of the German Red Bandit confirmed on the last day the great performance they had throughout the regatta week of the 40th edition of the Copa del Rey Mapfre and deservedly won the prestigious Real Club Náutico de Palma trophy in the ORC1 class.

The TP52 Red Bandit is crewed by a group of young sailors from the Bayerischer Yacht Club, the oldest and largest yacht club in southern Germany. It is the focal point of a project put together by the experienced sailor Carl-Peter Forster that aims to introduce the young sailors of this club, based on Lake Starnberger, 25 km southwest of Munich, to ocean sailing and provide them with the way to develop your skills on large boats at a high competitive level.

In this Copa del Rey Mapfre the team has shone at a great height, turning into a spectacle, from the first day, the energy and precision with which they applied themselves in the maneuvers.

Second on the podium was the Argentine Swan 45 From Now On, which repeats the position of the 2021 edition of the Copa del Rey Mapfre. And third, the Estrella Damm, skippered by Luis Martínez Doreste, thus confirming his victory in the particular battle with HM Hospitales and Palibex, the three DK46 models that took part in this competition.

The Aifos finished fifth overall in the ORC1 class and King Felipe VI bid farewell to the 40th edition. anniversary with a brilliant victory in the only regatta that was held this Saturday.

In ORC2, Javier Banderas' Teatro Soho Caixabank, with Daniel Cuevas at the helm and Luis Doreste as tactician, confirmed the impressive level the team has reached. The second position went to Rivareno Gelato - Elena Nova, owned by Christian Plum and Javier Sanz, the president of the Royal Spanish Sailing Federation, who managed to get ahead of Katarina II owned by Estonian Aivar Tuulberg, whom he sent to third position.

In the Swan 50, Barcelona's Pablo Garriga's Tenaz, who leads Toño Piris as tactician and Alicia Ageno as navigator, finished fourth. The class entered the final battle with two clear contenders for the title: Marcus Brennecke's Hatari, who had taken the provisional lead for the first time the previous day, and Stefan Heidenreich's OneGroup, who led the provisional three out of four days. previous games and came to the last duel four points behind their rival. After OneGroup went offline in the last outing of the championship, it was enough for Hatari to cover his rival and score his worst partial of the week (11) to become the new champion of the 40th Copa del Rey MAPFRE.

The winner of ClubSwan 42 was Pedro Vaquer's Nadir. The newly proclaimed world champion of the class built on his victory with excellent progress throughout the week. The Majorcan boat, which has Rayco Tabares from the Canary Islands as its tactic, finished the Preliminary Series in fifth position, prevailing in a three-way duel with Mirko Bargolini's Koyré – Spirit of Nerina and José María Meseguer's Pez de Abril, who finished the regatta in that order.

At ClubSwan 36, Lorenzo Monzo's Italian Farstar started out as the leader for the fifth day in a row, two points ahead of 2021 champion Giangiacomo Serena's Monegasque G Spot. The victory was resolved in a dramatic final set, in which the defender of the title knew how to play his cards to score a valuable second that was equivalent to raising his second consecutive Cup. After 11 sets, the champion led his immediate rival by just one point, the tightest lead in this edition. Turkish Facing Future by Mehmet Taki finished third, with the tactics of the Basque Olympic champion Iker Martínez.

In the Women's Cup, the trophy went to Maria Bover's Balearia, from the RCNP, who imposed their regularity on Natalia Via-Dufresne's Dorsia Coviran, silver medalist at the Olympics. of Barcelona '92.

The J70 won Gustavo Martínez Doreste, while his brother Jorge was third. Thus, the four Doreste, members of an essential family in the history of Spanish sailing, have finished on the podium of the three classes in which they participated in the 40th edition of the Copa del Rey Mapfre.