It could go down in history as the opera that brought a neighborhood together. 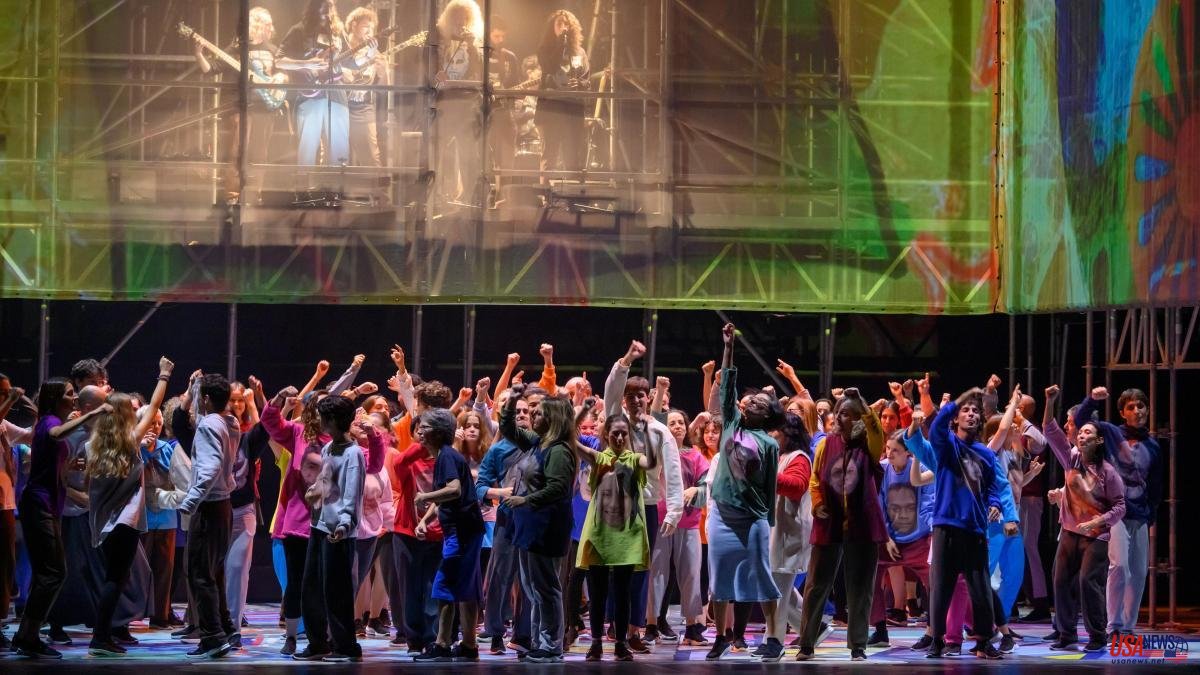 It could go down in history as the opera that brought a neighborhood together. Or like the one that liquidated the fourth wall, because above and below the Liceu stage everyone came from the Raval this Wednesday night, and he knew very well what fiber he was struck by the score by Arnau Tordera and the libretto by Victòria Spunzberg. Sheltered by music, vocal registers and diverse clothing, that unclassifiable La gata perduda emerged, the community opera of the Liceu.

"Well, the neighbor pushes me a lot. We are the geeent, we are from the Ravaaaal" (...) "I carry within me the great tribal beat". Or there where an immigrant's sob was heard: "To die far away is to die twice..."

The melodic chorus is very welcome in a musical. And when the choir is that authentic –300 neighbors well directed and used on stage– and the orchestration is as good as the orchestra itself –the students of the Conservatori del Liceu directed by Alfons Reverté are brilliant–, the chorus is usually the emotional highlight.

Even the Los Angeles Times correspondent who walked through the Liceu last night –and who got away halfway because the thing promised to last three hours (the applause lasted twenty minutes!)– could describe this as the night in which the reality did not exceed fiction or quite the opposite, rather it was intertwined with it so that a couple of thousand people felt particularly vindicated: the sale of the stalls and parts of the first and second floors had been reserved for the neighborhood public, all at single price of 20 euros.

During the intermission, the Saló dels Miralls breathed the happiest and most relaxed atmosphere of the last... 175 years? A group of veiled women took not a selfie but a group photo, like those of yesteryear. Others with gypsy strength returned to their seats radiant, explaining that yes, this opera speaks of their neighborhood and it is wonderful, “because it does not forget the cry of the Raval is not for sale, the Raval defends itself”.

Down with gentrification, yes, although this word was spared by the skillful Spunzberg, who did tear up the public with her literal idea of ​​a camel that removes its snout to sell costs in the neighborhood, or with its joke at the expense of the “manager cultural with social empathy”... that “program with devotion”.

From the side of the amphitheater, President Pere Aragonés or the Minister of Culture, Natàlia Garriga, could be seen, with the face of being aware of the power of culture as a tool for mutual understanding and social cohesion. Especially when on stage there are 41 nationalities that come together in the Raval. For one day, the opera at the Liceu was really useful in the eyes of politicians.

The Minister of Equality and Feminism, Tània Verge, as well as the Secretary General of Government Culture, Jordi Foz, plus the Secretary General of Objetivos y Políticas de Inclusión y Previsión Social, Milagros Paniagua, also attended. Or the councilor and manager of Ciutat Vella, Jordi Rabassa and Yolanda Hernández. The president of ERC, Ernest Maragall, nor the deputy mayor Albert Batlle or councilors Gemma Sendra and Neus Munté were not missing.

There were also representatives of cultural entities, such as Jordi Cuixart, for Òmnium Cultural, or the consul of the Philippines, Maria Theresa S. M. Lazaro. And Oscar Esteban himself, president and director of Tot Raval; Lluis Cabrera, founder of Taller de Músics, and Àngels Margarit, director of Mercat de les Flors. Oh, and there were well-known faces such as the television presenter, Raquel Sans, and the already omnipresent Judith Mascó, whose absence in such a socially significant cultural event would have been noticed as much as that of the mayoress Ada Colau... who has planned attend the function on Friday.

The neighborhood had dawned as the dark and stigmatized side of the city and he went to bed transformed into the coolest and brightest. Its people carried the torch in their hearts... They had kept it warm throughout the opera, and rekindled it in the final 20 minutes of applause... It's what happens when hundreds of colleagues and relatives come out to say hello.