Possibly the thousands of people who pack the RCD Espanyol stadium this Saturday night had never been there before, and that is what it is all about. 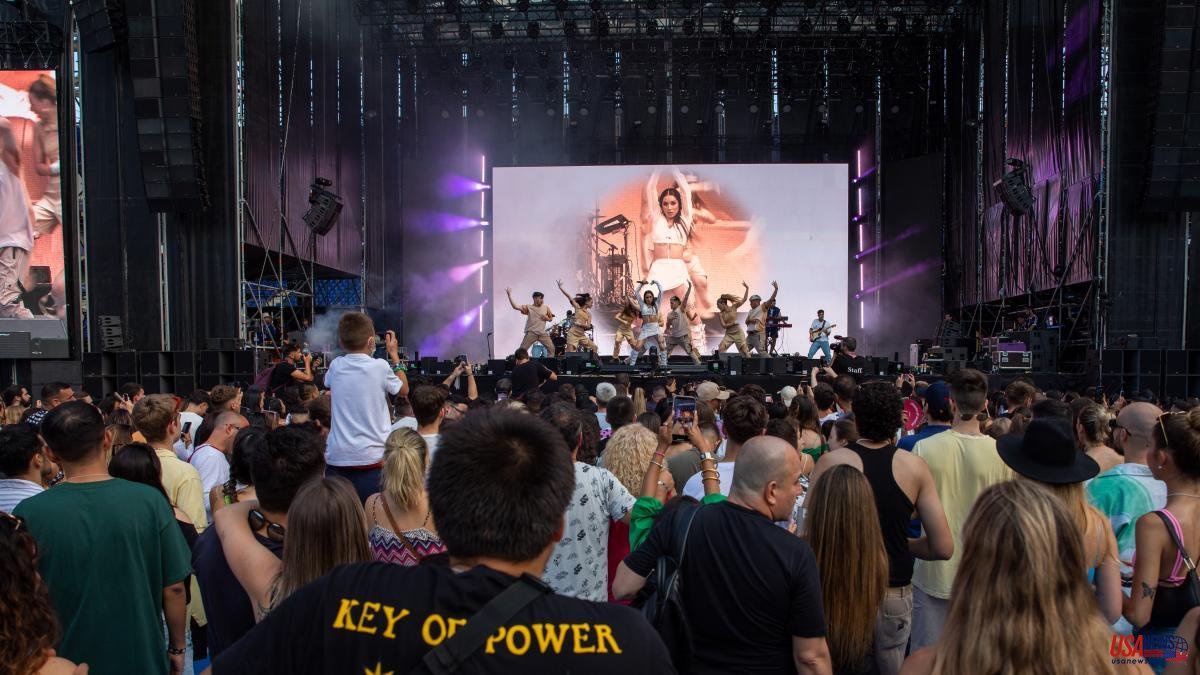 Possibly the thousands of people who pack the RCD Espanyol stadium this Saturday night had never been there before, and that is what it is all about. Because the Cornellà-El Prat venue hosts this Saturday the first Oh My Goal festival, organized precisely by the Spanish Football League in collaboration with the company Never Say Never (NSN), sponsored by former Barça footballer Andrés Iniesta, and which Above all, it aims to attract the public of other classes and environments to the field (and the venues) of football.

This Saturday, young people, with a certain majority of girls, attracted by some of the biggest idols in Latin music. Average? Maybe 18 or 20 years. More than 23,000 people have packed the stands and grass of the field.

The day started with Juan Magán, continued with the Argentines María Becerra and Bizarrap, with the Puerto Rican Rauw Alejandro, who appeared on stage at exactly 10:44 p.m., to the fervor of the audience, absolutely dedicated and plans to close with the North American DJ Steve Aoki, another world reference on set. Initially, the presence of Ana Mena was also planned, but she was on sick leave.

Involuntary protagonist has been the communicator Ibai Llanos, friend of Bizarrap, recognized -and massively greeted- by ​​the attending public.

This is the first Oh My Gol festival, which La Liga has granted to NSN for three editions, with the aim of "merging football with other kinds of entertainment", sources from the organization explain, "with the idea of ​​generating new audiences" . In the intervals between artists, the two large screens that flank the stage offer images of some of the best moments of the recently concluded league (Correa's goal against Villarreal, from midfield, is truly spectacular).

Rauw Alejandro is at a peak not only musically, but also because of his relationship with Rosalía, the global star who was expected tonight in the VIP area of ​​the field.

Son of a guitarist and backing vocalist, Rauw Alejandro is the star of the night. He rose to international fame in 2018, although his first album -Afrodisiaco- was not published until just two years ago, with collaborations from Anuel AA, J Balvin, Zion

One of the implicit protagonists of the night is Gerard Piqué -so hated in this stadium, precisely-, given that Rauw Alejandro sings one of the great hits, "Te congratulations", in a low voice with Shakira, of which the former Blaugrana just separated. "I congratulate you" he says "That show looks good on you / I congratulate you, how well you act / I don't buy that cheap philosophy / I'm sorry, I don't ride that motorcycle anymore / I can't stand two-faced people / I put the hands on fire for you / And you treat me like one more of your cravings / Your wound did not open my skin, but my eyes did / They are red from crying so much for you / And now it turns out that you feel it”, arguments that the networks , that worn out beer, they consider a subliminal attack against the footballer.

The festival has kicked off with Barcelonan Juan Magán, who is considered the creator of the first reggaeton group in these parts. That was in the year 2000. A decade later, and after his time as a DJ on the program "Fama, a baile!", he began as a soloist. With enormous success: he has had five Latin Grammy nominations and six Billboard nominations in the Latin category and has collaborated with people like Pitbull, Don Omar, Paulina Rubio or Enrique Iglesias.

Later, a double dose of Argentina, with María Becerra, and Bizarrap. The first is today just 22 years old and has been in the creation for seven years. At 15, she began uploading videos to YouTube and had three million members: she entered the list of the most influential in Argentina. He debuted with an EP album, titled 222, just three years ago, in 2019. Some of the songs from that work will have been played this Saturday in Barcelona: "Tu Lady", "Nada de amor" and "Díme como hace" .

Becerra already knows the star of the night: she takes part in the song "En tu cuerpo (Remix)", originally by Lyanno, which she performs together with Rauw Alejandro and Lenny Tavárez.

Also from YouTube comes Bizarrap, the alias of Gonzalo Julián Conde, born in August 1998. He began his career in 2017, with what he called “crazy combos”, videos that he uploaded to his channel and where he offered his freestyle mastery. He was also named for all of this at the Latin Grammys, in this case in 2021, and for four categories. He has collaborated with rappers like Duki, of course better known in Argentina than here, and Nicki Nicole, Nathy Peluso, Residente, or Paulo Londra, among others. Today he has more than 17 million monthly views on Spotify. One of the first 300 in the world. His lyrics have been massively chanted by the public, who warmed up engines for the great star of the day.

Both on stage and on the lawn -well protected by plates- a colossal spectacle.