Raphinha: "If we win the Champions League, I'll walk through the Camp Nou on my knees"

Raphael Dias Belloli (Porto Alegre, 1996) was born in La Restinga, one of the most humble neighborhoods in this Brazilian city. 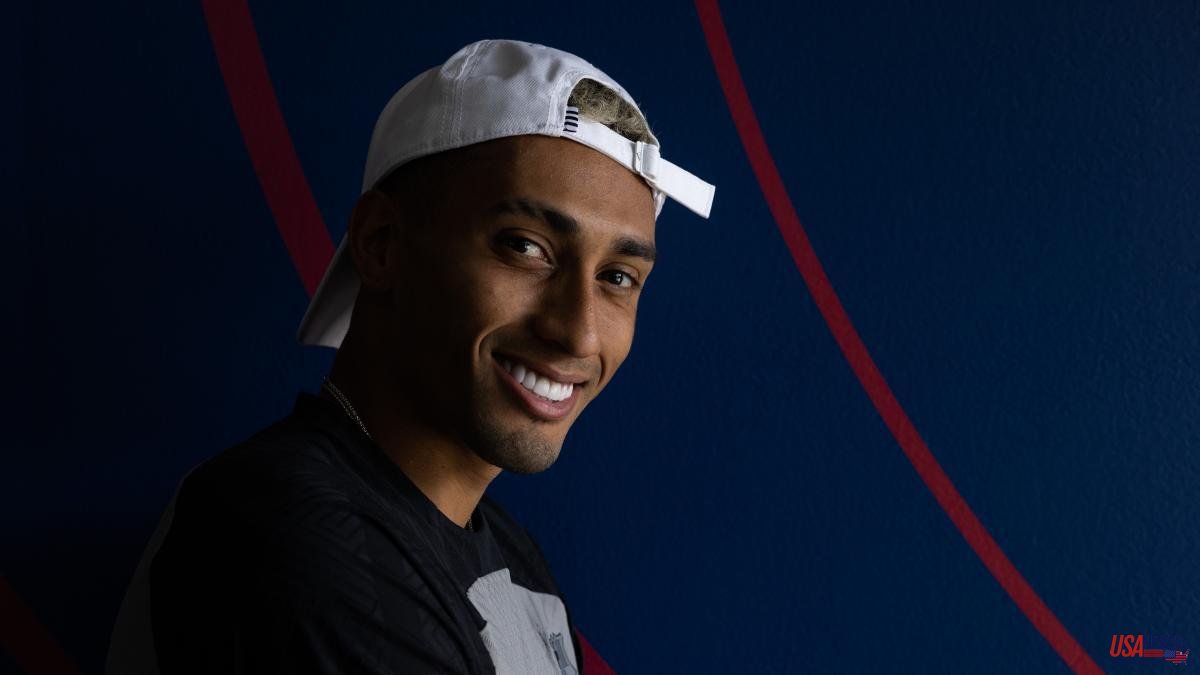 Raphael Dias Belloli (Porto Alegre, 1996) was born in La Restinga, one of the most humble neighborhoods in this Brazilian city. While he grew up with a ball at his feet earning the nickname Raphinha, his mother Liz worked in a nursery school canteen and his father Maninho earned a salary with the music of the Samba Tri group, which Ronaldinho sponsored. The influence of the Brazilian with the eternal smile was key for him to opt for Barça this summer after learning a lot at Leeds de Bielsa. With a smile reminiscent of his idol, Raphinha attends La Vanguardia before the team travels to Cádiz. He sees himself winning it all.

What has surprised you the most about the club?

Without a doubt, the warmth of the fans, the coaching staff and the players. They are all good people, always looking to help newcomers.

He turned down a very attractive offer to go to Chelsea...

Yes, because my dream was to wear the Barcelona shirt, which is a club that I have followed since I was very young. Since Ronaldinho arrived. With him I began to understand a little more the history of the club. I wanted to be a part of this. So that dream, those desires were stronger than any other proposal no matter how powerful it was financially.

Has Ronaldinho congratulated you?

Ronnie congratulated me through my father. Yes, I talk a lot with Neymar. He told me that if he came here he would not regret it. He is right.

What has Xavi asked of him?

He called me when I had practically decided to come. I ended up even more excited. He asks me what he was already doing in Leeds but with more tactics and without fear of finishing plays. He also teaches me to know what I have to do technically and tactically to help the team both offensively and defensively.

What influence has Deco, your agent and club employee, had?

Deco speaks highly of Barça and the things he has experienced here. But as an agent he is very neutral on these issues. He analyzes the advantages and disadvantages of each decision you make, but it is the player who decides where to go.

Were you aware of the complicated economic situation that Barça is experiencing?

Yes. I knew that I might have some difficulties to come and to be registered. But he was also aware of the effort the club was making. So I decided to trust and adapt to the economic conditions that existed.

How do you manage the season with a World Cup?

It will be a different World Cup because it falls in the middle of the season. But I think that precisely for that physically and technically he will be one of the best in the world. That it is in the middle of the season, it is true that it causes you to pay a little more attention to it. But we have to keep our heads at the club until the last game and get it back afterwards. I'm personally nervous, but also ready to go. We have options to win the World Cup with Brazil.

President Laporta said that you brought back the Brazilian samba. Do you play the music?

Ansu Fati is in charge of that. But I have managed to get him to play more Brazilian music. I am proud of that management (laughs).

Who do you get along with better?

My colleagues received me very well and have helped me to adapt as best as possible. I speak with everyone, but above all with Ansu Fati and Ronald Araújo.

You have learned from Bielsa at Leeds and now from Xavi. Are they very different?

Bielsa's style is very peculiar, but he is always very respectful with the ball. Xavi is different, especially in the way he manages the team.

Are you referring to meritocracy?

Yes. He repeats that message a lot. We know that any player can be a starter. The game against Viktoria was an example.

So competition is the key?

Definitely. I think that to form a winning team we have to have the highest level of competition possible. But always being loyal and good companions.

He is a great footballer. We all already knew. But when you are with him you see that he is much more than a leader. We also have the talent of Dembélé, Ansu Fati, Ferran Torres, Memphis... they all have immense quality and anyone who plays will give great results.

How is Ansu Fati now?

All football players have ups and downs. One may be going through a moment that is not as good as he would have imagined, but it is a matter of adapting, putting his head down and seeing that the team is having great games. This helps you gain confidence, score goals and provide assists. I see Ansu getting better and better.

There are two captains, Alba and Piqué, who are not having as much prominence this course...

I think being a captain doesn't just mean always playing and wearing the armband. It also means helping and sending positive messages to give confidence to the team. They comply with everything. They are great players and great captains on and off the pitch.

What will he do if Barça win the Champions League?

The same thing I did with Leeds when we managed to secure permanence. I will cross the Camp Nou on my knees or in the field where we meet. It could very well be Istanbul.

Can you win the Champions?

Of course. Apart from the talent that the team has, I think the most important thing is to have a winning mentality. And we have it.

How is Raphinha in her free time?

I like above all to be with my family, with my wife, my parents when they come and my brothers. I also enjoy walking, walking my dog ​​and watching movies of all kinds.

Is it difficult for you to manage popularity?

I am a footballer but I have been in the place of the fan. I have asked for autographs, I have asked for photos and now whenever I can I stop to sign myself. It is always very gratifying to see that you are well received. You must also accept that you cannot have a normal life, but I try to adapt and do things in the best way so that I am not always inside the house as if I were a prisoner.

Does the footballer live on another planet?

I do not think so. But it's hard for people to understand that we're also wrong or that we need to clear our heads. That we also want to go out to dinner with the family. It may seem like we live in another world because many times you stay home to avoid being judged.

tell me about your childhood

I was born in La Restinga, a very poor neighborhood in Porto Alegre. I had a very poor childhood, so to speak. But my family taught me that humility and values ​​are much more important than material things and that has saved me on many occasions. That's why I always try to pass on all the good things I receive.

And since when do you do it with a ball at your feet?

Football has always been part of my life. My father and my uncle had been outstanding players in the region and they breathed football, and that is contagious and lives. I have photos of me when I was four years old and with a ball. My family says that I was always playing soccer in the street, at school or in city clubs.