Rafael Reig (Cangas de Onís, 1963) arrives from the town, Cercedilla, on a bus, wearing a straw hat and leaning on a hazelnut cane. 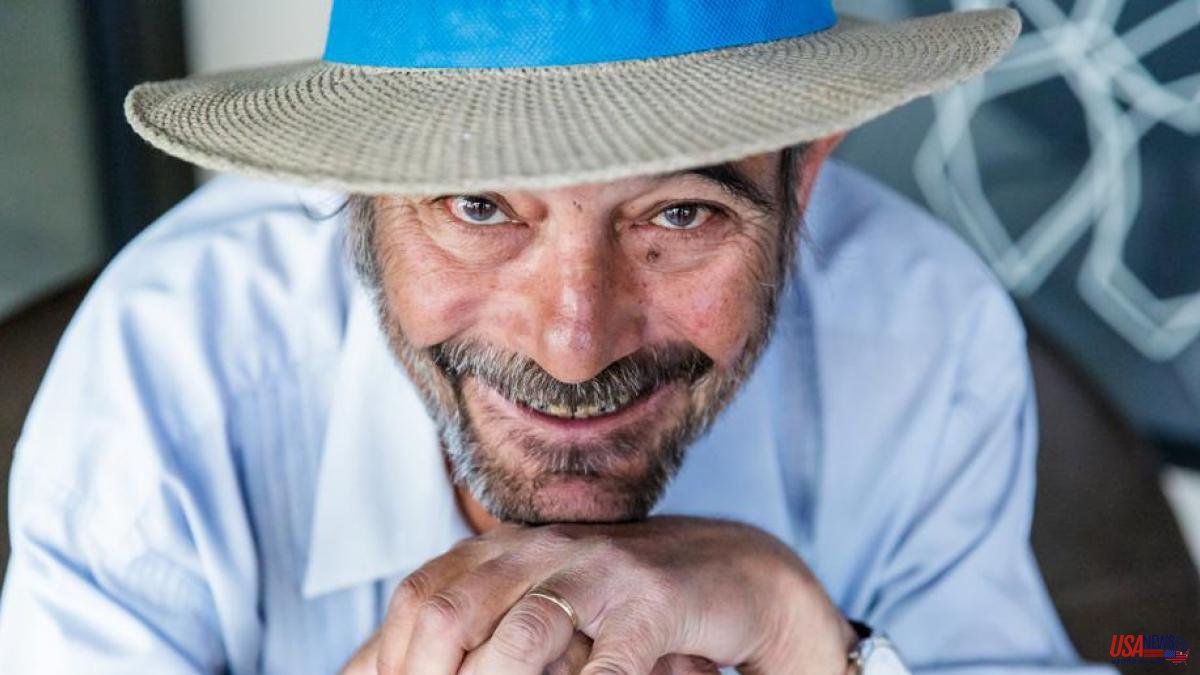 Rafael Reig (Cangas de Onís, 1963) arrives from the town, Cercedilla, on a bus, wearing a straw hat and leaning on a hazelnut cane. Three months ago he closed the bookstore that ran there ("so we all lost money") and now he visits that Madrid where he lived for so long to promote his new novel, The river of ashes (Tusquets) where he narrates the day to day of a wealthy old man, who, after suffering a stroke, moves to a residence in the mountains of Madrid while the pandemic spreads throughout the world. The work, in which tenderness prevails over humor, consolidates him as one of the most important Spanish authors and some critics, such as J.A. Masoliver Ródenas, believe that it is his best novel.

Where did this idea come from?

I wanted to write a novel about the end of life. Someone older who takes stock. When I left the first draft with a friend who was a caretaker in a hospital, he was very angry.

Because of how he talked about health personnel. ‘Pedrito, how much more do we have to applaud you, man?’ I told him. Is it that this cannot be taken for granted, the toilets, the management of the pandemic? In the end I put a different virus, another disease. Nothing you can laugh at is going to scare you. I have been prophetic: I speak of false masks, of shopping scams... I use hospital slang, because they call the dead 'exitus' or have regulations such as the prohibition of running so as not to cause panic. But the important thing is what the old men say: they have left us alone.

Its protagonist has enormous dignity.

Yes, twilight. Nobody is redeemed from anything, he does not believe in guilt or forgiveness, but he does manage to behave well, in the end.

On the cane. No character exists without having something of the author. I have written about Marilyn Monroe, and I also have something of Marilyn, of an overwhelmed woman. In my previous novel, the author was me, here it is rather what it could be in twenty years.

What is your grandfather afraid of?

Like you and me, he's scared to death. He feels outrage at the brutality and sadism with which we are used to dying. He wants a dignified death, the death that comes from his life, as Rilke said. He doesn't want to die in a hospital tube. Why do you have to die like this? Before, people died at home. We are already like the Americans: if you die it turns out that it is your fault: you have drunk too much, you have not played sports or eaten fruit. But if everyone dies!

Why does he carry a cane?

I've been lame part-time due to a vascular problem, now I keep wearing it for coquetry, especially when I come to Madrid, so that young people don't harass me.

Through the former partner of the protagonist, Cati, he addresses the issue of mental health.

She had a brain tumor, which caused enormous character changes, many crises. The character accuses himself of having treated her badly but how was he to know that it came from a tumor, she seemed like a mad rage, she blames herself that she does not have.

"Old age is the realm of freedom," we read.

As an old man, one already says what comes out of the balls. I claim that: you have no fear and nothing to lose. What is going to happen to you? At 30 years old, maybe in the office they look at you badly, but at 80, where are they going to kick you out? The pension cannot be taken away from you.

“For whoever has, will be given and will have more; but from the one he does not have, even what he has will be taken away from him.”

Matthew 13:12, yes sir! I'm talking about the 'Matthew effect', which is what rules the world, that's how everything works: family, money, marriage, work, sex... Stiglitz and the great economists talk about it, I've simply named it after myself bill.

Matías Folguerosa, the government spokesman for the pandemic, is the spitting image of Fernando Simón.

I take it sarcastically, because... First, he tells us that there was no airborne infection, that it was only from the hands. Later it was seen that it was idiotic, as we all presumed, because no virus is left alone on furniture. It was forbidden to walk the children during confinement, but you could walk the dogs instead. There is also a president Madelman who has the idea of ​​taking out the military commanders at the press conferences about the disease. Is that...

That thing about grandparents consuming prostitution...

I have done an investigation. I have an 82-year-old friend that I walk with, and my wife's daughter worked in a nursing home during the pandemic. In the sex scenes I have fallen short. There are old people who go down the hall with their jags in the air shouting things. Even to me, who am a beast, it seemed too much. And they set up some guateques...

But do they consume paid sex?

What sex are you going to consume in a residence at the age of 80 if it is not paid? If you have money and they jerk you off, why not? The opposite is to deny reality: the elderly need sex, a little, not much, but something yes.

Its title is fluvial and metaphorical.

It alludes to Death in Venice, whose protagonist is called Von Aschenbach, which means 'stream of ashes'. The rivers of ashes exist, and I am a Quevedian: we will be ashes but it will make sense.

It alludes to the “gift of drunkenness”, which is generally much reviled.

That part is a bit autobiographical. The first book by the poet Claudio Rodríguez was called that, Don de la ebbriedad. As Savater said, 'I've spent half my life drunk, and it hasn't been the worst half'. It gives me energy, but each one has to find his drug or medicine, there are also those who walk through the fields for three hours, I have seen them.

How do you see yourself in 20 years?

Very free of everything and very well. I'm not in enviable health, but fuel is enough for twenty more years. I will do two or three more novels. I have done everything possible to fall on the street dead. My life has been very messy... and still is.

How not? I don't tolerate him saying that. I've had three whiskeys already, and it's noon. I have taken two in Cercedilla, to gain strength before coming to Madrid. I've been gone eleven years.

How has going to the mountain affected you as a writer?

Much more focused. In the town, I am a character, they reserve a table for me in the morning, to which I go with a little notebook and I write there for hours, by hand.

Yes, my writing is ecological, handmade, Tusquets should put a label on the cover. I live relaxed, but I have become a timorous. I, who have traveled all over the world, have been to Colombia, the USA, Qatar, Mexico… and now I need hours of preparation to take the bus to Madrid.

I negotiated with the equivalent of the Ministry of Culture, and they paid me $100,000 tocateja to write a novel set in the Arab world. It's called Friendly Fire and they didn't publish it for me because the bad guys were the rich emirates. I sent Tusquets's lawyers to get it back, and no way, those rights didn't have an expiration date.

Is the novel still unpublished?

Yes, but it's like a tupperware, I've been taking advantage of fragments for other novels of mine, overheated scenes.