In a solemn ceremony, Russian President Vladimir Putin formalized this Friday in the Kremlin the annexation of four Ukrainian territories controlled by Russian and pro-Russian troops during more than seven months of conflict with Ukraine. 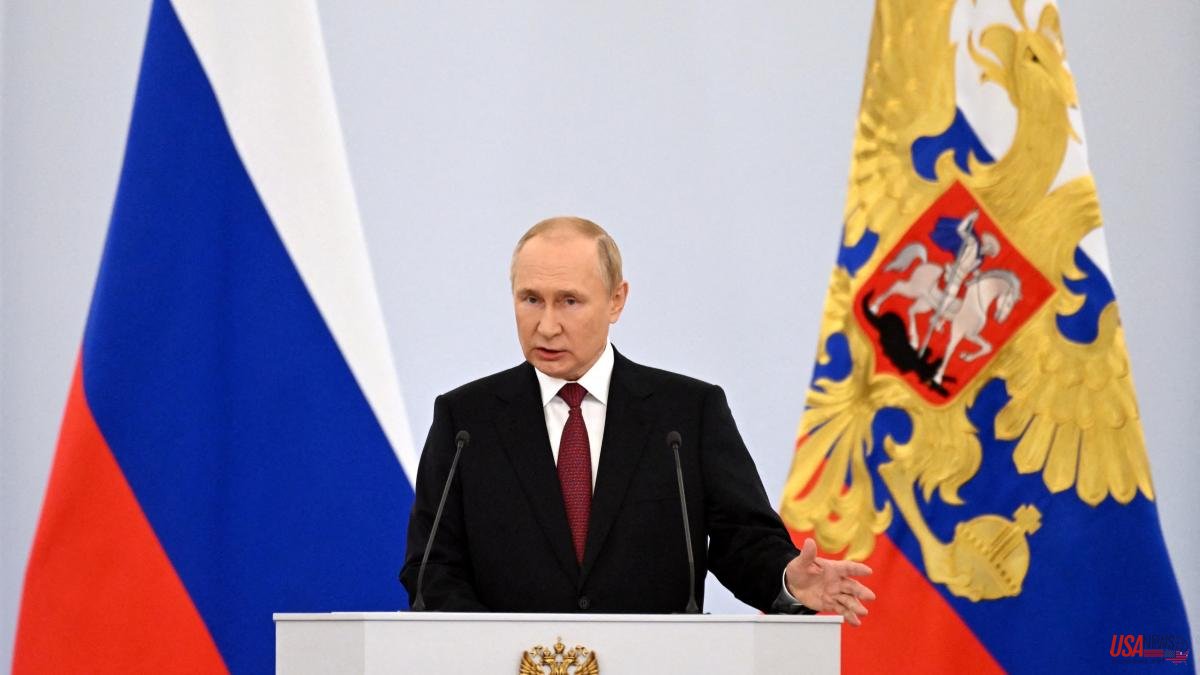 In a solemn ceremony, Russian President Vladimir Putin formalized this Friday in the Kremlin the annexation of four Ukrainian territories controlled by Russian and pro-Russian troops during more than seven months of conflict with Ukraine. With the signing of the corresponding international treaties, Moscow incorporates into the Russian Federation the self-proclaimed People's Republics of Donetsk (DPR) and Luhansk (RPL), in eastern Ukraine; and to Kherson and Zaporizhia, in the south. In total, 15% of the territory of Ukraine.

This formal act took place three days after the express referendums held in those regions to join Russia concluded. "This is the wish of millions of people. The people have made an unequivocal choice," assured the Russian leader in a previous speech, in which he evoked the right of self-determination of peoples recognized by the United Nations.

"I want you to listen to me in Kyiv and in the West: the people of Donetsk, Luhansk, Kherson and Zaporizhia have become our fellow citizens," Putin said, and after a brief drama he added: "Forever."

He then said that Russia is ready to talk with Ukraine. And he called on the Kyiv government to end the fighting and return to the negotiating table. But he pointed out that "about Donetsk, Luhansk, Kherson and Zaporizhia there is nothing to talk about." The decision to join Russia is final, he added. And "Russia does not betray her people," he asserted.

Putin added that Russia will defend its land, which includes the new regions, "with all the forces and means at our disposal and we will do everything to guarantee the safe life of our people. This is the great liberating mission of our people," he said. .

In the decimonic St. George Hall of the Kremlin Grand Palace, Putin was accompanied by the leaders of those four territories: Dennis Pushilin for Donetsk, Leonid Pásechnik for Luhansk, Vladimir Saldo for Jerson and Yevgueni Bálitski for Zaporiyia.

The four signed, together with Putin, the treaties that now make them part of Russia, although only in the eyes of Moscow, because Ukraine and the international community reject this whole process.

The formalities concluded with the five standing up, greeting each other and under the Russian anthem that was played throughout the room.

The celebrations will continue in Moscow, with a concert in Red Square where giant screens and billboards proclaim the belonging of these regions to Russia. The same thing happened on March 18, 2014, after Russia formalized the annexation of the Crimean peninsula. Then Putin attended the concert.

In the decimonic St. George Hall of the Kremlin Grand Palace, Putin was accompanied by the leaders of those four territories (Denis Pushilin for Donetsk, Leonid Pásechnik for Luhansk, Vladimir Saldo for Jerson and Yevgueni Bálitski for Zaporiyia.

The formalities in the Kremlin will be followed by a concert in the Red Square where giant screens and billboards proclaim the belonging of these regions to Russia. The same thing happened on March 18, 2014, after Russia formalized the annexation of the Crimean peninsula. Then Putin attended the concert.

The signing of international treaties is the first stage to include a new territory in Russia, according to Russian law. The agreement signed this Friday describes the name and status of the new entity, the action of Russian legislation in the territory, as well as the transition period for integration into the "economic, financial, credit and legal system."

According to what happened in 2014 with the process of annexation of Crimea, the new territories are considered united to Russia after the signing of the treaties, deputy Daniil Bessarábov, vice president of the Commission on State Construction and Legislation, said according to RBK.

But after the ceremony, more steps must be taken for full incorporation. The Russian president must go to the Constitutional Court to verify that the act complies with the Russian Magna Carta.

Eight and a half years ago, the verification before the Constitutional Court of the entry of the Crimean peninsula into Russia lasted less than a day. On March 18, 2014, the accession treaties of the Republic of Crimea and the city of Sevastopol were signed, and on the 19th the Court unanimously recognized that they were legal. On this occasion, the request can immediately reach the Court, that is, this same September 30.

Russian legislators, deputies and senators, who will complete the process next week, were also present in the Kremlin's hall of Saint George. If the Constitutional Court finds no legal violations, Putin will send the treaties to their respective Chambers, the Duma and the Federation Council.

The Duma (Lower House) will meet on Monday, October 3. The session of the Federation Council (Upper House or Senate) is scheduled for a day later.

Hours earlier Putin recognized the independence of Jersón and Zaporiyia, a prerequisite for their annexation, by signing the corresponding "ukaz" for each case. The referendum on accession to Russia in the territories controlled by Russian troops in these provinces included independence from Ukraine.

That step had already been taken by Donetsk and Luhansk in 2014, when they declared themselves People's Republics (RPD and RPL). Russia did not recognize them then, but last February, a few days before Putin sent soldiers and tanks to Ukraine in what Russia calls a "special military operation" and the current armed conflict with Ukraine broke out.

The recognition of Russia was taken "in accordance with universally recognized principles and international norms of international law, recognizing and reaffirming the principle of equal rights and self-determination of peoples", enshrined in the charter of the United Nations and having taking into account the will of the people expressed in a referendum, is read in the presidential decrees.

The affirmation contrasts with the declarations made on Thursday by the Secretary General of the UN, António Guterres, who warned that the incorporation of the four Ukrainian territories to Russia will not have any legality.

Annexation "will have no legal value and deserves to be condemned," Guterres said. And he pointed out that the annexations violate the UN Charter and go against "everything that the international community should defend." According to him, Moscow's plan "should not be accepted" and represents a "dangerous escalation" of the Ukrainian conflict.

Last week, the pro-Russian leaders of the DPR and LPR, plus those of Kherson and Zaporizhia called referenda in the race to join Russia at a time when Moscow's troops were feeling the pressure on the battlefield. The counter-offensive launched by Kyiv this month managed to recover much of the territory of the province of Kharkiv (northeast) that the Russians had taken in previous months.

Voting to include these four territories on the Russian map was held for five days (September 23-27), amid criticism from the Government of Ukraine and Western countries, who called them "false" and " fictitious".

After the count, the electoral committees formed in those areas announced that in Kherson 87.05% supported joining Russia and in Zaporizhia the favorable vote was 93.11%, while 98.42% supported it in Luhansk and the 99.23% in Donetsk.

With this annexation, Moscow will consider the entire Donetsk and Luhansk provinces Russian territory, that is, including areas controlled by its army and areas that it does not, according to Kremlin spokesman Dimitri Peskov. Regarding Kherson and Zaporizhia, he assured that the drawing of the borders still needs to be discussed.

After more than seven months of fighting, Russian troops control almost all of Luhansk and somewhat less Jerson. But in Donetsk and Zaporiyia Russian control does not reach 60 %.

In any case, the annexed area is included within Moscow's "nuclear umbrella", since they say they have every right to defend the Russian land with all their available weapons, including nuclear ones. Putin himself said it last week, when he assured that all kinds of weapons can be used to defend the "territorial integrity" of Russia. And this Friday was reiterated by spokesman Peskov, who before the ceremony said that an attack against these territories "can be nothing more" than an attack against Russia.