Puigdemont bets on leaving the Government while Turull remains silent

While the general secretary of JuntsxCat, Jordi Turull, remains silent on his position regarding the consultation on the continuity of training in the Government of Pere Aragonès, the former president of the Generalitat and of the party, Carles Puigdemont, has been inclined to leave the Catalan executive by sharing an article by the party's spokesperson, Josep Rius, in which he defends this idea and criticizes the "immobilism" of ERC and that "only prioritizes the pact signed with the PSOE". 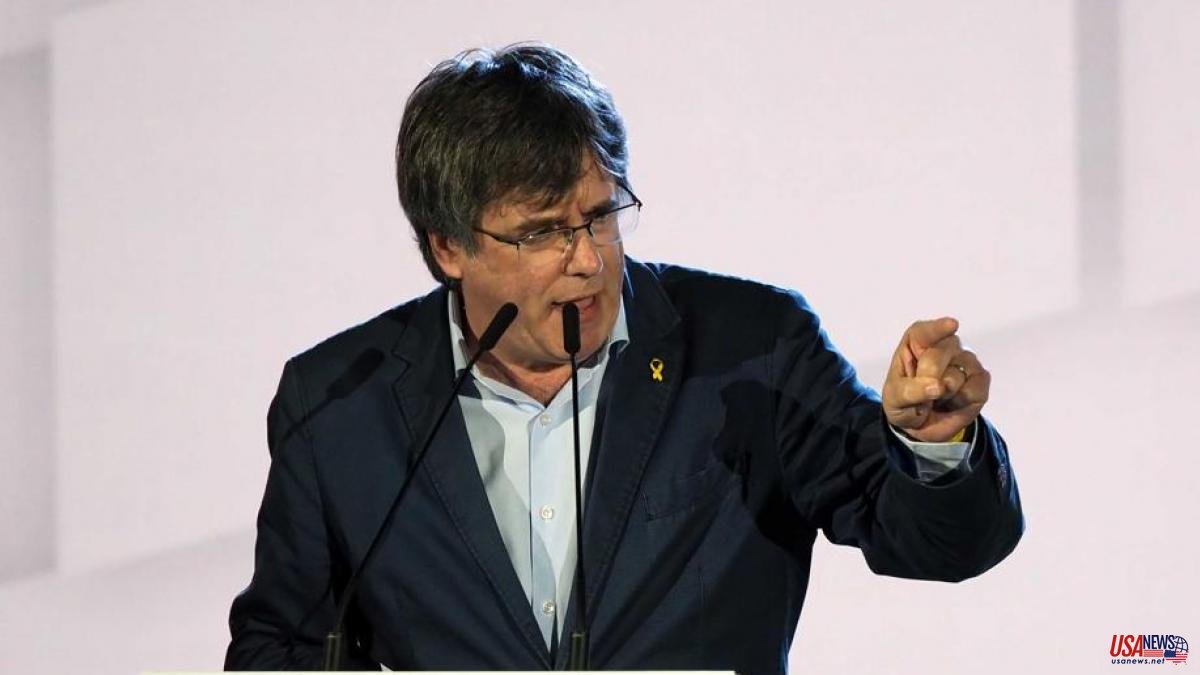 While the general secretary of JuntsxCat, Jordi Turull, remains silent on his position regarding the consultation on the continuity of training in the Government of Pere Aragonès, the former president of the Generalitat and of the party, Carles Puigdemont, has been inclined to leave the Catalan executive by sharing an article by the party's spokesperson, Josep Rius, in which he defends this idea and criticizes the "immobilism" of ERC and that "only prioritizes the pact signed with the PSOE". The article, entitled "Yes together, yes to independence, not in this Government", was published in El Punt Avui, and the former president retweeted it.

The former president has not yet made an explicit statement, but with the publication of the article, he reveals his sense of vote and reinforces the position he took yesterday after retweeting a message with the expression "pacta sunt servanda" (the agreement is binding). In addition, in a thread on his Twitter account, Puidemont defends open debate in the party, understanding that he "reinforces democracy" in the face of external criticism. For the former president, "the lack of respect for plurality is the prelude to authoritarianism."

Beyond Puigdemont and Rius, other members of his circle, such as Aleix Sarri -director of the Europarliamentary Joint Office- or Jami Matamala -personal friend-, have also shared messages on social networks in which they lean towards 'no' in the consultation Other important leaders, some of them close to the president of the party, Laura Borràs, such as Jaume Alonso-Cuevillas, Aurora Madaula, Francesc de Dalmases or Joan Canadell, have also shown themselves in favor of breaking with ERC. Gemma Geis, Minister for Research and Universities, has also expressed herself in this sense. Since Parliament has stressed that, if the Government pact is not fulfilled, especially in university matters, it will not be "able" to continue in office.

Puigdemont's position, along with that of other party leaders and institutional officials, including Borràs, contrasts with the silence still maintained by the party's general secretary, Jordi Turull, on whom all eyes fall after last Monday ensure that he would not put himself in profile before the consultation and that he would share the meaning of his vote with the militancy.

Precisely this Wednesday, the electoral union of Junts per Catalunya has urged internal and institutional officials to refrain from using their positions to favor any of the options and to remain neutral, which could force Turull to remain neutral and not communicate his position to the bases.

The institutional or pragmatic sector of training, the one that supported Turull in the Argelers congress and in La Farga de l'Hospitalet in a majority way and that in internal processes has supported its candidates, is for continuity in the Government. Ministers close to the Secretary General such as Lourdes Ciuró and Violant Cervera have not hidden their position these days and this sector is mobilizing for the consultation.

The head of Justice has expressed in a tweet the will "that our party continues working for independence from the solvency of day-to-day management." Cervera, from Drets Socials, has wielded the "utility" of being in the Government and has assured that with an exit it will be "more difficult to rebuild the independence unit".

Other councillors, whose position favorable to coninuidad in the Government was already known, but who today have confirmed it in separate interviews are the Minister of Economy, Jaume Giró, and the Minister of Foreign Affairs, Victòria Alsina.

Giró has done so in RAC1 to contradict the former vice president of the Generalitat and fellow party member Jordi Puigneró, who said that the ERC does not want them in the Government. "One thing is that he is an electoral adversary, but I doubt very much that he does not want us in the Government, because, if we leave, for Junts it will be a serious mistake, but for Esquerra too, because he will keep 33 seats". "Leaving the government weakens the pro-independence majority", he has defended and has argued that if it is said that ERC is not pro-independence, "we have another problem, that pro-independence is 25%".

Giró has also questioned "the threat of the question of trust" to Aragonès that Albert Batet verbalized last week in Parliament. "The strategy has not gone well" acknowledged Giró to add that if the executive had been consulted "I would have given my opinion". In any case, the head of Economy has asserted that if the no finally wins, he will leave the Government immediately . "On Monday I will take a cardboard box, I will collect the notebooks and I will go where I came from."

For its part, Alsina has warned that leaving the Government could lead Junts to "fall into irrelevance, lose visibility, fade away and not be able to defend its program" by becoming the second largest opposition party. "The crossing in the desert would not be that of Convergència with Artur Mas, with 60 deputies and a muscular party. Let's be realistic", he warned in an interview with Catalunya Ràdio, in which he stressed that it would be a failure to leave the Government because Junts I would not be using the best platform to do politics.

The 129th president of the Generalitat, Artur Mas, also intervened in the debate this Wednesday to demand that Aragonès, "as the head of the government", make a "sincere effort" to prevent the Govern from breaking up. In an interview on La 2, Artur Mas, who is not a member of Junts, has launched this request because he considers that the breakup is "avoidable". Otherwise, Mas believes that "the price to pay would be very high" since, in his opinion, the pro-independence majority and the credibility of sovereignty as a project are at risk. "Who will take responsibility for it?" he has wondered.