Three vans were parked since mid-afternoon yesterday at the Azadi (“Freedom”) gate of Tehran's Sharif University, ready to pick up students who dared to raise their voices of protest. 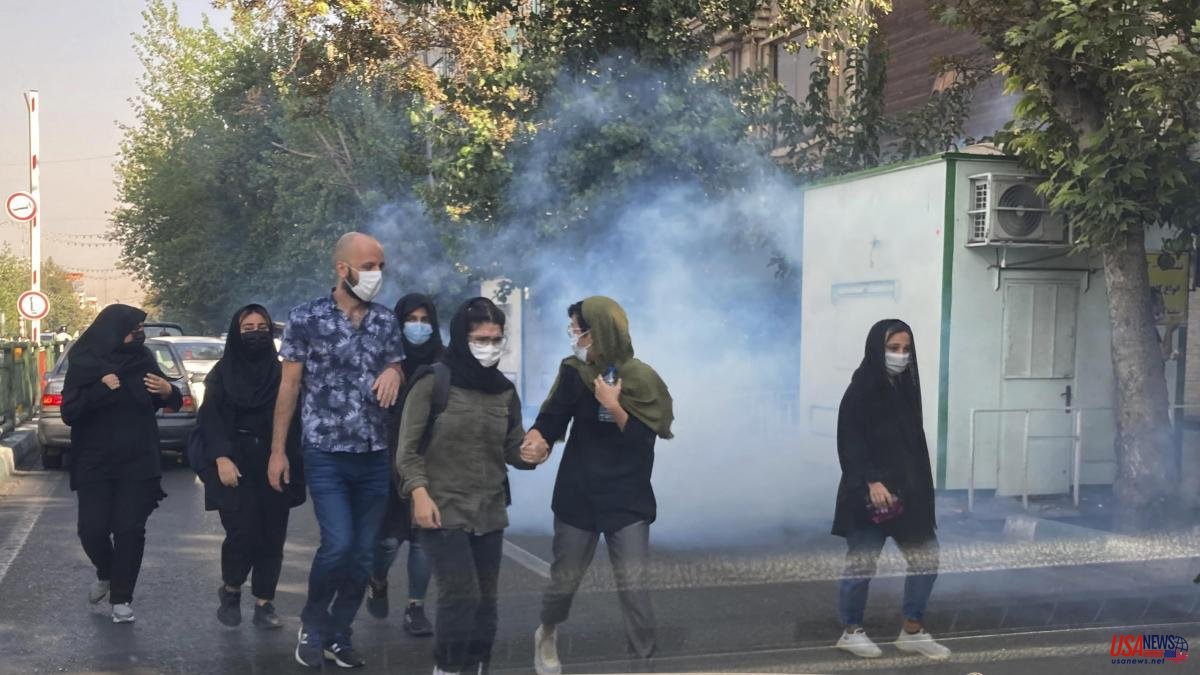 Three vans were parked since mid-afternoon yesterday at the Azadi (“Freedom”) gate of Tehran's Sharif University, ready to pick up students who dared to raise their voices of protest. Dozens of uniformed men and plainclothes agents, with their batons and shotguns, swarmed around the surroundings avoiding any congregation of students, who had called a strike in response to the attacks that hundreds of classmates experienced the night before on the university campus. More than 40 would have been arrested.

Similar scenes, with heavy security deployments, were seen all along Enqelab (“Revolution”) Avenue, where other university centers are located, including the prestigious University of Tehran, whose main door was locked tight. On the surrounding sidewalks, small groups of people were forming, waiting for what the afternoon would bring. They are recognized for wearing masks and a bottle of water in hand to counteract tear gas.

The start of the academic year in Iran, which coincides with the beginning of autumn, has given a new air to the protests that began more than two weeks ago when the death of Mahsa Amini, the young Kurdish woman who died after being detained, became known. by the morality police. Since Saturday, thousands of students from universities and colleges across the country have been mobilizing to protest both Mahsa's death and to call for the release of hundreds – or thousands – of young detainees.

"Students have to be released", "Evin prison - the main detention center in Tehran - has become a university", say some of the slogans that have been heard these days and that often include strong harangues against Supreme Leader Ali Khamenei. “Death to the dictator”, is heard even among the youngest as they wave the veil that necessarily has to cover their heads. This is happening not only in Tehran – where the governor of the province had declared an end to the protests on September 29 – but also in many other cities. According to a media related to the Revolutionary Guards, 93% of those who participate in the protests are under 25 years of age.

But if the outrage was already great, it became even greater since Sunday with the attack on Sharif University, considered the university of geniuses. Hundreds of students had gathered to protest in silence in front of the center (asking for the release of their classmates) but the protest ended up becoming a Dantesque scenario where the young people were persecuted and cornered by the security forces, an act that goes against the law that prohibits the entry of the police in educational centers

All this was happening while dozens of cars were piling up on the roads near the university, honking nonstop in an attempt to stop the repression. After hours of tension and panic among the students, which included the presence of the Minister of Science, who accused the youth of causing disorder and wasting public money, the students were able to leave the campus with the protection of some teachers. But the tension continues, especially in the dormitories, where last night some students denounced that they were besieged by the authorities.

“The hardest thing for young people is to see how they want us to see that we are the bad guys in this story. Nobody recognizes the brutality with which they attack us”, said Sara, a 23-year-old student. They were statements with which they wanted to respond to Ali Khamenei, who yesterday for the first time made reference to the protests, which he considers a breaking point for the country. It is the first time that thousands of people, especially women, stand up to ask for their rights and security.

Ayatollah Khamenei, who said he was heartbroken by Mahsa Amini's death, said the riots had been planned in advance and blamed "the United States, the Zionist regime and Iranian traitors living outside the country." "All these people who commit acts of destruction are not the same," added the leader, who was seen for the first time in ten days, this time at the graduation of police cadets. Khamenei assured that “some of them [the protesters] are young, teenagers, and they are just on the street after seeing something online. If you punish them, they will understand that they were wrong.”