Protesters poised to overthrow the government of Sri Lanka 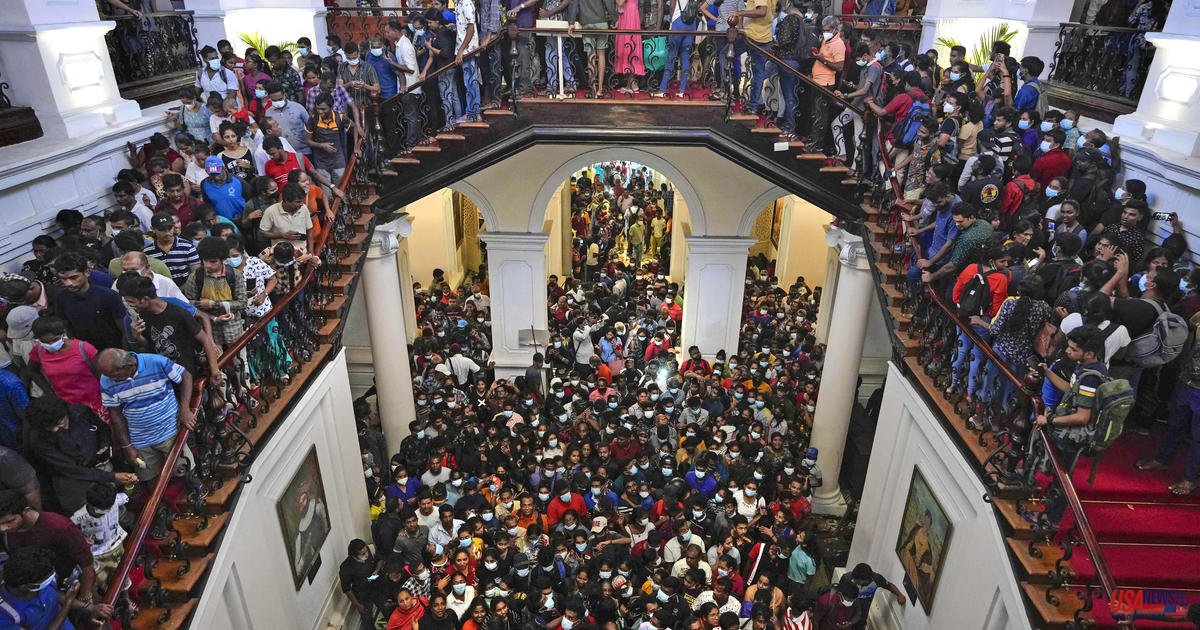 On Monday, thousands of protestors refused to leave the official residences Sri Lanka's president or prime minister. They had occupied these homes for several days. The country was facing a wave of protests over its high living costs. Protesters refused to leave their homes and the peaceful sit-ins were symbolic and literal representations of this outrage.

Monday's confirmation by the prime minister's office that President Gotabaya Rajapaksa would be resigning on Wednesday was a response to one demand from protesters.

Over the weekend, massive demonstrations erupted in Sri Lanka, a South Asian nation with 22 million inhabitants. It is located just off India's south coast. Since Sri Lanka was in an economic crisis for several months, protestors in thousands gathered at the presidential residence in Colombo to demand that their problems be addressed.

On Saturday, protesters set fire to Ranil Wickremesinghe’s private residence. He refused to resign until a new government was formed.

Protesters demand the immediate resignation of both men and blame them for the poor management of Sri Lanka's economy.

Rajapaksa has not spoken out publicly since Saturday's storm at his home. According to reports, Rajapaksa may be aboard a navy ship off the coast.

Despite assurances by the head of the country’s parliament that the president would resign, protesters refused to leave his seafront home, even though the president has not been seen in days.

Online videos have been posted and broadcast by news outlets showing protesters running through the extravagant residence. Some are seen taking a dip at the garden pool, while others relax on the beds or using the showers.

Sri Lanka has been suffering from cash shortages for several months, and it is now struggling to import essentials such as food and fuel. The COVID-19 pandemic, Sri Lanka's main economic driver, was blamed by the government. Economists disagree. They say that there are many other factors such as political corruption and economic mismanagement.

The country is in default on $51 billion of its foreign debt and cannot make its interest payments. The government is currently in talks with the International Monetary Fund for a $3 billion bailout package. However, it has to rely on the help of India and China for now.

He has been criticised for the huge tax cuts that he implemented in 2019, which cost more than $1.4 million per year. His government also banned chemical fertilisers last year in order to increase organic farming. This caught many farmers off guard and eventually led to crop failure, which forced the government to import food to alleviate its foreign currency shortage.

Over the past few months, the value of the Sri Lankan rupee fell by 80%. This has made imports more expensive and exacerbated inflation. Food prices have increased by more than 50%. This confluence of events has led to Sri Lanka facing national bankruptcy. There is no cash left for import necessities, making everyday life difficult for millions.

In the heat of the summer, Sri Lankans faced 12-hour power outages. There was also a fuel shortage, which saw thousands queue up at gas stations to purchase a gallon of fuel.

Protesters began to enter the homes of the leaders and revealed the luxury that the president had while the rest of the country was starving. This only increased anger at the government.

Even if the IMF offers a bailout package, it could take weeks or even months for the country to get its fuel and food supplies back on track.

Mahinda Yapa Abeywardena, Speaker of Parliament, stated that a new coalition government would be needed within one week of the president's official resignation. Opposition parties met Sunday to discuss the formation a new government. In the days ahead, more talks are expected.

The constitution states that if the president or prime minister both resign, then the Speaker of the House should assume the role of interim president.

It seemed that there was still uncertainty for the beleaguered Sri Lankan population before any potential bailouts could start providing some relief on the ground.