Princess of Asturias Awards, words that seek to gather

Without attendance restrictions, without masks or special health regulations, the delivery of the Princess of Asturias Awards, one of the most significant events of the Spanish cultural year, recovered all its solemnity and beauty in its 41st edition. 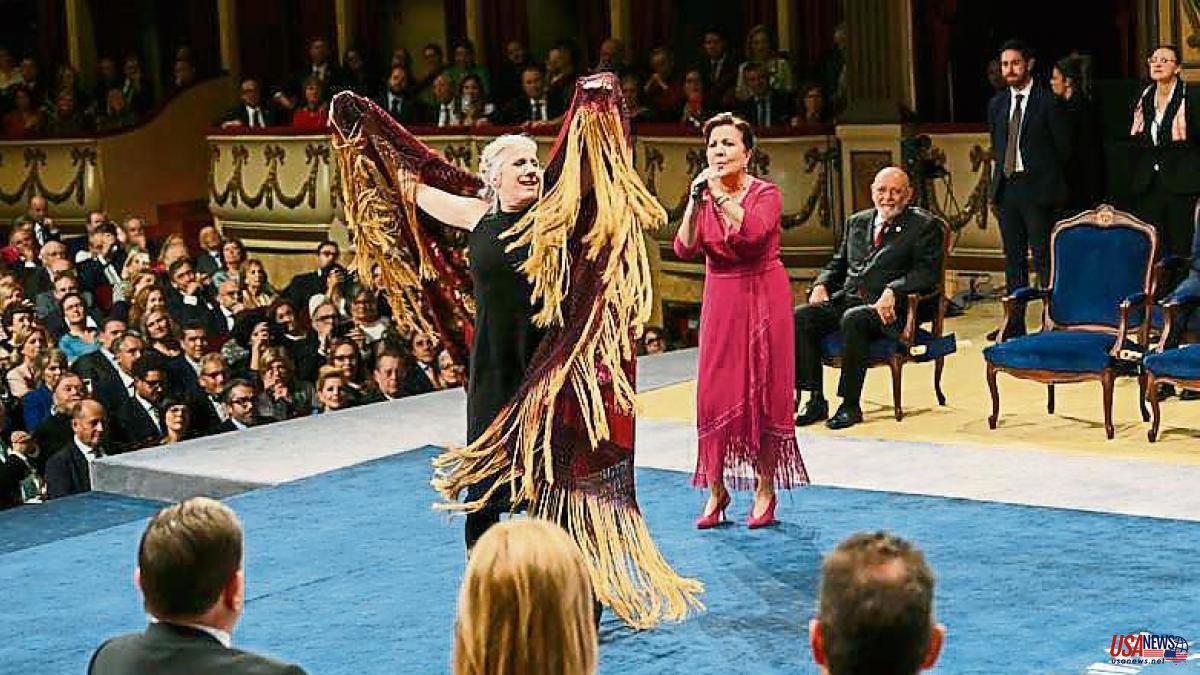 Without attendance restrictions, without masks or special health regulations, the delivery of the Princess of Asturias Awards, one of the most significant events of the Spanish cultural year, recovered all its solemnity and beauty in its 41st edition.

In accordance with the statutes of the Princess of Asturias Foundation, this has also been the last year in which the ophthalmologist Luis Fernández-Vega Sanz, who has turned seventy, acts as president of the board of trustees, a position in which he gives way to the academic and director Ana Isabel Fernández, the first woman to occupy it.

The generalized return to social normality has also returned its flight to the program of events throughout the Principality that has been consolidated in recent years under the tutelage of Teresa Sanjurjo, director of the Foundation. Cultural centers, universities, institutes and schools in Gijón, Avilés, Pola de Lena or Villaviciosa, as well as the Fabrica de La Vega and other spaces in the Asturian capital, have received and debated since Monday, usually with the scent of a crowd, with the different awardees.

In the award ceremony at the Campoamor Theater, the first speeches of the winners were given by those of letters. Juan Mayorga, great figure of contemporary dramaturgy, RAE academic, author of works among which Himmelweg stands out, read the first. He recalled his learning, precisely of the letters and words in the family environment, the first plays that he watched and that stimulated his vocation - Doña Rosita la soltera and La vida es sueño -, and addressing the public , stated:

“You, viewers, are always by my side, from the first word I put on the white sheet, even before the first word. What decides an author to write for the theater, what distinguishes such a singular form of writing, is the will to gather. We authors gather letters with the hope that one day some actors will gather around them and then open their meeting to the city…”.

Then the Polish journalist and historian Adam Michnik, winner of Communication and Humanities, linked for more than thirty years to Gazeta Wyborcza, an emblematic media outlet for the defense of democracy and author of works such as The Second Revolution and Letters from Prison, took the floor. .

Michnik recalled that “Spain has been for me –and for many other Poles– a model to follow. The Spanish experience taught us to confront the dictatorship and to seek a path to democracy through dialogue and consensus”. He denounced that the values ​​that he has always defended, freedom and truth, “are once again threatened today by the criminal aggression of the Putin regime; helping Ukraine in its struggle is the duty of all democrats in the world.” The veteran informer collected the award from him by outlining the V for victory.

The Mexican anthropologist Eduardo Matos Moctezuma, winner of the Social Sciences Award, also spoke on the Campoamor stage. Researcher of the pre-Hispanic civilizations of Mexico and Mesoamerica, he was responsible for the excavations that recovered the remains of ancient Tenochtitlan in the center of the Mexican capital.

"That modern time machine that is archeology has been for me the means to transpose time itself and reach the peoples that preceded us in history," Matos argued in his speech while highlighting the "indissoluble links that unite Mexico and Spain” and that, in his opinion, they should move us “not to be stuck in the past but to look forward”.

The navigator Ellen MacArthur rose in 2005 with the record for the fastest solo round the world. In subsequent years she has dedicated herself to charitable initiatives, and today she fights for a better use of resources.

The winner in the field of International Cooperation pointed out that "if instead of taking, manufacturing and wasting, we channel waste and pollution, and regenerate nature, this would turn out to be an economy that does not run out, that takes advantage of innovation and creativity and induce long-term growth while making the world a better place.

The award for Scientific and Technical Research has gone to Demis Hassabis, Yann Le Cun, Yoshia Bengio and Geoffery Hinton, for their work on Artificial Intelligence. The Sports, in the Foundation and Refugee Olympic Team. The Japanese architect Shigeru Ban, celebrated for his use of light materials such as cardboard and paper, picked up the Concordia. The winners receive 50,000 euros and a sculpture, created in his day by Joan Miró.