The press conference looks like that of a great rock star: there is no lack of a swarm of photographers and television cameras in the packed room of a large hotel in front of the Congress of Deputies. 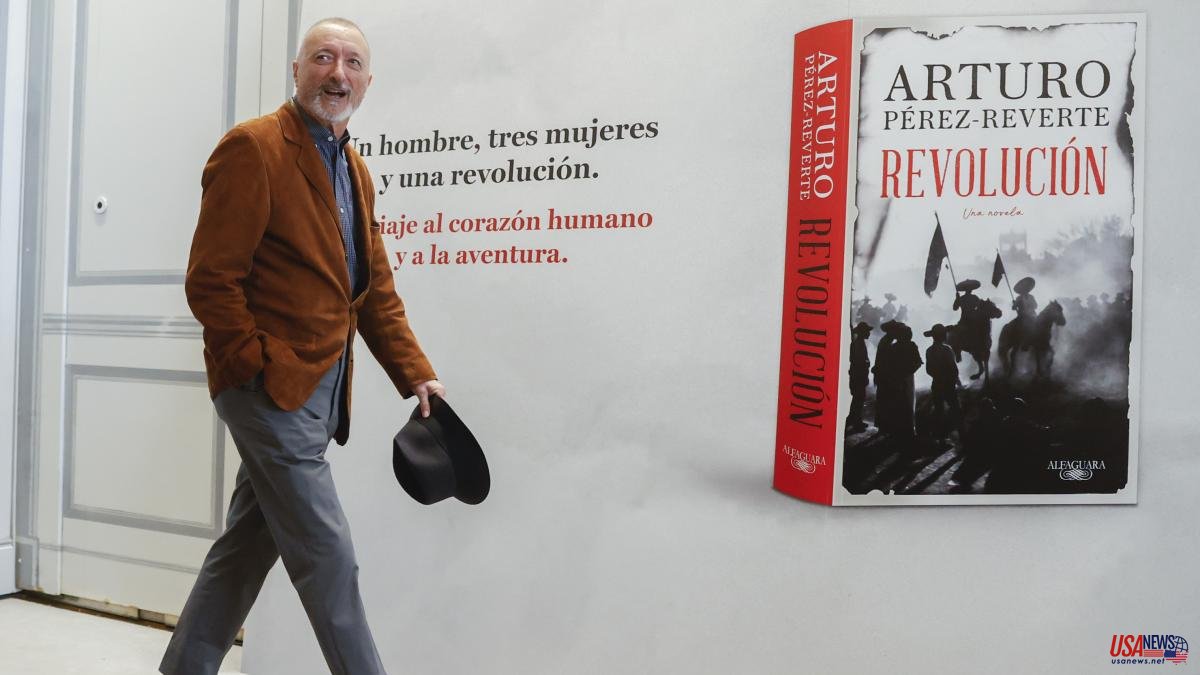 The press conference looks like that of a great rock star: there is no lack of a swarm of photographers and television cameras in the packed room of a large hotel in front of the Congress of Deputies. The international press is not even missing, and the questions sound from time to time with a Mexican or Belgian accent. The reason for so much expectation is the thirty-second novel by Arturo Pérez-Reverte: Revolución (Alfaguara), a story set in one of the great uprisings at the beginning of the 20th century, the Mexican revolution of Pancho Villa and Emiliano Zapata. Told and lived, yes, through the eyes of a young Spanish mining engineer, Martín Garrett, who cares much less about the ideology of the revolt than how human beings behave in the horror of a war. And to whom Pérez-Reverte, who remembers that he is one month away from his 71st birthday, has given him the look of youth.

"Revolution -he assures- is not a historical novel, I use history as so many other times as a pretext, a narrative framework. My novels, even those by Alatriste, are falsely historical. I always raise current problems, whether I am a tired hero like Alatriste or a young man like Martín Garrett. I use history as a key to understand the present. Without history, modern man is an orphan, he lacks references to identify life. Besides, a novel told in current time seems vulgar to me because today time is vulgar narratively speaking In the movies, everything is solved with mobile phones, there is a hacker who runs the computer... I am from the 20th century and my grandparents from the 19th, I still had to bribe the telephone operator to get a call in Mozambique or Angola, I like to move around in that world more."

In this sense, he highlights that Revolution is a novel of adventure and learning about how a young man during ten years of revolution ends up discovering violence, death, life, loyalty, love, thanks to the journey through the violent years of the Mexican revolution in its beginnings," he explains. And he says that to give life and thickness to the protagonist he has lent him "the way in which he ends up looking at the world."

"The advantage of being older and having a busy biography is that you can use elements passed through the narrative filter to turn them into literature. Violence, war, were years of learning for me in which I discovered very useful things as a person and a novelist" . She has also appointed, in addition to guerrillas, three fundamental women for this learning process, an illiterate soldier with greasy braids, an American journalist and a well-to-do girl. "The presence of a woman in a man's life makes him go a long way in this initiatory learning process. Without the woman's gaze, the man has never taken the complete steps."

Of course, Mexico and the revolutions - how badly they end, in general - are the protagonists of the meeting with the press. "As a journalist I have covered several revolutions, in El Salvador, Romania, the Nicaraguan one, where Daniel Ortega is now, on Ortega's farm, I have seen the revolutionaries fight and die and pay the prices that are paid. The revolutions for what In general, those who make them lose them and those who come later and take advantage of them win them. The novel has a trace of melancholy when seeing so much courage and blood spilled and seeing what Mexico is now, where injustice continues, chieftaincy, humiliation and the sadness continues. Seeing these things makes one not have many illusions about the great revolutionary words, "he explains.

"But here the protagonist is not a revolutionary, he is not there because he believes in the cause of the people and that the world will be better if it goes through a bloodbath and existing structures are demolished. He is young, a technician, a mining engineer, sees a revolution, and he sees that in it individuals do things that he realizes make him understand, he learns about life, the human being, himself. And he stays to learn. He is not a revolutionary, he is a man who watches. And that look is changing him and making him a different man. He does not believe in the cause, he believes in human beings, he has loyalties and passions for the people who make the revolution, not for the revolution. Almost all revolutions have to be made with violence. Revolutions always end in a Daniel Ortega on his farm and that is very sad, which does not mean that they should not be made. There are times when human beings must fight even if it is without hope, that the bad guy bleeds nose".

"I got hooked on the war not because of the war but because of the human beings in the war," Pérez-Reverte insists. "There are people who can be heroes in the morning and loot, rape and kill in the afternoon. In that sense, this novel offers an absolutely different vision than the one that well-thinking and organized society sells us. In this time when everything is easy slogans and tweets in which ideologies and 3,000 years of memory are summed up in 180 characters, this novel gives a different view than usual. In that I am honest, I do not try to ingratiate myself with the world I live in, but to say how I have seen the world ".

About Mexico, he says that it is "an extraordinary country, if I were Mexican I would be writing novels every three months. A country that mixes cruelty and tenderness, violence and loyalty, respect and contempt for the rules, permanent violence mixed with extreme courtesy. the gun and they treat you all the time, 'give me your wallet or you die'. They don't kill you, you die". Regarding the request of the current president of Mexico, López Obrador, that Spain apologize for the conquest, he shuns "absurd" controversies and smiles that "if tomorrow the Mexican president criticizes my novel and dedicates a press conference to me with a photo of me above to talk about me, great, that helps to spread".

In the end, when asked about the lack of translation of contemporary Spanish authors abroad, he says that "it's not exact, there are authors that are widely translated", and provokes a few laughs when he remembers that the other day his translator into Chinese, who is now translating Línea of fire, sent him a list of expressions that he did not understand. "I was wondering what 'for my balls', 'mecagüenla' or 'go marmarla Parla' means. I spent the afternoon trying to explain it to a Chinese. This novel may have translation problems also because of the Mexican language," he admits amused .