Supporters of abortion rights have been feeling the effects of the Supreme Court's decision not to grant constitutional protection for their reproductive choice. 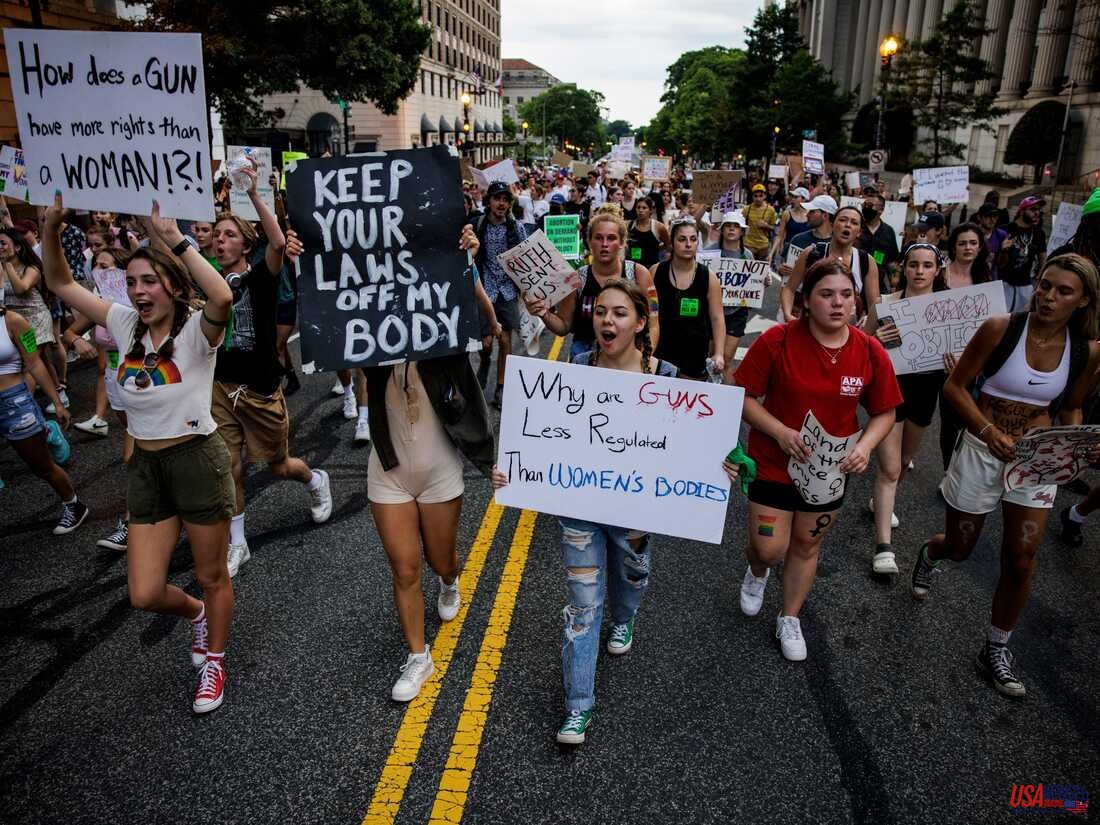 Supporters of abortion rights have been feeling the effects of the Supreme Court's decision not to grant constitutional protection for their reproductive choice. Some are launching a campaign for Congress to codify a federal abortion right. The legal environment is confusing for those who provide and fund abortion services. This makes it more difficult for them to do their job in large parts of America.

The court's decision has triggered 13 states to outlaw or limit abortion, with 13 more likely to follow suit in the coming weeks and months. Defenders of reproductive rights are now in the middle of a life-threatening battle. The next round of the fight for abortion providers and funding agencies is more than just politics and law. It's becoming more about logistics and money: Providing women in abortion-restricted states with the opportunity aEUR" and the means aEUR "to travel to abortion-friendly states.

A long list major corporations aEUR", including Amazon, Google, Starbucks and Dick's Sporting Goods aEUR", have announced that they will pay for travel expenses of employees who are seeking abortions. Gene Demby of NPR is one of the commentators who are asking questions about these policy announcements. He asks who are "employees?" Doordash has, for instance, stated that it will pay for abortion travel expenses for employees. However, most people who work at the food delivery company are independent contractors and will not be receiving this benefit.

It is not the well-paid employees of Fortune 500 corporations that are most affected by Roe v. Wade's overturning, but impoverished women living in red states who will be the ones most affected. They are more likely people of color to live in rural areas. However, other groups of women and those who don't identify themselves as women will also be affected. Many lack the ability or means to travel far away to undergo a costly procedure. Planned Parenthood states that an abortion can cost up to $750 in the first trimester and $1,500 in the second trimester. This does not include any additional costs such as gas, a plane ticket, lodging, or time away from work to care for the child.

Many Americans struggled to access and pay for abortion care even before Roe was overturned by the Supreme Court in Dobbs. Some lacked healthcare coverage. Some had insurance that covered healthcare, but it didn't cover the procedure. Others lived in "abortion deserts," where they had to travel a long way to terminate a pregnancy.

Women who are denied abortions often suffer from many social, psychological, economic, and medical problems. Researchers at UC San Francisco found that women who are denied an abortion and have to have an unplanned pregnancy to term have four times the chance of living below poverty level.

A number of organizations, both local and national, have been formed to assist people in paying for abortions. Post-Roe America is a country where money is more important than ever. Abortion funds have emerged as a crucial tool to help poor women in red state to get care if they need it.

The Women's Reproductive Rights Assistance Project was founded in 1991. It is the largest independent national nonprofit abortion fund. It offers financial assistance to women seeking abortions and emergency contraception through a network that includes 700 doctors and clinics across the country.

WRRAP spent $538301 in 2021 to help 2,565 women get abortions and emergency contraception. Nearly 60% were unemployed. 20 percent were students. 24 percent also had to travel outside of their state in order to obtain an abortion.

Sylvia Ghazarian is the executive director at WRRAP. She says that her organization saw an increase in patients who had to travel outside of their state for abortion care even before the Dobbs ruling. Due to economic hardships and restrictive laws, many clinics offering abortions are closing down. The remaining clinics have been overwhelmed by growing backlogs. These delays can have both financial and medical consequences. Ghazarian states that every week that a patient is forced to delay the procedure, "the price of an abortion rises."

WRRAP funds only abortion services and emergency contraceptives. It does not fund travel costs, as many other funds. A number of "practical support" organizations, such as The Brigid Alliance, have emerged in recent years to address the growing barriers to accessing abortion care due to high travel costs.

In 2018, the Brigid Alliance was established. It serves clients who have to travel approximately 1000 miles in order to obtain an abortion. They pay for expenses such as gas, food, travel, and childcare. Clients can also get virtual support from them to assist with their journey.

The Brigid Alliance's services have seen a surge in demand since their founding. Texas's Senate Bill 8 was passed last year. It severely limited abortion access. The law has led to Texans flooding nearby clinics, increasing wait times and driving up travel costs for abortion seekers. According to Odile Schalit (executive director), the Brigid Alliance witnessed a 900% rise in financial assistance demand.

Schalit states that now, after Roe v. Wade has been overturned, "we are expecting an even greater surge." Like other organizations, the Brigid Alliance has been able to benefit from a surge in charitable donations since Dobbs' decision was published. She asks, "Does the organisation have enough money? We don't, quite frankly. This is the hardest part of this work. She also stated that rising gas prices and inflation are making it more difficult to access abortions.

WRRAP is a member of The Brigid Alliance, which is an umbrella group of over 90 abortion funds. It seeks to "to eliminate logistical and financial barriers to abortion access." Lindsay Rodriguez, NNAF communications director, said that funds in their network responded to 80,000 calls between July 2020-2021 and distributed more than $11,000,000. She says that while they help more people each year, the funds for abortion are still underfunded. They can usually only fund 25% to 30% of those who apply for financial assistance.

Rodriguez predicts that NNAF will continue to see a surge in financial assistance demand, even though it has raised millions of dollars since the Dobbs decision was leaked. She says that every state that has a restriction on abortions, there is an additional price for each one. This increased price tag includes more travel from blue states to red states.

There is also a growing problem with capacity. While blue states have declared themselves "sanctuary" states for abortion, there is growing concern that these states will become overwhelmed by the influx of residents from red states.

Schalit states that funding interstate abortion travel and building infrastructure in blue countries to facilitate it are "critical ways we support access to abortion" in this post-Roe world. Interstate travel is now more important than ever, despite the loss of Roe's protections and the bans imposed by the Supreme Court decision.

Abortion funds won't have the resources to provide abortion care to low-income people in red states. It will be difficult. Even if they raise enough money to finance interstate abortion travel, and care for those who cannot afford it, legislators could still thwart their efforts.

Elisabeth Smith is the Center For Reproductive Rights' director of state policy advocacy and state policy. They want a national ban on abortion.

It is worth noting, however, that Supreme Court Justice Brett Kavanaugh also issued an opinion in Dobbs. This is pertinent here. He wrote that he agrees with the majority when they said there was no constitutional right for abortion. However, he did write that he believes there is "the constitutional right of interstate travel." Kavanaugh stated explicitly that he does not believe that any state can prohibit residents from traveling to other states to obtain an abortion.

Merrick Garland, the U.S. Attorney General, recently made the same point in a statement. Garland stated that "We acknowledge that traveling to seek reproductive care may not always be possible in all circumstances." "But, under the bedrock constitutional principles women who live in states that prohibit access to comprehensive reproductive health care must be allowed to seek it in those states."

Even if companies and abortion funds offer the money to allow people to travel across state lines to access abortion access, there are still legal questions. While states may not be in a position to prevent people from traveling, what happens when they return home? Smith agrees. What happens to clinics outside of states that offer abortion care in areas where it is illegal? What happens to an abortion fund or company that assists a resident from a red state to get an abortion in another state?

Stephen L. Carter, a Yale Law School professor, wrote in a recent opinion piece in The Washington Post that he agreed with Kavanaugh about states' inability to prohibit residents from seeking abortions in other states. He adds that "if the travel is funded by an in-state actor" (aEUR) such as a local employer, abortion fund, or other funding source, then "the case might turn out differently."

Already, state leaders have signaled that they will reduce funding for residents who want to obtain abortions outside of their states. After Citigroup had announced that it would finance interstate abortion travel in May, a Texas legislator threatened financial sanctions against Citigroup and other companies who have such a policy. The threats go beyond financial. Some leaders in states that have restricted abortions may try to make it a crime for state residents to obtain abortions inside or outside their state.

Smith states that there haven't been any new criminal laws to prohibit travel to states where abortion is legal. "But, we know that states will want to chill that activity and they're going try to do so through a variety.

Federal courts may allow states to ban companies and abortion funds from aiding interstate abortion travel. We don't know. Smith claims that the First Amendment protects speech. Therefore, abortion funds and providers should be able to provide information to residents in states where abortion is prohibited. She says that "making an appointment, financing that appointment, and driving them there is more than just giving information." Smith states that it's difficult to determine the exact risk because we haven’t yet seen any prosecutions.

We spoke with all the abortion funds concerned about Dobbs' legal maze. Schalit states, "There is no doubt that we and our client are operating in a heightened sense of fear and concern."