If this World Cup is already historic for everything that has surrounded the road to Qatar, almost nothing good, from this Thursday the tournament will also remain forever in the legend thanks to the perennial goal-scoring spirit of Cristiano Ronaldo. 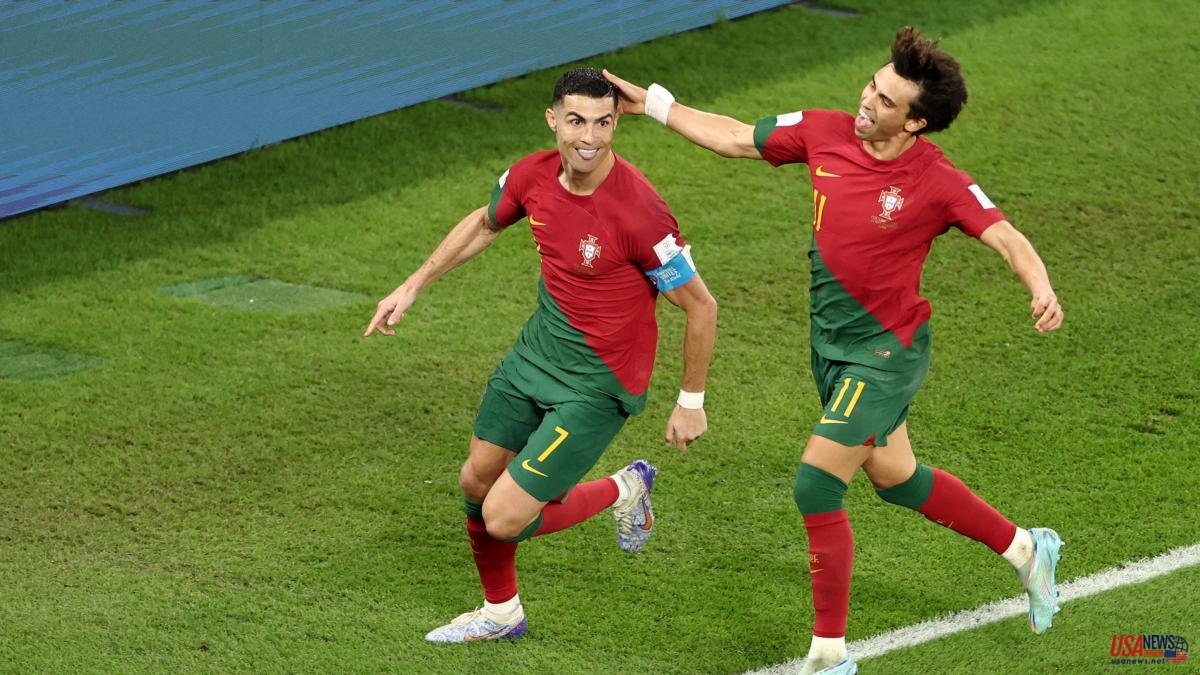 If this World Cup is already historic for everything that has surrounded the road to Qatar, almost nothing good, from this Thursday the tournament will also remain forever in the legend thanks to the perennial goal-scoring spirit of Cristiano Ronaldo. The Portuguese star scored from a penalty against Ghana, becoming the first footballer of all time to score in five different World Cups. Cristiano thus collaborated in the triumph of Portugal in its World Cup debut, in which he knocked down a Ghana in which only Kudus excelled. The brain of Ajax left the field with 1-1 and two minutes later the score already reflected the final 3-1. Bad moment Addo chose to do without his star.

All the interest of a tedious first half was concentrated in the first two arrivals of Cristiano Ronaldo, after which the duel faded almost until it faded to black towards the changing rooms. Now without a team, the Portuguese star was undoubtedly the most acclaimed man in the 974 stadium, a beauty, flirtatious and functional, built from containers on the shores of the Persian Gulf. Every time he touched the ball, the crowd, a clear Portuguese majority, went crazy, perhaps aware that he could attend a historic moment, as would happen later. It was nothing more than a continuation of the warm-up, when the former Manchester United striker already monopolized all the spotlights.

But if Cristiano in his last official duel, against Spain in Braga, already got dark on a couple of occasions of those that he transformed into a goal with his eyes closed in other times, something similar happened in the initial stretch of the duel against a defensive and seemingly harmless Ghana. Cristiano first received a filtered pass that left him alone against Ati-Zigi, against which he was unable to resolve. Shortly after, this time with his head, he also failed to inaugurate the light. If he wants to continue in the elite, he did not leave his best calling card to find a new destination, no matter how much he hit later from eleven meters, an instinct for penalties that he has not lost. Of course, the Madeira striker found the net after half an hour but the referee annulled the play due to a more than doubtful foul. The recital by the American Ismail Elfath would deserve another whole chronicle that would be summed up in the word disastrous.

All the afternoon action east of Doha was concentrated in the second half, surely the most vibrant of all that has taken place in the World Cup. The action began with Salisu's no-fault on Cristiano that ended with the legendary goal from the Portuguese. It didn't take long for Ghana to equalise. He did it through a play that of course was born in the head and boots of Kudus, who gave Ayew the goal. The goal was celebrated like a title by the spirited African fans.

Then came the key moment, when Addo opted to remove Kudus and everything fell apart for the black stars. In two minutes, João Félix and Leão fed the Portuguese account and seemed to ensure their first victory in the Qatari desert. A header from Bukari almost in added time added a touch of morbidity to the last minutes. A scenario that Diogo Costa joined in the last play, when Iñaki Williams played Tamudo's for Toni in the 2000 Cup final but the Athletic player slipped at the moment of finishing off. Ghana cried out to heaven and Portugal breathed.

Incidents: Match of the first day of group H played at the 974 stadium in Doha before 42,662 spectators, according to official data.