Portrait of a country in 25 debates

Days of preparation and confinement for President Pedro Sánchez and the parliamentary leaders who this week will go up to the rostrum of Congress in the twenty-sixth debate on the state of the nation. 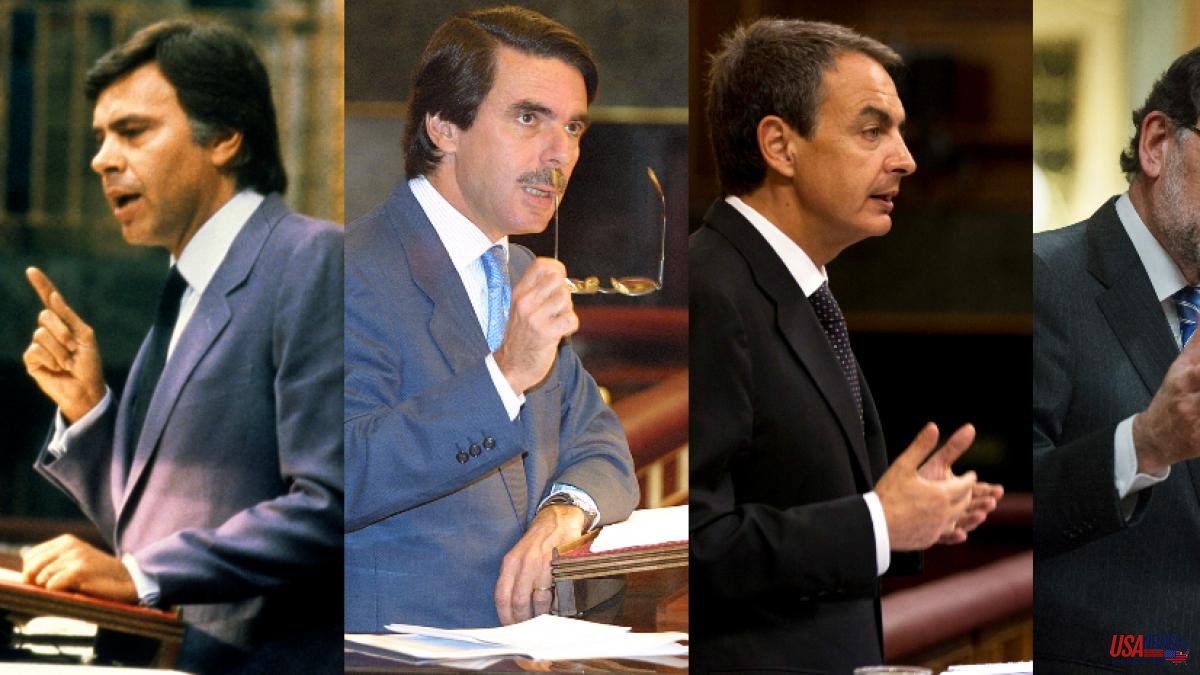 Days of preparation and confinement for President Pedro Sánchez and the parliamentary leaders who this week will go up to the rostrum of Congress in the twenty-sixth debate on the state of the nation. The teams of advisers fine-tune the battery of arguments seven years after the last great debate that takes the pulse of the political situation in the country was held and that was established in 1983 by Felipe González to take place every year, except the electoral ones . Much has happened since in February 2015 the then president Mariano Rajoy and Pedro Sánchez, as head of the opposition, faced each other in the gallery.

The 25 debates that have taken place since 1983 serve as a portrait of the country's trajectory since González was inspired by the State of the Union Address and transferred it to Spain, from the United States. Unlike this, it is a parliamentary custom and is not regulated. It is structured following the pattern of the investiture debates with unlimited intervention time for the president and 30 minutes for the representatives of the parliamentary groups in his first intervention.

González's journey in the first debate drew the context of a country with a recent coup attempt and marked by the economic situation -with 15% inflation-, a construction of the State of the autonomies led by the pro-autonomy sentence of the Constitutional Court against Loapa –the law that wanted to stop the decentralization process-, terrorism –ETA had murdered 23 people in the first year of the PSOE's legislature– and citizen insecurity. Annual appointments whose global analysis has been by Luis Izquierdo, communication director of the former president of the Congress Ana Pastor, in the thesis The state of the nation: 30 years of the History of Spain.

A Felipe González who faces Manuel Fraga on three occasions, and where the great issues of the 1980s emerge. Among others, joining the European Economic Community, the NATO referendum or the 1988 general strike.

An annual event that also describes the trajectory of the first opposition party. Fraga's march to Galicia and the fleeting Antonio Hernández Mancha in the PP. And the arrival of Aznar in the 90s with his first lost duels against González and his progressive consolidation while the PSOE is being consumed by corruption cases. The historic “go away, Mr. González” dates back to 1994. In 1997, the leader of the PSOE held his last debate as head of the opposition. From then on they pass through the Josep Borrell tribune, in a debate in which he lost with Aznar leading him to resign. And then Joaquín Almunia came and went.

With the absolute majority of the PP in 2000, the newcomer José Luis Rodríguez Zapatero lands, breaking the tone of the speech based on "mood". The Spain that opens the new century speaks of immigration and the entry into circulation of the euro. But in 2001, the 9/11 attack, accompanied by the turn of the PP in foreign policy, marks a new course that will lead to support for the United States in the war in Iraq.

Zapatero celebrates his first debate as president in 2005. A few months have passed since the Madrid attack of 11-M and Rajoy is the leader of the opposition. Foreign policy changes, the anti-terrorist pact is broken in what is the beginning of the negotiation with ETA, the laws of extension of rights are presented - same-sex marriage. And the debate on the new Statute bursts into Congress.

Entered the new century, Zapatero did not want to see the economic crisis that hovered over Spain. In 2011 he said goodbye with the crisis and the Constitutional ruling on the Statute marking the political agenda. Rajoy arrived at Moncloa and took over from the opposition Alfredo Pérez Rubalcaba, who in the 2013 debate brought up the Bárcenas case, whose shadows gripped the PP.

In this tour it would be necessary to refer to the role of many groups, and especially CiU, whose speakers have also marked history in Congress. Josep Antoni Duran Lleida warned Rajoy 7 years ago that from lawsuit to lawsuit he could end up with a unilateral declaration of independence. Portraits of a country.