The King's speech on Christmas Eve lasted 11 minutes and 38 seconds, 12 minutes and 25 seconds if the hymns are included; a speech that advocated coexistence and the unity of Spain in which he urged the institutions to settle the current institutional crisis. 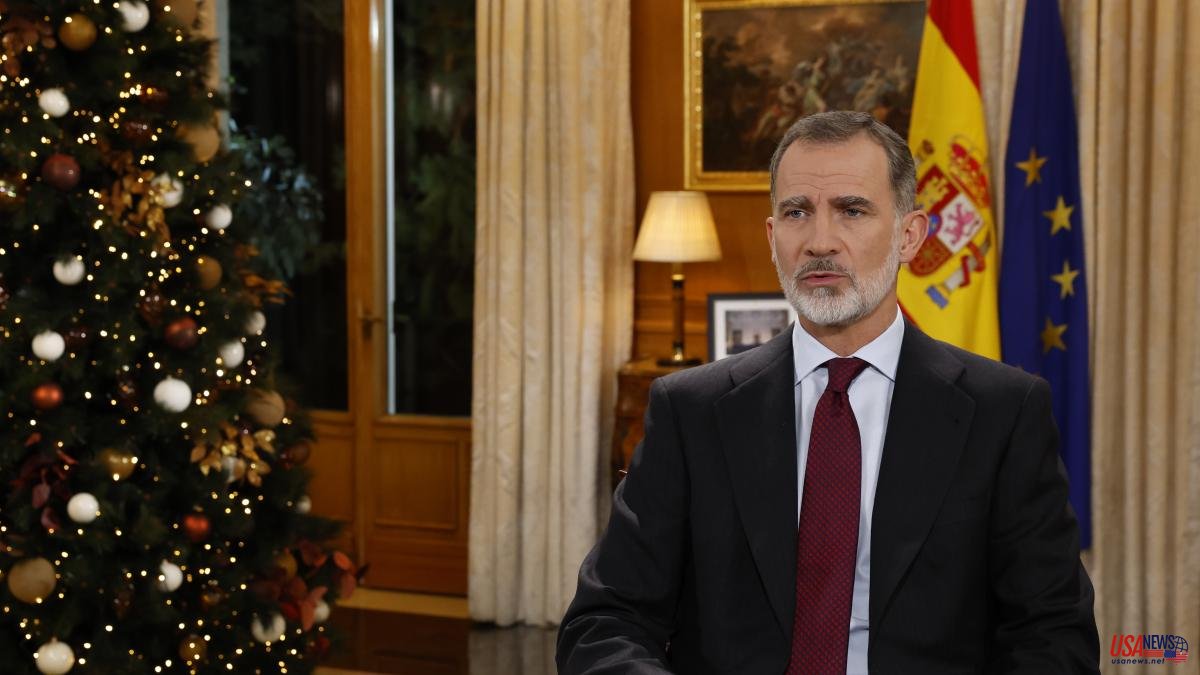 The King's speech on Christmas Eve lasted 11 minutes and 38 seconds, 12 minutes and 25 seconds if the hymns are included; a speech that advocated coexistence and the unity of Spain in which he urged the institutions to settle the current institutional crisis. The place where Felipe VI delivered the speech is the Audience Hall of the Palacio de La Zarzuela

The PSOE has affirmed this Saturday that the Christmas speech given by King Felipe VI shows that the monarch "is aware of the country's challenges" and aware of the need to maintain unity and respect the Constitution.

"HM King Felipe VI's message shows that we have a Head of State aware of the country's challenges, Europeanist and aware that only from unity, respect for the Constitution and the integrity of the institutions in difficult times, Spain can move forward", said the PSOE through its account on the social network Twitter.

The president of the Popular Party has supported the monarch's speech without nuances. Alberto Núñez Feijóo has assured that his political formation shares "the great speech" of Felipe VI "in defense of the Constitution, the legacy of the Transition and the strength of the institutions in the face of the challenges we face."

Gabriel Rufián, ERC spokesman in Congress, reacted tonight to the king's Christmas speech by posting on the networks a photo of the monarch, as a child, shaking hands with Franco and the following sentence: "We must not forget our origins."

For Cuca Gamarra, general secretary of the PP: "King Felipe VI shows us the way to improve our future as a nation. Successful calls for harmony, constitutional values ​​and the general interest to strengthen our institutions."

Isabel Díaz Ayuso (PP), president of the Community of Madrid, appreciates that the King affirms that Spain is "one of the great nations of the world", and how much is owed to the constitution.

Carlos Iturgáiz, president of the PP of the Basque Country, describes as "brilliant" Christmas message from H.M. King Felipe VI.

The president of Ciudadanos, Inés Arrimadas, highlighted this Saturday that King Felipe VI "has delivered a speech at the height of the seriousness of the moment that Spain is experiencing" and added that "he has been enormously successful" with his proposal for a solution.

"The head of state has delivered a speech at the height of the seriousness of the moment that Spain is experiencing and has been enormously successful in indicating the solutions: unity, coexistence and strong institutions," Arrimadas said in a message on his account on the network social Twitter.

Carlos Carrizosa, president of the parliamentary group of Citizens in Catalonia: "We Spaniards are very lucky with His Majesty King Felipe VI. Once again, rising to the occasion and warning about the threats to our democracy. Merry Christmas and long live Spain!"

For its part, Vox has highlighted in a tweet the King's call for Spanish unity, coexistence and the strengthening of institutions.

The president of the Junta de Andalucía, Juanma Moreno, has valued this Saturday the call of King Felipe VI to strengthen coexistence and institutions in his traditional Christmas message and has guaranteed that Andalusia will continue "contributing to that necessary spirit of unity with ok".

The deputy of EH Bildu, Jon Inarritu, has reproached the monarch for not having referred "directly to the greatest institutional crisis after the coup of the Constitutional Court" when blocking his own renewal.

And Greenspeace Spain also criticizes the null mention of the environmental crisis in the momarca's speech.