Political anxiety in Argentina after the attempt to assassinate Cristina Fernández

The assassination attempt on the vice president and former president (2007-2015), Cristina Fernández, has generated mixed reactions in Argentine society. 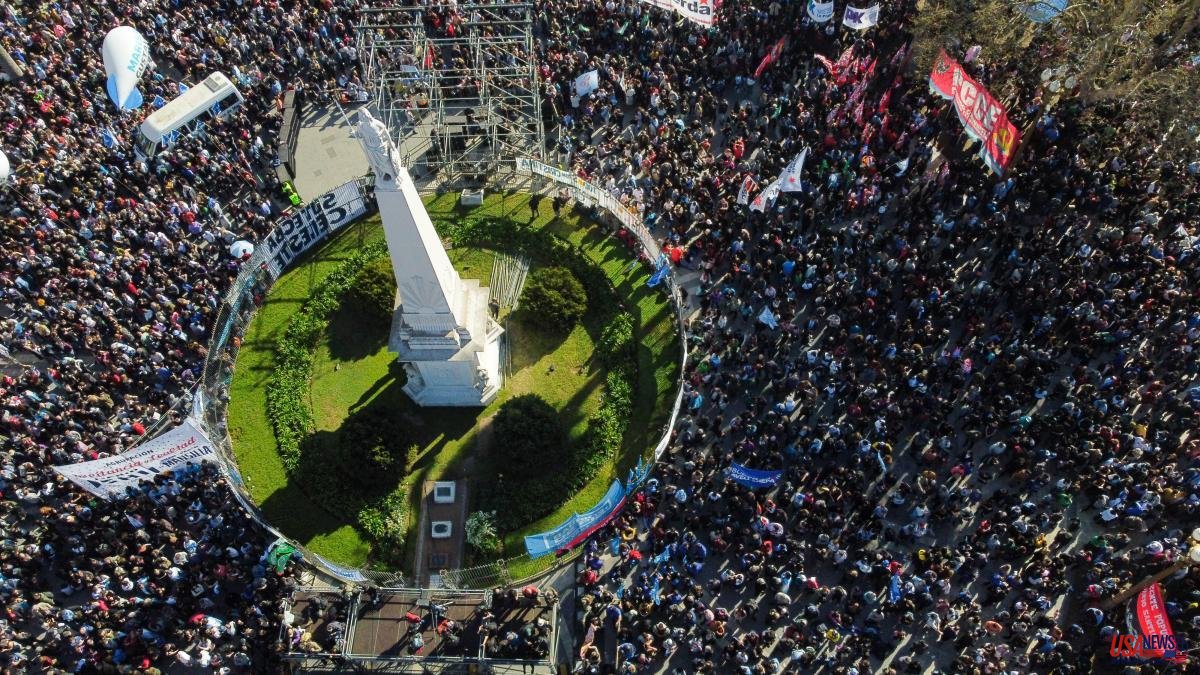 The assassination attempt on the vice president and former president (2007-2015), Cristina Fernández, has generated mixed reactions in Argentine society. Buenos Aires woke up this Friday interrupted by the movement of a population that marched towards Plaza de Mayo, the destination par excellence to express their repudiation of a situation that was believed to have been forgotten since the time of the coups.

Thousands of Argentines responded to the call of the president, Alberto Fernández, to mobilize in "defense of democracy and in solidarity with the vice president", after a 35-year-old young man pointed and pulled the trigger twice in front of the former president's face.

Social, union and political organizations related to the ruling party and citizens marched through various sectors of the capital to concentrate on a massive demonstration in the Plaza de Mayo, in front of the Casa Rosada, headquarters of the Argentine Executive.

The Argentine president, Alberto Fernández, had repudiated the "attack" on Thursday night in a message on the national network and decreed this Friday as a non-working day so that citizens can express themselves in the streets against violence.

Fernández led a meeting this Friday at the Executive headquarters with governors, union, social, business and human rights representatives, where he warned that "media hate speech" must end after the attack.

"Cristina (Fernández) has been the object of persecution for many years, that is why we cannot continue to watch complacently as she is stigmatized and disqualified," said the president, who had summoned representatives of various sectors to the Executive headquarters to "build a broad consensus against hate speech and violence” after the attempted assassination of the vice president.

“It is necessary to warn that we must put an end to media hate speech, because the things that are said are very impressive,” he added, according to the Presidency statement.

“All of us who are here are part of the democratic community, and therefore the first thing we have to do is say enough to make habitual what should not be habitual; to tolerate what we should not live with, because democracy requires us to respect the other”, he stressed.

The president highlighted the "common points" expressed during the meeting, which have to do with "putting back into practice a democratic pact where violence is excluded, hate speech is eliminated and respect is a value," according to the release.

In the document read at the end of the march, a call was made "for national unity, but not at any price." The person in charge of giving voice to these words was the head of the Argentine Association of Actors, Alejandra Darín, before the Casa Rosada to close the massive march, surrounded by ministers of the national Executive, politicians, trade unionists and leaders of Human Rights organizations aligned with Kirchnerism: "The hatred outside".

The document read by the actress targeted the media and the opposition: "For several years, a tiny sector of the political leadership and its supporters' media has been repeating a speech of hate, of denial of the other, of stigmatization, of criminalization of any popular leader or related to Peronism, and even of any sympathizer.

The word "miracle" was widely repeated throughout the day, among many of the people who showed their support for Cristina, as is the case of the teacher and retiree, Julia Sanz, who moved with her husband, Carlos Gómez, a policeman remote, from the province of Entre Ríos (coastal) to the Argentine capital.

“Only a miracle allowed Cristina to be reborn because the intention was to kill her. I realized what had happened when I saw her leave her house. She came out, she approached us, we greeted her and I was able to kiss her hands, something that she would not have experienced if it had not been for a miracle, "Julia told Efe.

For his part, Carlos considers that the perpetrator of the attack responds to the logic of irrational hatred of popular governments fueled for many years. He clarifies that he does not feel anger at what happened, but he does feel the need to remove violent attitudes from politics.

"This way of resolving the political conflict that certain right-wing or certain conservatisms have always had is something that must be banished forever from the politics of all countries," he told Efe.

Among the tide of people that covers every square centimeter of the square, is Elea Miranda, a young dance teacher and history student, who says she is not positioned under any "flag", although a gray sweater with the face of Eva Perón, gave her away

“I found out while I was studying, I had to take a midterm for college and I couldn't concentrate. When I was done and saw what happened it was quite shocking,” she recounted.

"At first it seemed like a staging, but when I analyzed it well I realized that they wanted to 'lower' it. It was a miracle or Néstor (Kirchner, former president and husband of Cristina Fernández) took care of her from above”, Elea summarized.

"It is necessary to support her, she is the referent of the popular mass and the first woman elected in a democratic way and the great leader after Eva Perón", he concluded.

Both for Elea and for many other young people, the repudiation of the assassination attempt would have been generated in equal measure, even if it was another political faction that governed the country.

While the people marched in defense of the vice president, she left her apartment in the Buenos Aires neighborhood of Recoleta to be transferred to another, "safer" place. Even so, she took the time to greet those who came to her home to give her encouragement.

According to a florist in the area, who preferred to identify himself as Ariel Flores, the residents of the neighborhood were upset since the vigil began, after Fernández was accused of corruption by a federal prosecutor and requested twelve years in prison and disqualification from hold public office.

"The holiday was somewhat complicated and did not generate the necessary sales, but we continue working," he assured.

Another neighbor of the neighborhood, Cecilia Irrazabal, a public English translator, went to the house of the former head of state to accompany her family.

“Everything seemed strange to me, because before a president of these characteristics it is difficult to understand how she was left so alone and exposed. She was very exposed, very close to people and maybe it is her style, but she is very susceptible to being attacked, ”she reflected.

For Cecilia, it is necessary for the population to repudiate what happened, although she does not consider that decreeing a holiday for this reason was urgent.

"Not all of us work as employees in a dependency relationship, so this measure is well intentioned, but it does not reach everyone equally," he concluded.

The detainee for attacking the vice president is a 35-year-old man of Brazilian nationality who does not have a criminal record in his country of origin, while the weapon seized from the suspect is an automatic 32-caliber Bersa, which, at its base, has a number partial 250, suitable for firing, according to the Ministry of Security.

Federal judge María Eugenia Capuchetti, responsible for the investigation of the attempted attack against the Argentine vice president, visited Fernández at her home on Friday to take a statement, after inspecting the area in the early hours of the morning.

The president of Argentina, Alberto Fernández, also went to the house, where he stayed for 50 minutes.

Later, Cristina Fernández left the home in front of which she suffered the attack without making a statement, but, moved, she took a few moments to greet her followers before getting into a vehicle with her guards.

The attack on Cristina Fernández aroused solidarity and rejection from leaders around the world.

Pope Francis showed his "solidarity and closeness" with the vice president of Argentina and advocated that "social harmony always prevail" in his country and reject "all kinds of violence and aggression", in a telegram sent this Friday to Cristina Fernández , while spokesmen for the former president added that he also called her on the phone.

The Secretary of State of the United States, Antony Blinken, condemned "strongly" this Friday the assassination attempt and expressed his "rejection of violence and hatred", in a message on Twitter.

The president of Brazil, Jair Bolsonaro, regretted the attack and recalled the attack suffered by him during the 2018 electoral campaign: "I already sent him a little note. I'm sorry. Now, when I received the knife, there were people who celebrated it."

The Government of Chile also rejected and condemned "the assassination attempt" and expressed "its firm solidarity and commitment to the Government and sister Argentine people," according to a statement from its Foreign Ministry.

In addition, the UN Secretary General, António Guterres, condemned the attack and was "shocked" by the event, according to the spokeswoman, Eri Kaneko, when asked about it during a press conference.